Those looking for a great party-game fix should give Rakugaki Showtime a look.

Treasure has never aimed for the center and, thankfully, probably never will. Rakugaki Showtime tackles the venerable institution of the competitive party game and benefits from Treasure's dose of genre-bending game mechanics.

Loosely translated as "Doodle Showtime," Rakugaki Showtime chronicles the story of four doodles who fight the evil Big Daddy and his scribbled minions. Using the power of the smiley ball, Yukiwo, Sasami, Pitan, and Tsubohachi uphold the law of the Godhand that had drawn them in the first place.

Rakugaki borrows its basic pick-up-and-throw concept from Konami's Poy Poy and builds on it, adding to the strategy and the spazziness. The concept is simple - to be the last one alive on the field. To achieve this goal, you must balance offense and defense. While the characters have a handful of close-range fighting moves at their disposal, most of the damage you cause will come from throwing things. You can throw things in one of two ways - directed or homing. Directed lets you chuck the object in-hand at any one of the pads located on the outskirts of the playing field, while homing lets you target the opponent closest to you. While you'll use homing more often, directed can let you strategically detonate explosives from across the field. In addition to black-hole bombs, ICBMs, and standard-issue boulders, Rakugaki Showtime features the ever-versatile smiley ball. Although happy at first, the smiley ball gradually becomes angrier the more it's flung about. When it finally reaches the pinnacle of anger (announced with a choral "Hallelujah"), you can relieve the grinning ball of its rage and unleash one of three character-specific super moves. While most of the super moves are purely offensive, some characters' attacks have defensive or healing qualities.

Movement is also key to survival in Rakugaki Showtime - it is what makes the game as spastic as it is. Movement, for the most part, is based on jumping. You can perform a standard jump in place to dodge attacks, or you can jump to one of the pads located around the board with an extra tap of the jump button. With additional taps, you can cancel your jump in midair and drop back down to the ground or bound from pad to pad. The result is an incredibly fast-paced game that takes some getting used to - between the camera panning, constant bounding across the field, and projectiles hurtling through the air, Rakugaki's insane action can be a little overwhelming.

Each play-through of the game takes roughly 30-45 minutes, depending on your skill. After winning the game with a particular character, you will be awarded access to one of the enemy characters for both single and multiplayer play. With seventeen characters, there'll be plenty of variety for all.

As fun and different Rakugaki is, its decidedly Japanese graphics are unlikely to appeal to many. The characters look as though they've been doodled on paper cutouts, with hastily scribbled colors constantly shifting within their crude borders. While the backgrounds are fully 3D, they're largely untextured and flat in appearance. The simple graphics do give the game a certain weird charm, however, and also allow for the fast and furious gameplay that makes the game stand out in the first place. The game's music is typically Treasure, mixing up a bevy of happy tunes with an odd rock bent. The game's sound effects go mostly unnoticed, with the exception of the aforementioned "Hallelujah!"

This game will never come out in the States. As much fun as it is - it's just too Japanese and way too out there, so it's a good thing the game is very importer-friendly. Those looking for a great party-game fix should give Rakugaki Showtime a look. 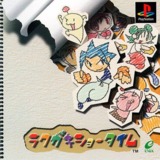 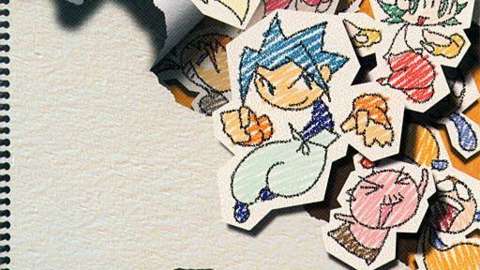 Those looking for a great party-game fix should give Rakugaki Showtime a look.