It's not as sharp as its console counterparts, but this PC shooter still gets the job done.

The Rainbow Six team is the embodiment of Teddy Roosevelt's call to "Speak softly and carry a big stick." They're certainly discreet, and with their terrifying arsenal, they hit hard enough to make a baseball bat wince. But Teddy didn't say anything about carrying a monster rig, and unfortunately, that's exactly what you'll need to get the pop you'd expect from Ubisoft's Rainbow Six Vegas 2 for the PC. And even then, the PC version of this great tactical shooter doesn't quite measure up to the performances found on the Xbox 360 and PS3 versions. The AI seems even less capable than before, and the textures break, as does the frame rate whenever there's heavy action onscreen. The game is certainly playable, and can still be a lot of fun despite these shortcomings; it's even possible that gamers with the right rig won't experience any of these hitches. But on both of our test machines, which easily exceeded the recommended system requirements, Rainbow Six Vegas 2 ran with a limp even with many of its graphical bells and whistles set to low or off.

Nevertheless, this game is locked and loaded with enough good content to keep a small army waging virtual war for months. There's an entertaining single-player campaign, a terrorist hunt mode to fool around with once you've played through the story, and rich online play. You can gain currency to spend on decking out your agent either online or off, and a new sprint button speeds up all the action.

The story in the campaign mode won't have you on the edge of your seat wondering what will happen next, though the action will. You and your two teammates make your way through diverse off-the-strip Vegas locales climbing walls, shooting terrorists, and rescuing hostages. You're vaguely pursuing one or two terrorists in particular while looking out for chemical weapons, but you'll mostly focus on sneaking softly and then bashing terror with your big, fully automatic stick.

Although the tactical aspect of the Rainbow Six series has certainly diminished since the series debuted on the PC in 1998, the simple squad commands contained in Vegas 2 are still very satisfying. Having your teammates toss a flashbang in one door just before you enter another to catch the bad guys with their pants down never gets old, especially if you're cleaning the house with a good old shotgun. Your enemies will never know what hit them.

Then again, knowing things doesn't always seem to be the terrorists' strength. They occasionally walk backward into battle, as though what they can't see can't hurt them. Of course, you and your flashbangs know better, but this weird approach to gunfights didn't seem so prevalent in the console versions. Still, the terrorists are crafty and tough as often as they are dumb, so you're guaranteed several great firefights along with several silly ones.

Besides, the offline play is really just foreplay for the online matches. Jumping into one is quick and easy, and a couple of the new maps are awesome. Theater, in particular, is the new centerpiece of the online experience; it's the perfect place for a shootout, and it looks cool, too. As you rack up kills online or off, you gain experience points that can be spent decking out your soldier. Not only does this provide a good excuse to play dress-up, but in online matches you'll be able to distinguish the hardened killers from the wayward noobs by the cut of their jib and the color of their camo.

Unfortunately, other colors distinguish themselves in a less flattering fashion. Certain environmental textures tend to break in the direction of stunning blue or neon yellow. You'll be in a realistic-looking environment, for instance, but will notice that all the window frames, pipes, and doorknobs are unnaturally azure. Then, once you pass through an area, random details will be bright green--sometimes small things, other times entire rooftops and billboards. This probably won't happen on every setup, but since it happened on one, it will definitely happen on others.

Worse than the garish broken textures, though, is the slowdown. The game never feels perfectly fluid, but when you encounter an enemy and you both start shooting at each other, the frame rate leaves for a cigarette break, as though the action were just too intense for it. This half-second pause in the action is more than enough time for you to absorb one bullet too many.

Though Vegas 2's smooth frame rate didn't quite make it to the PC intact, the controls are as good as, if not better than ever. You have more than enough buttons on your average keyboard to easily access all of Vegas 2's many commands, and the single-player campaign will helpfully show you where everything is and what everything does, so you won't have to go thumbing through the instructions.

Rainbow Six Vegas 2 for the PC is the weakest of all the versions due to its poor optimization, broken textures, and questionable AI. However, it still features all the same action and content as its console counterparts, and it's a decent tactical shooter in its own right. Though its flaws and foibles prevent it from being something you'd want to pay the full price for, you could take riskier gambles than putting a couple chips down on Rainbow Six Vegas 2. 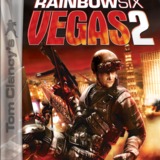