The pieces are in place for a fine adventure, but Rainbow Moon's shallow mechanics have limited appeal.

With two companions dead and an oozing blob quivering ominously nearby, the odds are heavily stacked against you. One ectoplasmic belly flop can instantly undo all of your hard-fought slaying. In situations where your back is against the wall, Rainbow Moon envelops you with its tactical delights. But such moments are rare. The pieces that provide the foundation for this strategy role-playing game are competently executed, but never coalesce into something substantial. So you lackadaisically complete quests and cut through swaths of enemies, hoping Rainbow Moon rises above its lesser elements. Alas, that time never arrives.

Set to square off against his malevolent nemesis, Baldren is unexpectedly whisked away to a foreign land through a mysterious portal. Upon landing in this unknown world, the hero finds that he wasn't the only creature to make it through the portal. Monsters now roam the countryside, invading people's homes and causing chaos in idyllic pastures. Once the plot is set in motion, the story fades into the background, letting you focus on killing baddies instead of watching non-interactive cutscenes. The emphasis on combat and exploration over storytelling keeps the pace moving along, but because there aren't interesting characters or plot developments to keep you engaged, there's little motivation to fix the wrongs you set in motion.

Townsfolk and creatures populate the brightly colored countryside. Talking to benevolent citizens queues up quests to take part in, and there's a healthy assortment of side missions to complement your more important quest goals. Exploration is important because people and items are located in the oddest places, so poking your head into every nook reaps plenty of rewards. It's unfortunate that the simple act of walking is handled so clumsily. Impenetrable boundaries carve the world into a series of elaborate mazes, and it's not always clear where you can and cannot pass. You might be able to step under a tree in one place but have to run around another one later on, and such discrepancies make it feel as if you're searching for weak points rather than freely exploring this strange world.

It's a small problem, but one emblematic of the way Rainbow Moon is designed. Every element is adequately done, but each is hampered by a number of noticeable faults. The many ups and downs in Rainbow Moon are on clear display in the combat encounters, which make up the vast majority of your adventuring. Enter into fights by making contact with a monster blocking your path and you're warped to a grid-based battlefield to settle your differences with swords and arrows. The absence of random battles is a smart design decision, considering how often you have to backtrack, and you'll never want for combat because you can enter into a duel just about whenever the mood hits you.

Like exploration, fights have an isometric perspective, though the view isn't zoomed out quite enough to let you take in the entire arena in one shot. Combat plays out in a predictable, yet enjoyable manner. Once it's your turn to move, you can position your character elsewhere, attack an enemy with a standard attack, use an item, or execute a skill. Skills are the most important abilities in your repertoire. These are powerful attacks and handy buffs which can be bought at stores and given to specific characters. Using this framework, you and your enemies circle the battlefield, moving in for attacks when the opportunity presents itself or retreating to heal when your health gets low. There's a sleepy rhythm that elicits some satisfaction when you conquer your foes, but rarely provides the energy to be exciting.

Disappointingly, there's little depth in the combat mechanics. In other tactical RPGs, you gain attack bonuses based on your position. For instance, clambering to higher ground might improve your range or striking a foe in the back might yield more damage, but such intricacies are absent here. Positioning is a simple consideration, so as long as you're lined up with your foe, the door is open to whale away at them. Furthermore, your enemies rarely present a challenge. Outside of the hardest boss battles, enemies are pushovers, so you cleave through them without having to put much thought into your actions. Although the core of Rainbow Moon's combat is fine, it's so shallow that it fails to engage for long.

Further problems arise in the leveling system. By defeating foes, you earn experience points, and you gradually become a more adept fighter as you gain levels. Although this process is automated, there's a separate system that lets you fine tune your attributes. Characters earn rainbow pearls when they deliver the final blow to an enemy. Earn enough pearls and you can directly upgrade your strength, speed, and other attributes. Problems crop up when new characters join your group. New party members are frequently lower in level than your veteran characters, so if you want them to match the characters you've been playing as, they have to finish off enemies. Because they are often weak and slow, you have to wait around in battles until they can snuff out an enemy's life. This is a tedious process. Juggling your lineup wastes valuable time, dragging the quick pacing down. And because characters only level up when they're active members of your party, experimentation is kept to a minimum.

It's a shame there are so many problems with the core components because Rainbow Moon is quite enjoyable at times. Powerful enemies (usually part of a side quest) roam the land, some much stronger than you, so there's a constant pull to become stronger so you can finally stand in the same arena as these creatures. There's an undeniable rush when you finally topple a being who has hounded you for hours, and that blood lust pushes you forward to see what new beasts there are to slay. This lure is present in many role-playing games, however, and there's nothing Rainbow Moon does to separate itself from the crowd. Even with dozens of hours of content, Rainbow Moon is a flawed and uneven adventure that stumbles as often as it entertains. 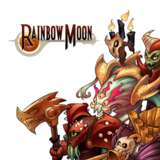 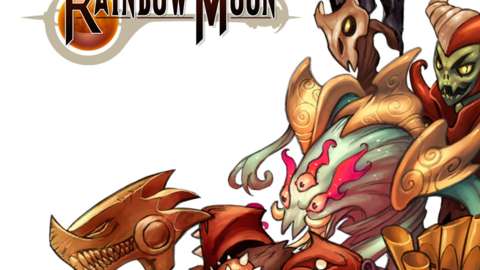 Rainbow Moon is a strategic role-playing game with a strong emphasis on character development.