Railroad Tycoon II gives you the responsibility of running your own railroad and charges you with the task of turning a tiny company into a powerful empire. Although it is a somewhat simplified version of its PC and PlayStation relatives, the objective of the Dreamcast version can be just as daunting. Not only must you worry about laying track, managing stations, hauling cargo, and keeping your trains running, but you must also keep an eye on the stock market and maintain the country's economy. All of this translates into one immersive experience, as Railroad Tycoon II successfully re-creates the burdened feeling the owners of actual railroads must have felt.

There are three game modes: a campaign mode, which places you in a preset scenario and gives you certain objectives to complete within an established time limit; a scenario mode, which lets you pick a map, a date, and a difficulty level then simply lets you build a railroad; and a tutorial mode, which offers an explanation of the various menus and shows you how to successfully manage your empire. The sandbox mode, where you're given an unlimited supply of resources so you can build the railroad of your dreams without having to worry about profits or reality, has now been made a submode inside the scenario mode. The true flexibility of Railroad Tycoon II is found in the different configurations for each mode. The campaign mode lets you decide what advantage your company starts with, and the scenario mode lets you set several different variables - from profit multiplier, to economic model, to AI difficulty. In addition, while the towns and landmasses of the maps never change, different plants and town demands are randomized in the scenario mode, ensuring that you never play the same game twice.

Most of the game is viewed in the actual map window, where you can see your railroad's layout and watch your trains move from one station to the next. Lining the sides of the map window are different submenus, which allow you to manage other areas of your railroad - from purchasing trains and assigning routes and cargo to upgrading stations and playing with the stock market. All of these submenus have buttons that lead into each other, making moving through screens and managing all the different aspects of your empire quick and easy. Once you've made your run through the different menus, you can return to the map window to watch your empire grow. Console controllers usually don't lend themselves well to a game so dependent on a cursor, and the Dreamcast version of Railroad Tycoon II tries to overcome this problem by using a combination of the analog and digital controls. You use the analog function to move the cursor exactly as a mouse would, while the D-pad is used to quickly move the map about. Unfortunately, the D-Pad is a bit too fast, and the analog controller is way too slow. An option to adjust the controller sensitivity would have been nice. The game does feature keyboard support and might work with the Dreamcast mouse when it's released here in the US. Railroad Tycoon II tries to make up for the unresponsive cursor with a ton of controller shortcuts. Though they take some time to get used to, the shortcuts make moving between screens much easier. Unfortunately, the interface has changed considerably from the PlayStation version, and it's more difficult to use - the buttons aren't as well managed, and some of the menu screens are just downright confusing.

Railroad Tycoon II takes place in actual global locations, including the British Isles, Korea, and the Midwestern United States. Each map is realistically detailed, giving Railroad Tycoon II a refreshingly realistic feel to it. In addition, inventions and scientific progress occurs according to real-life dates. New engines are introduced into the game in exactly the same year they were in real history, events occur on their actual dates, and the railroad companies you control in the campaign mode are actual historical railroad companies that achieved the goals of the campaigns you're playing.

The Dreamcast version of Railroad Tycoon II has upped the graphical ante with new completely 3D graphics. Now when you zoom in and out of the map, buildings take on additional dimensions and look fairly realistic. Unfortunately, the zooming effect looks really poor, and the 3D objects, while pleasing to the eye, get in the way of the actual gameplay - large 3D buildings and odd camera angles often make it somewhat difficult to gauge the terrain and lay track. The various buildings and plants have their own distinctive appearances, and once you learn which building produces what, it's easy to tell what cargo should go where. In addition, your trains look different, depending on the engine and the kind of cargo you're running. This makes managing cargo that much easier, as you can easily identify what needs to be shipped simply by looking at the cars. The sound department has been enhanced in this version, but not very much. The bluegrass soundtrack now plays over both the menu screens and the actual game, but there are only a few songs on the soundtrack, and they repeat endlessly. The sound effects don't seem to have changed any from the PlayStation version - your trains make chug-a-lug sounds when they move, whistles blow, wheels grind, and the cha-ching noise of cash registers signifies that cargo has been transferred to the appropriate station.

Solid gameplay, numerous options, and attention to detail make Railroad Tycoon II an excellent simulation. While the premise of running a virtual railroad might not be as exciting as the premises of other sim games, Railroad Tycoon II keeps things interesting with a complex game mechanic that hides behind a simple layout. 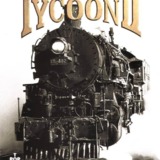