The postapocalyptic future looks better than ever. From the moment you step out under the brilliant, cloud-studded sky of a ruined world, Rage proclaims its technical and artistic mastery. As you drive along dirt roads through narrow canyons among the hardscrabble outposts of civilization, every environmental element pops with an amazing level of detail. As you converse with the people you meet, their expressive faces and believable dialogue have you eager to hear what they'll say next. And as you blast your way through your snarling enemies, their battlefield behavior and gory deaths make you feel like a powerful fighter. This is a gorgeous world that makes you excited to go exploring, but there is disappointingly little to find off the beaten path. The richness of Rage makes you wish it were even richer, and you may also find yourself wishing for a better story, a more accommodating save system, and more robust ways to enjoy this world with friends. But your lengthy adventure is exciting and rewarding all the same, and the stunning landscape alone is practically worth the price of admission.

Having slept snugly through an extinction-level event in a sealed government refuge, you awaken to find that your fellow sleepers were not so lucky. Alone and unsure, you step out into the world, encounter some savage locals, and end up indebted to a local sharpshooter. He explains that survivors like you haven't been seen in a long time, and proceeds to ask you for a favor. Thus begins your journey of helping out the friendly folks of the Wasteland with your natural affinity for driving, collecting, and killing. Each new person you meet is a delight, thanks to stylish character design, expressive animation, and great voice acting. It's a pleasure to visit the local bar where the freckled proprietor pays you a regular bounty and the garish dealer entices you to play another round of a collectible card game. This is a world where a sweet young lady teaches you about a flying implement of decapitation, and the puffed-up mayor sends you on a delivery run to a hand-wringing doctor and his possibly sentient mechanical familiar. Rage's characters are so charismatic that you'll likely be disappointed when your conversations end and will be eagerly anticipating the next interaction.

The towns and settlements where you find these folks are richly detailed and beg to be explored. Observant players are rewarded with a raft of thoughtful artistic touches, including some cute references to certain iconic video games. As you travel outside these havens and around the spacious environs, you encounter the skeletal remains of freeways and industrial complexes. Some have been appropriated by the locals, while others are left to molder, but all are vividly detailed. These man-made elements are surrounded by striking sandstone cliffs and scrubby vegetation, and they all come together to create a cohesive and absorbing landscape. Rage makes you want to regularly stop and gawk at the world around you, and the mercenary path you take gives you plenty of opportunities to do so. Your core missions eventually take a more purposeful path, but Rage does a poor job of drawing you into this crusade, so your quest to ensure a better future for humankind never feels more urgent than your task to bring a boozehound his missing moonshine. It's a shame that the game doesn't leverage its enticing world to create a stronger, more compelling adventure, but it's still a joy to explore and inhabit the Wasteland.

Not all Wasteland inhabitants are friendly, however. Packs of bandits have taken up residence in their own little communities, and each group has its own look, combat tactics, and interior decorations. Keeping an eye out in these dens not only gives you a sense of how your enemies live, but can also yield ammunition, guns, collectible cards, and a wealth of detritus that can be sold or used to build helpful items from schematics you acquire. A timely bandage or health boost can toughen you up for a challenging fight, while a bladed wingstick or spidery robotic ally can add crucial firepower to your cause. Your bandit enemies shoot accurately and use cover, while your mutant enemies just run headlong toward you, albeit with some surprising evasive maneuvers. Despite the health items, replenishing health, and rechargeable defibrillation power at your disposal, you can die if you aren't careful. When you do, pray that you have manually saved your game recently, because Rage rarely autosaves, and you can lose significant progress if you aren't diligent. Unfortunately, this makes pausing to save your game as important to your progression as any in-game survival tactics, which feels like nothing so much as an annoyance from gaming's past intruding on the fun.

Fortunately, you have plenty of firepower available to help you avoid death and possible loss of progress. The shooting mechanics are solid, and though the guns in Rage's arsenal are fairly conventional, each one fires with a nice sense of weight. Things get interesting when you incorporate the many weapon-specific ammunition types, such as one that can turn your humble pistol into a powerful hand cannon. Some types merely deal more damage, while others add an extra explosive or electrical kick. The latter are helpful for taking down mechanical enemies, while the time delay on the former lets you take sinister delight in watching your enemies realize they are about to explode. Enemies in Rage die with style; some crawl on the ground, mortally wounded but still trying to kill you, while others lose limbs, heads, or complete corporeal integrity. Though it can be odd to fill an enemy with bullets and have him react only to the last one, Rage's visual prowess still adds an extra kick to these brutal kills.

When you're not engaged in firefights or friendly conversation, you spend a lot of time driving around the Wasteland. The various four-wheeled vehicles you come to own are fun to whip around in, and the stunning scenery is a constant source of enjoyment. As you drive from one area to the next, the quality of light changes based on the scenery, creating a nice sense of travel. Bandits frequently come after you, and with the application of firepower, expendable items, and some judicious ramming, you assert your vehicular dominance. There are items for field repairs if you take too much damage, and if you find yourself about to explode (or hung up on a rock or guardrail), you can call for a tow and instantly travel back to the nearest town for a reasonable price. You can upgrade your ride or earn a new set of keys by racing on the Wasteland circuit, but your opponents rarely put up enough of a fight to force a photo finish. The car improvements are worth your time, but if you want a tough race, the competitive online multiplayer is the place to go.

In Road Rage, up to four racers can compete in a few different modes that reward good driving and skilled shooting. Some are straight-up demolition derbies, while others require you to grab fallen meteors or race through checkpoints while avoiding your opponents' onslaughts. Road Rage is a fairly shallow experience, despite the variety of cars and weapons that you unlock as you level up, but it's a worthwhile diversion if you crave competition. You can also team up online in two-player cooperative missions that are very similar to some of the solo missions you embark on in the campaign. These so-called Legends of the Wasteland are nicely bookended by voice-overs that make you feel like your exploits will be talked about for years to come. In these stand-alone sorties, you must make do with a preset loadout and whatever you can find in the environment, killing enemies while trying to avoid damage in order to preserve your score multiplier. These are solid challenges to overcome, but with only nine missions, they're more of a nice bonus than a compelling reason to play.

That honor belongs to the lengthy campaign, which can last upward of 20 hours for avid racers and diligent questers. Though the story gets a bit too cliched, there is a robust amount of adventuring to be done in a world that rewards you for your attentions. Rage is a beautiful game that looks equally stunning with or without the hefty installation (which reduces the load times and is optional on the 360 but required on the PS3), so regardless of which platform you play on, you'll find a rich and rewarding adventure that sets a new visual standard for the postapocalyptic wasteland. 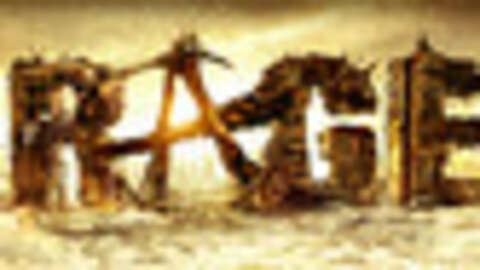 Rage is a first-person shooter from Bethesda set in the not-too-distant future where an asteroid impacts Earth, leaving a ravaged world behind.