Rafa Nadal Tennis isn't a good game, but it's not the worst tennis game available for the Nintendo DS.

Two-time French Open champ Rafael (or "Rafa," as his fans call him) Nadal currently holds the distinction of being ranked number two for more consecutive weeks than anyone in ATP history. Unfortunately for Nadal, much of his career has been played in the shadow of one of the most dominant players ever, Roger Federer. There is one thing that Rafa has that Federer doesn't, and that's a video game that bears his name and likeness. But this isn't something he's going to want to brag about when hanging out with the likes of Maria Sharapova. Thanks to poor controls, a paltry list of game modes, and a lack of real-life players not named Rafael Nadal, Rafa Nadal Tennis double-faults in its Nintendo DS debut.

What separates Rafa Nadal Tennis from other tennis games is that it's nearly impossible to play thanks to the default control scheme. This "innovative" scheme has you use the stylus to move your player and hit the ball. To serve, you hold the stylus on the screen as a power meter fills, and then you push the stylus toward where you want the serve to land. To move your player around the court, you touch the area where you want to go; to hit the ball, you make a quick slash toward where you want the ball go. This half-baked control scheme would hardly be ideal if it worked in the first place, but it's even worse because it doesn't really work at all. It's a crapshoot trying to figure out where the ball will land on a serve, but unlike the rest of the controls, serving at least somewhat works. It's incredibly difficult to get your player in position to hit the ball by the time it gets there, and it's even more difficult to actually hit the ball. Sometimes you won't swing; sometimes you'll swing late or early. Once in awhile, you will actually hit the ball. If you're truly blessed, you may even hit it where you're aiming! You can thankfully play with a more traditional control scheme that uses the D pad and buttons if you go to the game's options menu.

Once you've got controls that somewhat work at your disposal, you can play an exhibition match, start a career, or play multiplayer with up to three other people. Even though it supports game sharing, multiplayer is a bust thanks to laggy controls and choppy play. There are no minigames, so you'll want to start a career if you're looking to do anything other than play a single match. You start by creating a male or female tennis player in the poorly translated create-a-player menu. There aren't a whole lot of options available, but you can choose from a handful of different heads, shirts, and pants. Anyone who has played Virtua Tennis will notice more than a few similarities to Sega's popular tennis series when it comes to how the career mode is laid out. You select tournaments from a world map and unlock new tournaments as you win. You can spend your winnings on new rackets and clothes, and the credits you earn for winning matches can be used to improve your player's attributes. There's even lousy guitar rock playing in the background.

The game also plays like Virtua Tennis; a lousy Virtua Tennis, mind you, but the games do feel similar. As in Virtua Tennis, you simply need to get your player near the ball and swing; the computer will do the diving and trick shots for you. There's a button to hit a lob shot and another that lets you hit "winners." Apparently, Spanish developer Virtual Toys has a different definition of "winner" than the rest of the world, because a "winner" here usually hits the net or sails out of bounds. Your best chance to win a point is to keep a volley going until the CPU makes a mistake, which is rare once you get past the first few players. The game gets quite difficult and frustrating just a couple of matches into your career. The CPU players hit the ball so hard that it's difficult to see, and they never seem to fall for a lob or drop shot. Even if you're able to cope with the superspeed of the CPU, you'll almost certainly fall victim to the unresponsive controls. Yes, the traditional scheme is far better than the touch-screen malarkey, but that's like saying getting punched in the stomach is better than getting punched in the face. It's tough enough to get to one of the CPU's smashes, but it's impossible when your player decides to turn around and run the other way without your input. If you're able to coerce your player into getting into position to hit the ball, you'd better save some sweet talk for swinging, because your player will often ignore the fact that you're pressing the swing button and just watch the ball sail past. If that's not enough, it's tough to see the ball on grass courts, and it's extremely difficult to judge where the ball is on lob shots.

Rafa Nadal Tennis looks about as boring a game as you'll ever see, but at least the graphics are (mostly) functional. A solid frame rate is a bonus, and the action is fast, too. The courts aren't anything amazing, but there are a decent number of them. Player models are nondescript, but they're acceptable. There are a wide number of swing animations, and they look nice, even if players often make questionable decisions when it comes to what kind of stroke to use. Virtua Tennis-like rock tunes play during menu screens, and as far as music goes, that's it. The sound effects are nothing to get excited about. After each point, an announcer calls out the score, and a crowd that sounds dozens strong claps politely.

When played with the touch screen, Rafa Nadal Tennis is a complete disaster. However, it's much less offensive when you play with the D pad and face buttons. It's even possible to get a few good matches using the quickplay option. But there's not really any other way to enjoy the game. There are no minigames, and the career mode isn't much fun thanks to balancing and control issues. Rafa Nadal Tennis is better than the Nintendo DS's other tennis game--the unplayable Top Spin 2--but that's not saying a whole lot. 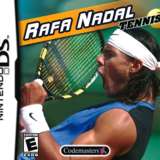