This slow-starting platformer is simple at times but builds up to a goofy good time.

Ever since the rabbids were introduced in the Rayman universe a few years ago, they've toiled away in a few fun-though-forgettable minigame collections but have never been given a full-blown adventure to match their outrageous personalities. In Rabbids Go Home, the shackles have finally been taken off, giving these ridiculous creatures a chance to run roughshod through the unsuspecting masses. This platformer captures the silliness these furry beings are known for, with gameplay that does a good job of complementing their antics. Unfortunately, the early stages of Rabbids Go Home are devoid of any challenge. With only a few weak enemies, you won't have to fear death, and the straightforward level design practically funnels you to the exit without any need for exploration. But once this shopping-cart adventure starts rolling, the enemies become more challenging, the levels begin to resemble an intricate maze, and the rabbids laugh and yell with insane glee the whole time.

For some reason, the earth-trapped rabbids get it in their heads that they are actually from the moon. There is no logic behind this idea, but that doesn't stop the furry white herd from doing everything it can to return home. Without a single rocket scientist among their ranks, they have to find a way to reach outer space without the benefits of a space shuttle. Their solution is to build a mountain out of all the trash, clothing, and other objects (whether they're bolted down or not) that humans have accumulated and produced through the years. You play as a pair of rabbids, one pushing a shopping cart while the other rides inside making room for all the goods, and run through airports, neighborhoods, and anywhere else humans can be found in search of enough stuff to stretch into the sky. The silly story ties into the rabbids goofy personalities, providing a reason for them to steal as many diapers and soda cans as possible, and has more than a few amusing scenes.

Your goal in every level is to collect as much stuff as possible while avoiding the traps and enemies that stand between you and your chance to return home. Objects you can collect are highlighted by a white circle, and you need only roll over these objects with your cart to add them to your stash. These items are littered all over stages, leading you through the main areas of each level, as well as pointing you in the direction of hidden sections that have even more stuff for you to collect. Apart from the obvious objects spread all over the place, there are some that require a little more effort than just running over stuff. Speakers and other destructible objects are placed high upon walls that you can shoot down by pointing at the screen and whipping a rabbid right at them. There are also humans--both aggressive and timid--who have clothes that would go a long way toward helping you reach your goal. By screaming near them, you strip them of their outer clothing and they prance away in their underwear, learning to never again cross a determined rabbid.

The early levels introduce you to the obsessive collecting needs of these rabbids, but they are far too simple to be engaging. There are very few detours or formidable foes, so it's way too easy to make your way to the end of the level unscathed, with more than enough junk in your basket. It can take an hour or so to get through these early sections, but once you do, the game gets considerably more fun. The human characters, who were so passive in the beginning, become fierce as you steal more and more of their precious goods. They'll attack you in a variety of ways such as engaging in hand-to-hand combat, unleashing their aggressive attack dogs, or by hurling bombs at you from afar, and trying to conquer them is quite entertaining. The level design also becomes far more interesting, forcing you to hunt for hidden paths to find enough junk to reach your goals. Although the game rarely gets difficult, defeating your enemies and navigating treacherous paths can be daunting, and it's a thrill to get past a nasty section and strip those bitter humans down to their Skivvies.

There are a few diversions that add some much needed variety to the standard shopping-cart action. During a few stages, you grab hold of an object that lets you jump, which makes Rabbids Go Home feel much closer to a traditional platformer. By shaking the remote, you can leap up to three times before you need to recharge, and there are a number of tricky situations in which you may find yourself. There are also levels that place you in an inner tube, although these levels don't take place in the water. Instead, they have you bouncing around a desert environment littered with cacti, and it takes only one brush with these bristled plants to stop you in your tracks. The traditional levels can get a little stale after awhile because your move set is so limited, but these different gameplay elements do a good job of breaking up the monotony.

The silliest part of Rabbids Go Home is the character creator. You can paint your rabbids, as well as rearrange their ears and eyes, or squash their heads. It may not seem like much, but you can create a huge variety of easily recognizable knockoffs, from Pikachu to Barack Obama, and it's a lot of fun trying to come up the most ridiculous creations possible. And that's really where Rabbids Go Home excels. The gameplay is too simple and easy at times, but the goofy characters and ridiculous premise keep things entertaining. It's also a lot of fun trying to collect every object in each level--unlocking hats, tattoos, and all sorts of other items to personalize your rabbids. After being stuck in minigames for a few years, Rabbids Go Home proves these crazy characters can carry their own adventure. 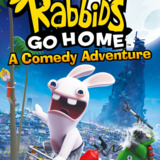 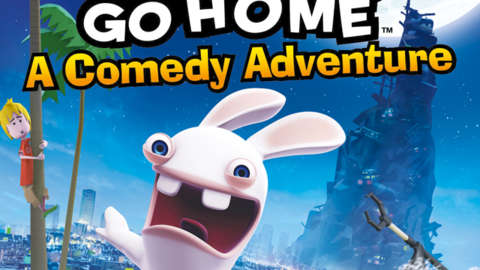 Control the Raving Rabbids as they climb home to the moon, while the battle the human revolt and the Verminators.