This turn-based strategy game accomplishes its mission but could stand a few upgrades.

R-Type Command is not a side-scrolling 2D shooter like all other R-Types before it. Rather, it is a turn-based strategy game that puts you in control of an ever-growing fleet fighting against familiar waves of alien enemies. Though the early going can be frustrating, the game quickly hits a pleasant cruise control, which can suck you in for hours of playtime. It manages to entertain without impressive graphics, a compelling story, or great unit balance. It does so by giving you huge fleets to toy with, lots of different kinds of ships, and interesting bosses to blow up. This isn't Advance Wars, but it is worth a look.

The story, which unfolds via text-based log entries, is a thin parable about the dangers of science and technology. At one point, your character writes (not verbatim) "This is why I wish scientists wouldn't mess with forces they don't understand." Never mind that he's writing this onboard a space station. The only cool aspect of the story is your character's name: Atlus Armada. Based on your performance in missions, you gain prefixes to this name. If you mess up, you become Silent April Fool Atlus. Or, if you win, you can become Keystone Bomber Atlus. Even better, at the victory screen for each mission, the game says something like "Keystone Bomber Atlus Armada Victorious!" as though it were one, huge heroic name. As great as it is to be called a Keystone Bomber, even grander names await, and you will probably look forward to them as you play.

When you are not marveling at the length of your name, you will fight the Bydo in outer space. Missions take place in areas divided into hexagonal grids. At the outset, there is a large blue patch of hexagons--this is where you may place your units. You'll also have to choose a ship to be your flagship; if this is destroyed, you lose. Once your ships are placed, each one can execute a movement and an action. This sounds simple, but when you have a dozen or more units, moving all of them is incredibly time-consuming. A simple "Advance All" feature that moved everyone toward a determined point would have saved hours of your time.

Though you occasionally find reinforcements, the ships you bring to a battle are the only ones you can count on, so you'll want to take care of them. On the other hand, each battle has a turn limit, which is usually around 35. So if you're too conservative, you may find yourself one shot from killing a boss who gets saved by the bell. In the early going, this limited units/limited turns dynamic is very frustrating. However, once you discover the magic of bombers and their incredible Balmung nuclear missiles, you'll coast through most of the game without having to worry about turns.

Bombers are way overpowered--they can move really far on any given turn, have the largest attack range, hit the hardest, and have some of the best defensive measures. They are rock, paper and scissors combined. There's some strategy involved in keeping your fodder units alive and making sure everyone is full up on ammo, but for the most part, R-Type's combat follows a simple rule of thumb: Shoot it with missiles.

Complexity attempts to enter the battle from several angles. All of your units will run out of ammunition and fuel, so you have to make sure to keep them restocked with little ammo droids. However, most of any ammo droid's time will be spent--you guessed it--restocking bombers. All of your fighter-type units have charge attacks that tend to do heavy damage in a straight line; however, if the unit takes damage, the charge meter (which gradually fills from turn to turn) will empty. Your enemies have such charge attacks, too, so identifying big hit threats early and tagging them before they can build up a big attack is important. This definitely adds a wrinkle to fights, and it's impressive to see the enemy AI pick out charge attackers then tag them with a shot.

Aside from flagships, fighters, and bombers, you also have forces. These are tough little balls of energy that you can either attach to your ships to make them hit harder or send into battle by themselves. There are two problems with forces--and one benefit. The problem is that you can develop all sorts of different types of forces, but it can be hard to figure out exactly which ships to couple them with (hint: the suffixes mostly match). It should be added that many little things in the game are difficult to grasp because there's no tutorial content. Another issue is that an uncoupled force moves really slowly, so it's always bringing up the rear. However, forces hit really hard and can take a beating, so when you finally do get them to the front of a battle, they live up to their names.

One of the main things that will keep you playing--aside from your ever more outlandish title (Pope Carpet Bagger Atlus Armada Louis Florentina de Gracia Victorious III)--is the fact that you can develop an ever-expanding roster of exotic ships. You have your flame ships, sonic ships, dudes in robo-suits with laser axes, tentacle forces--all sorts of stuff. However, they all cost a lot to develop, and resources are ridiculously scarce. Even worse, you can't sell back a unit once you've developed it, so if you make something you don't like, it just sits there. You can always grind and regrind levels you've beaten for more money, but when all you really need to succeed are three bombers and a bunch of fodder, there's little impetus to do so. Besides, who wants to grind?

Fortunately, there's plenty of R-Type Command to keep you busy without replaying old levels. It will take many hours just to clear your own space system of the alien menace--and that's only half the game. You can also engage in ad-hoc battles against another player with your own custom force, but be warned: Though these are more cerebrally stimulating than engagements against the AI, you better have really patient friends because each person's move can take several minutes.

Surprisingly, the computer also tends to take forever to move. Sometimes this can be chalked up to the size of the force it has to muster, but at other times, you'll know it only has a couple of ships left, and yet it will still dawdle. And this is just one dent in the game's technically unimpressive hull. The units themselves are just static 2D sprites, with one or two blinking lights; they're so old-school, they can only face one direction. Of course, the whole point is to capture the look of the classic R-Type games, and Command succeeds on that front. It's just a shame that the game's attempts to bring that look into the future met with such rough-looking results. Specifically, when units attack each other, a poorly rendered 3D cutscene is triggered. These always take too long to load and should be turned off. The only graphical bright spots are the big, crazy-looking bosses, which are interesting to regard as you fill them full of nuclear missiles.

Though it doesn't look space-aged, R-Type Command offers you a mildly entertaining future in which you'll spend hours and hours blasting aliens with rockets. It isn't chess, or even Advance Wars, but it's still fun to wield a huge fleet against the forces of evil while developing exotic new ships. It won't blow you away, but it can sure kill some time. 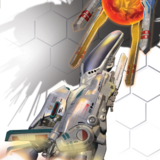