Its primary flaw is oversimplicity on all fronts.

Big and beautiful like Super Mario 64? With a great story like Final Fantasy VII? Quest 64 promised to be the first genuine RPG for the N64. And in a sense it succeeds at least in placing itself squarely in the genre. Beyond that, well... it's not a bad game, it just comes up a little short of our expectations. Its primary flaw is oversimplicity on all fronts. In an era when the best RPGs offer complex plotlines with flashbacks and time skips, betrayals and new alliances, Quest 64's plot seems skeletal and obvious. Though rendered in 3D, gameplay adheres to a very linear model that takes little advantage of 3D's inherent "explorability." Quest 64 falls short of both Mario 64's expansive 3D play and Final Fantasy VII's compelling twists and turns.

Like any good fantasy story, Quest 64's once-great-and-peaceful land is now in peril. The Spirit Tamers, keepers of magical lore and world peace, and friends to the elemental spirits, are worried. Their Great Book has disappeared. And the powers of chaos are rallying. And it's not safe to play in the woods anymore. You play Brian, an apprentice Spirit Tamer whose father, Lord Bartholomy, has disappeared himself to go look for the lost tome. It's your quest to find it and him. Along the way, you'll fight monsters and gain prowess at wielding the powers of earth, air, fire, and water - nothing terrifically new here, but a fair enough premise.

The game runs into trouble with the rigid way it adheres to its goal. We watch Brian go from town to town, without straying too far from the (single) road. He doesn't because he can't, since the surrounding terrain usually only goes back about 20 feet. Mario 64's environments were much more adept in their utilization of 3D, not just as an immediate spatial reality - gee whiz I can walk around stuff instead of through it - but as a model for gameplay. Mario's levels were large open spaces that encouraged and rewarded exploration rather than connect-the-dots pathways with sporadic secret areas. Exploration is much more enticing in a game that really makes use of the potential of 3D. Unfortunately, we're still waiting for a true RPG application of this concept for the N64.

Quest 64's individual puzzles and challenges are similarly straightforward. Go to Town #1. Converse with townspeople. Discover that there's a villain (read: boss) scaring everyone and making it impossible to get through Forest #1 to Town #2. To boot, he's stolen Unique Elemental Magic Item #1 from Lord #1. "Brian, please go to the place, kill the guy, and bring back my thing." Once you've done it, what do you do? Return to Lord #1. Your reward? Unique Elemental Magic Item #1, which happens to be an Earth Talisman, with the implication of three more like it. While it's not entirely that simple, that's not too far off from the truth either, so be prepared for a lot of towns with ten rooms, five of which will be empty, and mazes about as labyrinthine as a bridge.

Quest 64 does look and sound pretty good. Not quite up to Mario standards, but the graphics are clean and fast and there's a fair share of nice texture mapping. The light sourcing in the forests and caves makes for some visually spooky moments. Unfortunately, the town scenes are plagued by wall clipping. And in combat, the trees are always getting in the way. Sure there's a Rotate View button, but in combat mode it returns to the default view when you let go, and you can't simultaneously rotate your view and perform another action. The only thing to be done is to peek, memorize, and take blind stabs at your foes. The game's music is varied throughout the game. It's of the cutesy music box variety for the most part, again raising demographic questions about the N64.

These days, we've come to demand fast-paced action from an RPG's combat system. Aside from some problems with view, Quest 64's turn-based combat control is terrific. It's smooth, simple, and easy to learn. The game makes great use of the C-buttons as the four elements, which correspond to four separate schools of magic, with ten-plus spells in each once you gain some experience, all available with a minimum of button pushing. Oddly, regardless of the size of the enemy party, it's only allowed one attack for each of your attacks. Thus five monsters only pose the tactical threat of one big one. For that matter, they're actually easier to kill, since the monsters attack in turns - regardless of proximity, range of attack, or power level, they just rotate through their roster. By keeping the weak ones alive until the end of a fight, you effectively cripple their offense.

A lot of people were hoping that Quest 64 was going to be the N64's answer to Final Fantasy VII, but it falls short of that lofty achievement. On close inspection, FFVII possesses similar linear game dynamics and rail-like motion control - there are large open spaces, sure, but many individual areas are just fancy-looking straightaways. So why is Square's giant seller so much better? For one, the cutscenes. Three disks' worth. Admit it, they're gorgeous, and they suck you right into the amazing plotline. Mystery, evil, betrayal, hope, and a certain morbid fascination - think of the two-plus million jaws that must've dropped worldwide when the falling platform destroyed the Midgar slum. Quest 64 is just way too familiar and straight-ahead. Plus, FFVII is replete with side plots and red herrings to distract you from your primary goal. In Quest 64 you just keep on truckin', for better or for worse. While part of this could be blamed on the restrictions of the cart format, Quest 64 manages to fall short in almost every possible way. 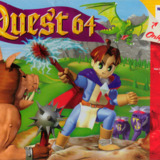