Aside from the game's exceptional QB challenge mode, there isn't much that really stands out in Quarterback Club 2002.

Acclaim's Quarterback Club 2002 for the PlayStation 2 is a good game with a few problems, but unfortunately for GameCube owners, the GameCube port of the game doesn't feature any improvements--in fact, it has a few more visual problems, with the worst being a slower frame rate. Aside from the visual problems, the game also suffers from weak artificial intelligence, which makes playing the single-player game for any real length of time pretty unexciting.

Playing in the game's season or exhibition mode gives you what you would expect from an NFL-licensed football game, including all 31 teams and stadiums and more than 1,500 players from the NFL. The game features a total of four modes of play: season, exhibition, playoffs, and pro bowl.

If you've ever played a football game before, you'll feel right at home with the control scheme of Quarterback Club 2002. The controls are generally responsive and accurate, though quarterbacking and passing the ball in general are way too easy, forcing you to crank the difficulty up for any kind of challenge. On the game's default difficulty setting, you can practically call any passing play, heave the ball into the air, and complete the pass. Since the game uses a standard icon passing control scheme, throwing a huge pass for 30-plus yards is as simple as pressing a button. Needless to say, the AI's pass protection is way too lenient, which is Quarterback Club 2002's biggest problem. Even when you put the game on the hardest difficulty setting, the pass protection is pretty weak, though it does get a bit harder to complete passes. But for anyone who's a hard-core football game fan, Quarterback Club 2002's AI will be a severe problem.

Though the game's primary mode is only average, the real shining point in QB Club 2002 is the game's quarterback challenge mode, which allows you to take your favorite NFL quarterback through a competition focusing on four different skill sets: speed and mobility, accuracy throw, read and recognition, and long-distance throw. Previous Quarterback Club games have featured the event before, but none have pegged it with the level of realism that QB Club 2002 does. The quarterbacks all stand around and motion to one another as though they're talking among themselves, and the announcers do a wonderful job of hyping the event. Once the event actually starts, controlling the quarterback can be a bit of a trial, since the controls during the event are rather sensitive. But once you get a feel for maneuvering and throwing, the mode is incredibly challenging and fun to play, due mostly to the level of control the quarterback challenge gives you over the actions of the quarterback. You can throw the ball exactly where you want, when you want, and the quarterbacks are fairly agile and quick on their feet. If the main part of the game would have incorporated the QB challenge control scheme or at least offered you the option to use it, Quarterback Club 2002 would have been much better.

In the graphics department, Quarterback Club 2002 for the GameCube looks fairly decent, although it doesn't look quite as polished as its PlayStation 2 counterpart due to a slightly slower frame rate. The game actually features smooth animation and a solid frame rate during the quarterback challenge mode, postplay close-ups, and replays--it simply gets knocked down a few notches during the games. The player models are decent, and the texture-mapped faces of key players really add to the realistic design of the game. The animations of the players aren't that impressive during the games, though, due to the slower frame rate and lack of transition animations.

In the audio department, the play-by-play and color commentary provided by Kevin Harlan and Bill Maas is lively and authentic. It's also rather repetitive, and after playing a couple of games with the same team, you'll hear some of the same quips being recycled.

Aside from the game's exceptional QB challenge mode, there isn't much that really stands out in Quarterback Club 2002. The presentation--from the front-end menu to the field--is solid, but once play begins, the slow frame rate detracts from the overall look of the game. The AI is a bit too predictable, and it's way too lenient on the pass protection, making the game less realistic. QB Club 2002 is by no means bad, but it's just not anywhere near the class of Madden 2002. However, the QB challenge mode and the generally solid controls make the game at least worth a rental, and possibly more for those who find Madden's simulation style unappealing, as it is the only other football game currently available for the GameCube. 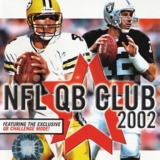