Quantum Redshift is by all means technically proficient, but it's uninspired and will probably give you the sensation that you've already done all this before.

After the official demise of the UK development house Psygnosis, the studio responsible for the genre-defining Wipeout, much of the team regrouped at SCEE's Studio Liverpool, which has kept the Wipeout series alive with Wipeout Fusion for the PlayStation 2. Other key members went on to form Curly Monsters and have produced their own futuristic racing game for the Xbox, Quantum Redshift. The collective experience of the team is quite apparent in the game, which is recognizably inspired by the Wipeout games. But you'll also get the impression that they've become so accustomed to making Wipeout games that they're unable to do anything else, as the game just doesn't bring anything particularly new or inventive to the table. Quantum Redshift is by all means technically proficient, but it's uninspired and will probably give you the sensation that you've already done all this before.

You should be able to pick up Quantum Redshift pretty quickly, because the controls are fairly forgiving and similar enough to those in other futuristic racers to keep the initial learning curve from being too steep. The ships have an appropriately floaty feel to them, without completely sacrificing responsiveness. The game gives you some offensive power on the track in the form of a simple three-part weapons system, which includes an unguided projectile attack, a homing missile attack, and a temporary energy shield. In order to use these, you'll have to pick up different-colored gems found throughout the track, and each gem will give you a single use of that particular power-up. You'll also have access to a reservoir of turbo boost you can tap at any time, which is replenished at the start of each lap. Scoring hits on your opponents, catching big air off jumps, and placing in a high position in the race will net you points that can then be used to upgrade the effectiveness of your shields, weapons, and turbo boost.

The track designs in Quantum Redshift tend to be very wide with lots of turf variety, including (but not limited to) rocky desert terrain, the icy slopes of a mountain, groomed dirt tracks, paved roads, and various bodies of water. And your ship's handling will change depending on the track surface. The tracks are also rife with shortcuts, rewarding you for racing smart rather than just fast. The inclusion of water on the tracks is a cool idea and is best used in one of the later tracks, where you'll actually start off several meters underwater and slowly rise to the surface as you move forward. Unfortunately, this little stretch is one of the only truly unique and interesting bits of track in the game. The others seem inspired more by conventional rally racing games like Rallisport Challenge than the gravity-defying luge-like tracks of a Wipeout game.

Quantum Redshift offers nothing out of the ordinary in terms of gameplay modes, either, which are made up of tournament, time attack, quick race, and multiplayer. The tournament mode is the most fleshed-out of the five and comprises five different leagues--novice, amateur, expert, master, and redshift. You'll start off the game with access to the first two tiers, and once you've completed the amateur series, you'll be rewarded with a new track, a new pilot, and access to the expert difficulty level. The length of the race and the fierceness of your adversaries increase with each level, becoming seriously difficult on the master level and requiring nothing short of perfection on the redshift level. The time attack mode pits you against your own lap times, with your best run represented by a ghost ship. The quick race mode lets you jump into a single race with any pilot on any course and difficulty level that you've unlocked in the tournament mode. The multiplayer mode is pretty cut-and-dried, letting four players compete in a standard single-race competition.

Taking a page from EA Sports Big's SSX Tricky, Quantum Redshift features a nemesis system, in which you can get on the bad side of certain other drivers, though unlike in SSX Tricky, the nemesis system here is static, with the bad blood between characters based on premeditated back stories rather than on your attitude on the racetrack. The system isn't especially deep, and it boils down to having a single opponent with an extra-special level of animosity toward you. It's an interesting idea that isn't executed very well, and its rigid nature and lack of subtlety keep it from having much impact on the actual gameplay.

The graphical presentation is the most outstanding feature in Quantum Redshift. Having spent almost two years developing the game, Curly Monsters obviously used much of that time learning to harness the power of the Xbox. The game lays on the eye candy pretty thick, with lots of lighting and particle effects on the weapons, motion blur when the turbo is used, and bump-mapping on much of the track surfaces. One of the most notable special effects is the spray of water against the "lens" of the camera, which will bead up and streak off to the sides in a very convincing manner. It's a pretty neat trick, and the developer obviously recognized this, because it's used liberally to the point that the novelty wears off sooner than it should. The ships themselves look good, with translucent canopies, some subtle reflection, and pontoons that move independently of the body of the craft, though the technical quality of the ship design is undercut by the fact that all of the ships share the same basic design. The game uses some highly detailed models to represent the actual pilots on the menu screens and during your face-to-face confrontations with other pilots, but their stilted animations and eerily vacant stares keep them from being especially impressive or convincing. These character designs aren't especially original either, and this is epitomized by Marcus Appleton, a British racer who bears such a striking resemblance to SSX Tricky's Moby, from the dreadlocks to the Union Jack jumpsuit, that it almost seems like bait for litigation from EA.

Dutch electronica maven Junkie XL is responsible for the music in Quantum Redshift, providing an adequate backdrop of thumping beats and howling synths, but the lack of stylistic variety will wear thin on anyone not smitten with his particular brand of techno. Thankfully, the game supports custom soundtracks, giving you the freedom to provide your own pulse-quickening tunes to race by. The rest of the game's sound design is old hat, though. Interestingly, the pilots and the announcers for the different tracks will speak in their native tongue, lending the game a certain international flavor, albeit one that doesn't make any sense in the context of a futuristic racing event.

While Quantum Redshift capably fills the vacuum of futuristic racing games for the Xbox, gamers already familiar with the Wipeout or Extreme-G games won't really find anything meaningfully different here. It's a pretty fun game on its own merits, so those who haven't grown tired of the Wipeout formula and want to see some flashy visuals should have a good time with what the game has to offer. 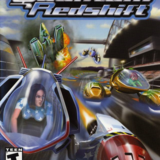