Actual science is full of the potential for fun, but mad science has it beat in this department, because it doesn't need to abide by the pesky, restrictive rules of reality. Quantum Conundrum's take on interdimensional travel may not hold up to scientific scrutiny, but who cares? This clever first-person puzzle game gives your noggin a satisfying workout. Unfortunately, it sometimes loses its focus in some frustrating sequences that require you to combine dimension-shifting with platforming, but the buzz your brain gets from solving its tricky puzzles makes it worth putting up with these problems.

You play as the 10-year-old nephew of Professor Fitz Quadwrangle, a scientist whose experiments with interdimensional rifts have gotten him trapped in the dimension where our lost socks, cell phones, and all the other things that mysteriously disappear on us end up. As the nameless kid, you must venture through the outrageously impractical Quadwrangle Manor, whose wings are crammed with dimensional experiments run amok. Professor Quadwrangle's stately voice is provided by actor John de Lancie, and though his dialogue is rarely laugh-out-loud funny, his smug yet jocular attitude makes him a pleasant presence throughout your journey. There's an appealing simplicity to the game's visuals, and the lighthearted sense of humor--the way paintings change to reflect whatever dimension you're currently in, for instance--keeps your predicament from ever feeling like a burden.

Not long after you arrive at the mansion, your uncle's disembodied voice directs you to acquire a glove called the IDS (or interdimensional shift) device. To progress through the manor on your impromptu rescue mission, you must make smart use of four alternate dimensions in addition to the "normal" dimension we all call home. You can be in only one dimension at a time, and the dimensions you have available to you depend on a number of factors, like which part of the manor you're in and which dimensional batteries have been placed in the nearest receptacle.

The first dimension you're introduced to is the fluffy dimension; here, objects around you become light enough to carry and to throw with ease. The applications of shifting into the fluffy realm are easy to grasp. If you need to place a heavy object on a weight-triggered switch, grab a safe in the fluffy dimension, set it down on the switch, and shift back to normal. If a pane of glass stands between you and where you need to go, pick up a fluffy couch, throw it at the window, and return it to normal as it flies through the air, giving it the necessary substance to shatter the glass and let you proceed.

There's not a great deal of complexity to the earliest puzzles in which you can only enter and exit this one alternate dimension, but additional dimensions are progressively worked into the mix. The second dimension is referred to as heavy, and here, even the lightest of objects becomes impossible to lift, and even normally flimsy cardboard boxes are invulnerable to the destructive power of the lasers that make many of the manor's chambers so hazardous to your health. You need to make clever use of these dimensions to navigate some dangerous areas, and the first few times you lift a fluffy safe onto a springboard, stand on it, make it heavy, and then make it fluffy again to launch yourself through the air are joyous.

The next dimension you gain the ability to enter and exit is the slow-motion dimension. Here, time slows to a crawl; lasers that normally shoot forth at imperceptible speeds can now be outrun, and you can give yourself ample time to leap onto that footstool you just threw over a chasm and ride it to safety, which feels like a spectacular feat. Slow motion is common enough in games, but this is slow even by slow-motion standards. You can toss an object from one room into another, slow down time, and then run into the next room and have seconds to spare before the object arrives. The numerous enjoyable applications of this dimension will have you wishing you could carry it with you out of the game and back into the real world.

In the final dimension you gain access to, gravity is reversed, and anything that isn't bolted down (except you) flies up toward the ceiling. With this ability, you can use safes as elevators and trigger switches on ceilings, among other things. Much of the time, Quantum Conundrum crafts clever puzzles around these four dimensions. Getting through a chamber is rarely a simple matter of using just one dimension; rather, you typically need to make use of the properties of two or three or four dimensions to arrive at the exit, and objects such as drinking birds (those toy birds that dip their heads periodically) are also sometimes essential to your success.

Though many of the puzzles may have you stumped for a bit, the solutions are always logical and fair, abiding by the observable properties of the dimensions you have available. As a result, the epiphanies that hit your brain like lightning strikes when the confounding suddenly becomes clear will have your inner mad scientist hopping with glee.

Alas, Quantum Conundrum isn't content with putting you in the role of interdimensional problem-solver. You must also be a platforming hero. Leaping onto a slow-motion safe as it soars through the air is easy enough, but you're called upon to perform some increasingly difficult feats in the later areas of the mansion--leaping between flying pieces of furniture while also deftly switching between dimensions to keep them sailing through the air without bringing them into contact with lasers, for instance. The first-person perspective makes it hard at times to judge just where you are in relation to objects around you, and the trickiness of successfully pulling off some of the necessary maneuvers may have you second-guessing yourself. Is what you're doing not working because it's not the right solution, or are you just not pulling it off correctly? Quantum Conundrum is at its best when it requires your brain, rather than your reflexes, to do the heavy lifting.

But the occasional frustration that results from these weaker moments isn't enough to derail Quantum Conundrum. The rewarding sense of experimentation and problem-solving that dominates this quest makes putting up with its foibles worthwhile, and the twisting, puzzling halls of Quadwrangle Manor are substantial enough to justify the 1200-point ($15) price of admission. It doesn't always play to its strengths, but the clever ideas and confounding brainteasers of Quantum Conundrum make it a mostly enjoyable journey into the fourth, fifth, sixth, and seventh dimensions. 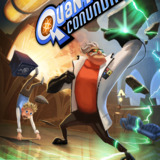 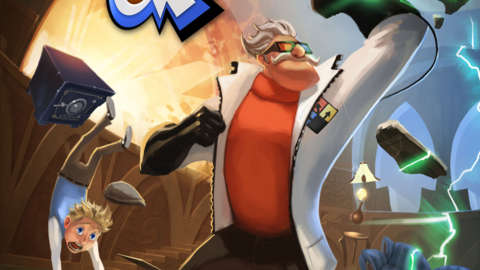 Quantum Conundrum is a quirky first-person puzzle platformer where players take on the role of a 12-year old nephew to the eccentric Professor Fitz Quadwrangle.