Quake III Revolution makes do with what it has to work with and manages to put on a pretty good show.

Porting a PC game that thrives because of its online focus onto a console with no online capabilities may seem like a pretty awful idea. Indeed, for owners of the PC game Quake III: Arena, Quake III Revolution for the PS2 will seem like a stripped down, pointless port, from the four-player limit to the inability to use the tools of the first-person shooter trade, a mouse and keyboard. But for those who don't have the means to play the PC game online, Quake III Revolution makes do with what it has to work with and manages to put on a pretty good show.

Aliens known as the Vadrigar are kidnapping the universe's greatest warriors and forcing them to compete against each other in a collection of arenas. While that was all you got in the PC version, the PS2 version attempts to expand on the thin storyline a little bit. Here, you'll actually hear taunts from your captors as you progress from tier to tier, and, in the end, you'll come face to face with a chatty, bulky alien in a fight for your freedom.

The PC version of Quake III had a progression of single-player levels that were meant to train you for online play. The fights were a series of free-for-all battles against a collection of CPU-controlled combatants. In order to add a little more to the single-player portion of the game, EA has added a campaign mode to the game. Here, you start out as a weakling and must fight your way up the ladder. As you move from tier to tier, your fighter will actually level up and become more powerful. To facilitate this, each of the characters in the game has a different set of initial and potential stats in categories such as speed, strength, and ammo capacity. Also, you'll play more than just deathmatch in the campaign. A few levels are devoted to elimination-style matches, where each participant has a set number of lives. Other types included timed matches, possession matches, and a weird variant of one-flag capture the flag that pits you against a team of bots. All these games can be played in the multiplayer mode along with standard team-based deathmatch and capture the flag, and you can also play one-weapon versions of the various modes. Playing in four-player split-screen mode works pretty well. The game still moves at a nice steady frame rate, and the only noticeable sacrifice is a reduction in item complexity, identical to simple items mode in the PC version.

The game has several different control configurations and sensitivity settings for the analog sticks, giving you lots of options. The advanced setup is one of the better settings, giving you what has essentially become the standard control configuration for PS2-based first-person shooters--the left stick moves, the right stick looks around, and the shoulder buttons are used for firing, jumping, ducking, and using the zoom feature. Weapon changes are handled by the controller's face buttons. The game mostly features levels taken from Quake III: Arena and its recently released add-on, Quake III: Team Arena. Some of the new items from Team Arena, such as the nailgun, chaingun, and proximity mine launcher, are also included.

The PS2 does a nice job of running the Quake III engine. From curved surfaces to colored lighting and fog, the levels are full of nice looking textures and excellent effects. Although the game runs at a very nice and smooth frame rate, putting lots of fighters in one room and firing a lot of projectile weapons can cause a pretty heavy drop in performance. The sound effects are all pretty good, even the newly redesigned sounds for the machine gun, shotgun, and lightning gun. The different character voices are fairly solid, though you may become annoyed with Orbb the eyeball's screeching noises--all the more reason to kill him quickly. But the real problem with the audio is the announcer, who says things like "five minutes remaining" or "impressive" when applicable. Id obviously tried to duplicate the sound and style of the announcer's menacing voice from the Mortal Kombat games. But instead of hiring an appropriate voice actor, Id simply took a typical voice (specifically, that of level designer Christian Antkow) and pitched it down a few octaves to make it sound sinister. Instead, it just comes off as amateurish. Given the frequency with which the announcer speaks during the game, you'd think that the voice would have received a bit more attention, especially since the same voice is used for the new boss character, who says lame and annoying things like, "Hurry up--I have a sequel to be in, you know."

Unlike the Dreamcast version and the PC original, both of which offer online play, the PS2 version of Quake III is suited to a very select group of people. If you can't play either of the online-capable versions of the game, then Quake III Revolution is a very solid game that compares favorably to both TimeSplitters and Unreal Tournament. However, even with the additions and tweaks made to the single-player game, anyone familiar with other versions of the game will find Quake III Revolution to be rather limited. 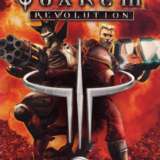 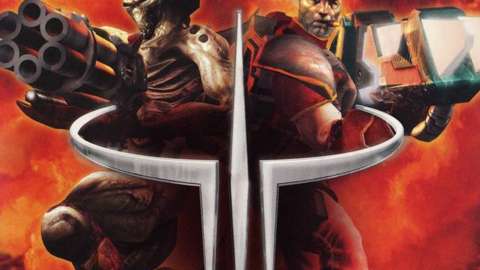 Quake III Revolution makes do with what it has to work with and manages to put on a pretty good show.