The world ends with a whimper in this shallow puzzle game.

The Book of Revelations may have foretold the end of the world, but it failed to mention that the Earth's ultimate destruction would come by way of benign-looking puzzle pieces. Puzzlegeddon brings to life the mythical fire and brimstone in a competitive puzzle game that urges players to forcibly attack their opponents by chaining together strings of high-scoring combos. It's a concept pulled straight from the popular Puzzle Quest, but Puzzlegeddon feels painfully shallow compared to its hugely successful forbearer. Whether you play against computer-controlled bots or able-minded humans, you're confined to a series of one-off matches. There is neither a story mode to play through nor character statistics to build and form through time. Thus, you are left with a serviceable though forgettable experience that is moderately fun in five-minute bursts but lacks any incentive to come back for another round.

Colored blocks must strictly adhere to their destiny. By coming into contact with their like-colored brothers, they disappear in a puff of smoke, banished from view forever. In Puzzlegeddon, you slide these blocks along a 6-by-6 square to form a match of five of the same color, and when you achieve that goal, you tap a button to make them vanish. By creating chains and combos, you also improve your score exponentially. The core mechanics work well. By allowing you to decide when you want to initiate a combo--instead of the game automatically making blocks disappear as soon as they touch--you can carefully build big combos that would simply not be possible in other games. However, sliding blocks quickly becomes dull because the game has so little variety. There are only four different colors to worry about, and there aren't any wild-card blocks or other tricks to throw a wrench in your combo making. It makes for a predictable experience that quickly becomes old.

The purpose of all this block chaining is to build up meters that allow you to strike down your opponents. Depending on what color blocks you dispose of, you put points into one of four different abilities: attack, disrupt, defense, and boost. Each of these abilities has three different levels, giving you access to more powerful maneuvers if you have enough patience to bide your time. For instance, the lowest attack level gives you just one weak missile to launch at an opponent; the second level splits that one missile into three deadly bombs; and the fully powered level lets you unleash one giant missile. One strange aspect is that you cannot choose which level attack you unleash. If you have your attack meter completely full, you have to send out your huge missile. Letting you decide if you want to drop the big one or three small missiles instead would have given the game more flexibility. This ultimately limits the strategic element, making it much easier to predict what your opponents will do.

Even against a group of up to 5 human foes (online only), matches lack the explosive appeal you might imagine accompanying a puzzle-themed take on Armageddon. Defense and attack are far more important than boost and disrupt, which means you have to make a concerted effort to match green and red colored blocks to keep those meters perpetually full. As long as you have your defensive meter maxed out, you make it extremely difficult to get attacked because you can repel any missile that comes your way. This powerful maneuver gives you immunity against even the most deadly missiles. Because it is so effective in waylaying any threat, the balance of matches is heavily slanted in favor of forming green chains, making an already predictable game even less exciting. After three or four matches, you'll have seen every combination of attack and defense possible, giving you little reason to go back for more end-of-the-world puzzle action.

Aside from the standard battle matches, there is only one other mode in which to compete. Poison Peril swaps out the brightly colored blocks for ones adorned with a skull, casket, and other gothic imagery. You no longer have opponents or colored meters to worry about either. Instead, you have a specific objective you must complete, such as forming a certain number of chains or disposing of every block with a bat on it. In this mode, you have to deal with evil blocks as well. If you form a chain with a poisoned block nearby, you damage yourself. You can only take so many hits before your game is finished, which creates a feeling of tension as you carefully weigh all your options. Poison Peril is more interesting than the standard matches, but it too has limited appeal. Your total score is based on how many levels you pass, but you must start at ground zero every time. There is no way to begin during the later stages, which is when things become more challenging, and the easy early levels aren't much fun to replay.

Puzzlegeddon is far too simple to hold the attention of puzzle aficionados for very long. With only four different colors to manage, the puzzle-sliding aspects are too easy and give players little challenge in their quest to form like-colored matches. The battle elements are way too predictable, limiting players strategies to such a strong extent that every match blends together with all your previous trials. Without any story mode to speak of or even a hint of persistent game mechanics, Puzzlegeddon is too shallow to make more than a mild splash on the puzzle landscape. 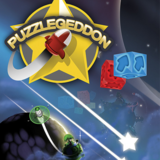 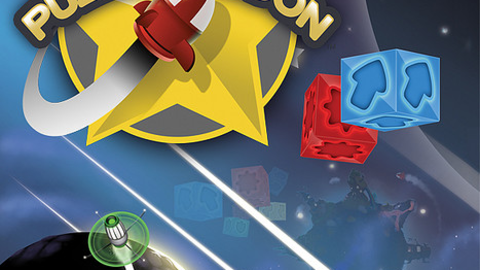 Select your island of choice and puzzle for resources to defend yourself and defeat opponents throughout the many galaxies, game modes, and challenges.