This sequel goes light on the role playing but still presents a compelling puzzle experience that's as enjoyable and addictive as the original.

Like peanut butter and chocolate or French fries and ice cream, Puzzle Quest: Challenge of the Warlord's seemingly odd mix of genres just worked. It resulted in a surprisingly deep and layered experience from both its role-playing and puzzling parts. Its sequel--Puzzle Quest 2--doesn't stray far from the core of the original but introduces several new additions to make it a more accessible experience. The outcome is mixed, with a more fun and varied puzzle side coexisting with a less engaging role-playing half. Puzzle Quest 2 is a less engrossing experience than its popular predecessor, but it's still an addictive and at times compelling game.

The stronger half of this sequel is its puzzle side, which once again sees you having to match jewels and items by sliding them around a rectangular 8-by-8 grid (ditching the hexagonal play field used in Puzzle Quest: Galactrix). When in battle, you'll need to match three or more skulls to do damage, or do the same with different-colored gems to earn the mana that fuels your various spells and special attacks. Matching four or more of the same type of gem grants you another turn, and this, coupled with the various spells you can launch to assist your efforts or impede your foes, adds a significant strategic layer to the gameplay. You'll constantly need to think a few moves ahead to ensure you don't leave your opponent in an advantageous position, as you'll also have to strategically target which gems to grab to make best use of your spells and abilities. The matches here can be just as exciting and involving as they were in the original; as a plus, your opponents this time around seem to have ditched the uncanny ability of earning continuous extra turns and going on damaging runs at will. This makes Puzzle Quest 2 feel a lot fairer than its predecessor and more dependent on skill rather than luck for success.

The puzzles here aren't exactly the same as in the original, however, with the biggest addition to battle in Puzzle Quest 2 being the ability to use weapons or shields. While the original allowed you to equip gear that conferred stat bonuses on your character, the sequel goes one step further by allowing you to actually use these items during a fight. You can equip up to two items at once, and, like spells, you'll need to collect a specific gem on the board before it can be used (in this case, gauntlet-shaped action jewel). You'll come across some pretty powerful weapons and shields in Puzzle Quest 2, making them a significant addition to your arsenal and an important part of most battles.

The addition of weapons makes matches faster paced thanks to their ability to deal large amounts of damage, but it's not the only way Puzzle Quest 2 improves on its standard puzzle mechanic. You'll come across seven different variations to the basic gem-matching game, and they're integrated seamlessly into your overall adventure. Coming across a locked door, for example, will trigger a lock-pick puzzle, which requires you to match specific items featured on the bottom of the board. Disarming traps needs a set number of matches made in each type of gem, while looting chests sees you having to join up key-shaped gems that only appear after you've matched other gem types. There's even a special boss-type puzzle, which gives you a special one-off weapon or ability that can only be used after meeting a pretty high gem requirement. The basic gem-matching mechanic may be the same, but these still make Puzzle Quest 2 a much more varied experience than the original, keeping the game involving for its lengthy single-player campaign long after the story starts to drag.

You can expect the game's narrative to drag to quickly, as you'll probably lose interest in Puzzle Quest 2's story quite early. While the first game's narrative was akin to more traditional role-playing games where the hero has to overcome a blight threatening an entire land, Puzzle Quest 2 is more akin to a dungeon crawler, with the vast majority of the action taking place within a towering castle and its tight corridors. You play as a lone adventurer trying to uncover the evil force plaguing the fortress city of Verloren, and it's a simple plot that's neither as involving nor as expansive as the first game's (completely unrelated) storyline. Similarly simplified are the game's RPG elements, which have been significantly ratcheted down from the original. While you'll still be able to choose a class for your character (barbarian, assassin, sorcerer, or templar), character attributes that you can upgrade as you move up in levels have been reduced from seven to five. Many of the original game's RPG elements have also been ditched, such as the ability to catch and train mounts, capture enemies to learn new spells, lay siege to cities, craft new items using found runes, and more. These omissions certainly make the game more accessible for those uninterested in the role-playing side of the Puzzle Quest series, but its depth and credentials as a full-fledged RPG suffer as a result.

It's not all omissions on the role-playing side, though, as Puzzle Quest 2 introduces a fairly robust loot system. Enemies and chests will drop weapons and armor, as well as materials. These include metals, wood, and more, which are used to upgrade any of your gear. There are dozens of items to earn, and with several upgrades available for each, it allows for plenty of customisation options.

Rounding off the changes from the first game is Puzzle Quest 2's visual style, which has been upgraded significantly. The game's world view has now switched to an isometric perspective, following your characters as they move around the town of Verloren and its nearby tower. Non-player characters and monsters are presented in good detail, but despite the prettier graphics on show, Puzzle Quest 2 is a rather bland game to look at because most of the game takes place indoors in similar-looking rooms and corridors. Faring much better are the puzzle grids themselves, with all of the different varieties popping out, thanks to the use of bright colors and uncluttered interfaces.

It's appropriate, then, that the best-looking part of Puzzle Quest 2 is also its strongest element--the gem-matching puzzles themselves. With a simplified approach to its role-playing half, the puzzles are left to carry the game, and they do so with aplomb. Puzzle Quest 2 is a fun experience that'll keep your attention for the 15 or so hours it'll take to complete the game (without tackling its many side quests), and despite its RPG-lite approach this time around, it's a game that's easy to recommend. 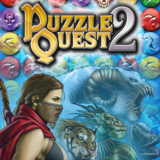 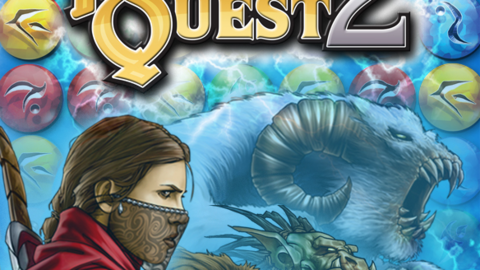