Let me elaborate on that statement a bit: I adore the mobile version of Puzzle & Dragons, and have made it a part of my daily gaming routine for a very long time. The prospect of a version devoid of free-to-play trappings such as limited stamina for adventuring, or the premium-monster Rare Egg Machine is naturally exciting. Developers often make substantial changes in game design when making a free-to-play version of a popular game, often to the game’s detriment; features once seen as a given are now treated as pricey premiums. On the 3DS, P&D Z and P&D Mario represent quite the opposite: they remove some of the features of the free-to-play game, leaving experiences that, while still quite fun, don’t quite live up to the ever-changing and growing mobile version.

Puzzle & Dragons, for the unfamiliar, is an exceptionally clever mix of match-three puzzling, a collectible card game, and role-playing. You assemble a team of five monsters, complete with a “leader,” from the horde of dragons, demons, gods, and superhumans you’ve collected, and then venture into dungeons consisting of sets of enemy encounters. You engage in combat on a 6X5 puzzle board: match three orbs of a particular color, and your monsters of that color attack foes. Unlike in a lot of similar games, you can move a single orb around the whole board for a short time, using it to shift many other orbs and create multiple matches, and thus yield more attacks and attack boosts for your team. Enemies, naturally, hit back when their turns arrive, which is when you focus on matching the healing orbs on the board. With practice, you’re launching multiple combos and healing each turn with ease.

It’s not just puzzle prowess that makes P&D appealing, however: every monster type in the game is unique, with its own statistics, color attributes, and perhaps most importantly, special skills. Leader monsters can employ a passive, always-on leader skill, like increasing the health points of your monsters of the same color, or giving an attack multiplier after a certain number of combos. Active skills are single-use abilities each monster has that you must choose to trigger, with effects like changing one orb type into another, or healing a bit of team health. Awakened skills--seen here only with Mario P&D--are extra, passive skills that can be applied to certain monsters by special means. Weighing considerations like monster types, stats, and skills is crucial to success when building teams. With the right materials earned from dungeon romps, monsters can also evolve and transform. It’s this feeling of building and growing a killer squad, along with flaunting your puzzle skills, that makes P&D so tremendously fun and satisfying.

While both Puzzle & Dragons Z and Puzzle & Dragons Mario are built on this formula, the two games take very different approaches to presentation. P&D Mario is a full reskin with the Super Mario theme, replacing the fierce gods and towering dragons of mobile P&D with Mario, Luigi, Toad, and a bunch of familiar baddies. P&D Z is also quite different from the mobile game, but in its own way: while it features some of the familiar mobile P&D monsters, it’s a more kid-friendly, story-driven adventure in which you fight an evil organization that controls the legendary Skydragons and is trying to reshape the world. From a strictly cosmetic standpoint, P&D Z is considerably more appealing: P&D Mario reuses New Super Mario Bros. music and visual assets frequently. Evolving a tiny dragon baby into a huge, hulking god-lizard is leagues more appealing than changing a Blooper into “a Blooper, but now with a baby Blooper!”

But there are more than just cosmetic differences between the two. Let’s start with P&D Z: it’s a fairly old game, having first released in Japan in late 2013, and simplifies the mobile game as it existed at that time, with all single-color-attribute monsters and no awakened skills. It also implements a significant change to the active skill system; instead of monsters each waiting a set number of turns before their skills can be triggered, there’s a pool of skill points that can be utilized at any time by any monster, as long as you’ve got enough points to use a particular skill. P&D Mario feels a lot closer to modern mobile P&D, with things like multi-attribute monsters, skill-up boosts, and awakened skills, along with a more traditional turn-based active skill system.

The key difference between both of these games and mobile P&D, however, is the removal of anything associated with the in-app purchases that fuel the mobile version’s money machine. Mobile P&D employs a free-to-play standard stamina meter than limits your play time (unless you either wait or pay), but you won’t find that here. Your squad gains experience with dungeons in P&D Z and P&D Mario, unlike the mobile game, in which experience is strictly sacrifice-based. (This is an adjustment I really wish would be implemented in the mobile version.) Wiping out in a dungeon doesn’t mean you lose everything you’ve earned: whereas you need to continue (and possible pay) in the mobile game to keep the loot you’ve earned to that point, the drops you acquire in P&D Z and P&D Mario stick with you whether you decide to bail, or use your one-up stash to keep pressing on.

This all sounds pretty great so far, so why don’t these games click in the way the mobile version does? For starters, there’s the odd difficulty curve. I understand that these games must be sold to people who may not have played P&D on mobile before, but being an experienced orb-slinger, I was terribly bored during the first few worlds of each game, wiping out enemy teams with relative ease. There’s no option to skip all the tutorials and introductory dialogue, either, meaning that no matter which game you choose to play first, you’ll be hearing a lot of the same advice to get you started. It isn’t until about the halfway point in each game that things start to get considerably more challenging, and sometimes in weirdly unfair ways. For instance, you may encounter a no-healing-orbs dungeon at a point where you’re not likely to have team members who have a “change an orb type to healing” active skill.

Another major issue is the grind. In mobile P&D, you have sets of dungeons that are centered around earning materials needed to upgrade your monsters, and they rotate on a consistent schedule. If there’s something you know you need, you set time and stamina aside on a specific day of the week to do a few dungeon runs for the drops you require (which you’re very likely to get). Both P&D Z and P&D Mario lack these, meaning that items (chips in P&D Z; coins and medals in P&D Mario) to upgrade monsters all must be be earned from regular dungeon runs, many of which don’t have great drop rates. This leads to a lot of repetition, forcing you to run dungeons where you know a certain monster could appear, usually with disappointment as an end result. A “pay in-game currency for random items” option appears about halfway through both games, but getting what you want from those is even more of a crapshoot.

But perhaps the biggest issue, an unavoidable part of being a prepackaged product, is that the games are woefully static. There are no fun little surprises when you boot the game up, like daily giveaways, new monster and dungeon additions, and limited-time bonuses and areas like in the mobile game. While it’s easy to cynically see these mobile P&D features as a means to get more money from players as they spend it on extra stamina and Rare Egg Machine rolls, the fact of the matter is that they make the game more interesting and exciting from one day to the next. When you’re done with P&D Z and Mario, when you’ve cleared all the current levels and collected every last type of Paragoomba and Cheep-Cheep, that’s all there is to it. But perhaps that’s intentional--have no doubt that developer GungHo hopes some players move on to the ever-evolving mobile game when they feel they’ve seen everything these two games have to offer.

That’s what I mean when I say that this game wasn’t made for me. It’s a watered-down stepping stone, intended to introduce players to Puzzle & Dragons with a familiar face and none of those intimidating in-app purchases. It’s clear, however, that P&D’s design was built on a free-to-play base, and taking those elements out actually makes the game feel less substantial as a result. (Yes, much as we loathe to admit it, it’s exciting to spend some premium-currency magic stones for a random rare monster from time to time, just as it’s fun to open a pack of trading cards or a blind-boxed figure.) While you can still have a good deal of fun with this two-in-one package, the mobile game is the better option. P&D Z and P&D Mario make nice little appetizers, but ultimately, it’s up to you whether you want to feast on the main course afterwards. 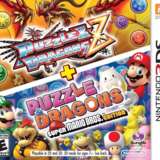 Heidi opened up a bunch of friend slots on her mobile Puzzle and Dragons account just for you fine folks who actually read the whole review (and to clear any doubts about her PAD prowess). Add 313,548,207 to your pals list for some great helpers. Dark and Red leads preferred! 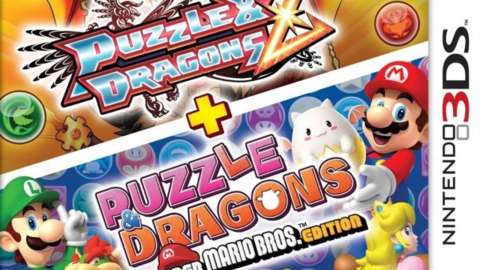