Video game mashups are nothing new, but Puyo Puyo Tetris is the most interesting one to come along in a while, bridging two puzzle series with distinct mechanics and rules. What you ultimately get are two great games and a surprisingly good mashup with numerous single- and multiplayer options at the ready. It's a robust package, and an excellent revival of two beloved yet stagnant series.

More players are likely to be familiar with Tetris than Puyo Puyo, but the two share a similar basic concept. Both revolve around objects falling from the top of the board that you attempt to arrange in a particular pattern. Creating a full horizontal line with Tetriminoes in Tetris will clear said line. In the case of Puyo Puyo, however, you're matching colored Puyo blobs--match four or more of the same Puyo types, and they explode off the screen. If your stack reaches the top of the screen in either game, you lose.

Puyo Puyo Tetris features a bizarre story mode with chatty anime-style characters and an absurd amount of dialogue--thankfully, you can easily skip these sequences. Story mode offers 10 acts, with 10 levels each that go back and forth between the two game styles before eventually merging them. While this is a lengthy way to see all the different elements Puyo Puyo Tetris has to offer, there are a wide array of game modes you can jump right into. Newcomers to either (or both) franchise can reference the Lesson mode in order to get up to speed as well.

The single- and multiplayer Arcade modes offer a surprising wealth of game variations. The multiplayer arcade includes a straight-up versus mode, along with four other options. Swap mode actually switches players between the two games during a match at certain intervals, while Fusion is a hybrid of the two, where both Puyos and Tetrominoes drop from the top of the board. Big Bang is a timed race to finish challenge boards before the other player, and Party mode features special items that drop (like exploding blocks) and either help or hurt players. Multiplayer supports up to four players locally and makes for a perfect couch-based party game.

Meanwhile, Solo Arcade lets you play any of the multiplayer game modes against AI, and it also adds a couple of more game types. Endurance is a 1-on-1 battle against the numerous AI characters to see how long you can survive, while Challenge mode is a series of different game types (with no AI opponent) that range from the traditional sprint and marathon modes, to events that change the size of the actual game pieces.

The variations on the standard game are a welcome diversion, but you may inevitably gravitate towards standard versus or endless games without the added novelties. The zen-like appeal of seeing how high a score you can earn byforming lines or destroying Puyos is still the biggest draw of these games. The hybrid mode is the most notable addition here, but it's heavy on chaotic gameplay. The board filling with both Tetriminoes and Puyos feels like overkill, veering too far from the simplistic nature of either game.

Online multiplayer is divided between Free Play and the ranked Puzzle League. Both allow for customization options regarding which game and how you want to play. During our online matches, the only available players were in Japan, and while we had some games drop, most were consistently stable. As with offline multiplayer, up to four players can battle it out online.

Puyo Puyo Tetris is an achievement in that it takes two distinct games and combines them in a way that doesn't feel forced or overly gimmicky. If you love just Tetris, this is an excellent Tetris game, and the same goes for fans of Puyo Puyo. It's also a perfect portable game, so it's ideal on the Switch.

Overflowing with colorful personality, Puyo Puyo Tetris revels in its weirdness. It provides solid versions of both puzzle games and merges the two in bizarre, frantic ways that adds a fresh dash of style to these long-running series. With an array of game variations spanning single-player, along with on- and offline multiplayer, it's an incredibly meaty package that should satisfy gamers for a long time to come. 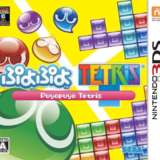 Jason D'Aprile spent 10 hours within the zany world of Puyos and Tetrominoes, and about a million playing Tetris over the last few decades. GameSpot was provided with a complimentary download code for the purpose of this review.