All-terrain vehicles are something of a niche interest, but you don't need to care about them in the least to enjoy Pure. All you need is an appreciation for breathtaking environments and intense racing action. In Pure, Black Rock Studio has crafted an accessible, wildly tricked-out game that may feel a bit familiar, but it pulls off its concept so well that you won't mind feeling like you've danced with this lady before.

In fact, Pure has more in common with EA's SSX series of snowboarding games than it does with your typical ATV racer. At the heart of Pure is a system that rewards you for pulling off spectacular tricks with the ability to boost. Performing tricks is simple--you just push a button and a direction on the thumbstick as you soar through the air--but the built-in risk-versus-reward aspect keeps things interesting. Pulling off longer, more complex trick combinations nets you more boost, and you can tweak your tricks with a shoulder button or simultaneously flip your ATV forward or backward to dramatically increase the payoff. But if you don't finish the trick before you touch ground again, you'll wipe out and lose boost, not to mention valuable seconds. And the game's presentation makes it all very visceral. Not only do the tricks look totally insane, but the way the ground flies up to meet you creates a real sense of danger. This makes successfully completing your trick milliseconds before you land exhilarating, while wiping out will have you wincing in vicarious pain as your rider goes tumbling across the rough terrain.

There are three event types on offer. Sprints are the most technical: These short races around small, tight tracks provide scant opportunity for pulling tricks. The focus on maintaining your speed and sticking to a smart racing line keep sprints fast-paced and fun. In freestyle events, tricks are all that matter. You keep going until your rapidly draining gas tank is spent, linking tricks to rack up multipliers and score big points. The tracks are decked out with ramps to provide more opportunities for catching big air, and power-ups are liberally scattered around that refill your gas tank, add a multiplier to your score, or instantly hook you up with the ability to perform a special trick. (More on those in a bit.) Freestyle events are the weakest of the bunch because the trick system--while robust enough for the race modes--isn't as compelling when you remove it from that context and make it stand on its own.

Standard races are the most interesting events because they balance the finish-line focus of the sprints with the need to pull tricks and earn boost. And, you'll need to make some important decisions on the fly. As your boost meter builds up, you earn access to more complex trick types, which, in turn, earn you more boost, so there's constantly a trade-off at work. Boosting is often necessary to pull ahead of your opponents, but draining the boost bar costs you the ability to pull off the more advanced tricks. It creates a surprisingly complex dilemma. There's added incentive to max out your boost bar because doing so will give you access to a special trick. Special tricks are the most outrageous in the game, involving physically impossible (but nonetheless awesome) stunts, such as standing on the seat of an ATV and doing a backflip as it soars through the air. Pulling off one of these tricks will refill your entire boost bar, but they take several seconds to complete, so you'll need to catch some serious air. Landing one of these tricks at a critical point in a race can make all the difference, so it's fitting that they're neither easy to earn nor to perform.

Pure's main mode is the World Tour. Here, you'll start off competing on ATVs with relatively weak, D-class engines, and these early events can be a tad too easy, but the competition gradually heats up as you rise through the ranks. The later stages, which find you racing faster models against more aggressive opponents, are also consistently thrilling. You choose from one of six riders, but there's no functional difference among them. It's all about the ATVs, and as you complete events, you'll constantly unlock new parts for your ride, which you can put together, piece by piece, in the game's garage. Armchair grease monkeys will appreciate the number of customization options Pure offers, while others might find it almost silly--many of the parts have no effect on performance, and your opponents aren't going to take the time to admire your taste in radiator scoops or handle-bar guards. Still, too many customization options certainly beats too few, and the game's autobuild option, which lets you toss together a ride optimized for race or freestyle events just by holding down a button, means you can avoid the business of ATV construction altogether if you'd like to get right to racing.

Aside from the World Tour, you can hop into any single event, though you'll need to unlock tracks in World Tour before you can access them. And the online play, which supports up to 16 players in an event, is outstanding. Even in races with 16 people on the track, the action stays fast and smooth. Again, though, you'll need to unlock performance parts for your ATVs in the World Tour mode to access them in online ATVs, which makes jumping right into online games a recipe for defeat.

Despite taking loads of inspiration from the SSX games, Pure capitalizes on the fact that it is, in fact, an ATV game. Although the action here is far from realistic, the physics feel convincing--your ride will dig into the terrain as you slide through curves, and the dirt roads that make up many of the tracks feel as rough under your wheels as they look. The tracks offer an excellent amount of variety, both visually and structurally--the hairpin turns through the airplane graveyard at Ocotillo Wells in California provide a sharp contrast to the gentle curves that take you through the lush coastal landscape of Kosa Phi Island in Thailand. And the tracks have alternate routes you'll discover that can shave seconds off your time, which makes familiarizing yourself with them rewarding. Still, the action isn't without its rough edges. It's not always clear where the track ends, so you may find yourself going out of bounds and being penalized a few seconds of time when you thought you were just taking a shortcut.

Pure's visuals are nothing short of breathtaking. Every detail, large and small, contributes to bringing the environments to life, from the grass and flowers right underneath your wheels to the roaring rivers you might see frighteningly far below. Your ride also realistically kicks up dirt, splashes through puddles, and leaves tracks in its wake. (Nearly every level has helicopters hovering overhead, and, of course, helicopters make anything more epic.) And the game creates a thrilling sense of speed, without any noticeable drops in the frame rate, even when the screen is filled with other riders. The game's sound is great as well. The raucous rock songs on the soundtrack by such artists as Jeff Beck, Wolfmother, and The Futureheads seem to have been chosen with care to create a cohesive backdrop for the action. The whine of the ATVs is authentic, and there's a sickening sinking sound that makes the game's insane jumps that much more likely to induce vertigo. The only problem with the game's sound is that the narrator tends to repeat basic tips ad nauseam, but thankfully, you can shut him up at any time.

The PlayStation 3 and Xbox 360 versions are almost indistinguishable from one another. The 360 version has achievements, while the PS3 version lacks trophies; on the other hand, the larger shoulder buttons on the Dual Shock make it ever-so-slightly more comfortable for tweaking tricks. Ultimately, if you know more people playing one version or other online, that's the one you should choose. Pure isn't the most original game out there, and it might have been nice to see it build on the trick system in SSX instead of just copying it wholesale. But nonetheless, its focus on tricks, boosting, and larger-than-life jumps over gorgeous environments pays off. This is an exciting racing game that seriously delivers on its promise of high-speed, high-adrenaline action. 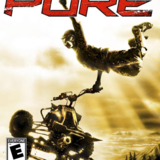