At no point during the game do you feel compelled to play.

When Psygnosis originally announced Psybadek, eyes lit up everywhere. Visions of Wipeout XL combined with futuristic "hoverboard racing" caused many an eye to water with tears of joy. The final product, however, leaves a lot to be desired.

Oddly enough, Psybadek is a racing game with a mission. You initially choose from one of two hoverboard riders who must defeat each course with the goal of rescuing his or her friends. Structured kind of like Crash Bandicoot, Psybadek is set over the course of multiple worlds, each with a different theme (fire, ice, etc.). You choose which world you want to tackle first and then must proceed to defeat its multiple sections. Each course is covered with gems that you need to gather, all the while avoiding or squashing killer-penguins.

Although, thematically, the premise is just as functional as any other, once you start playing is when it all falls apart. Once on the course, you'll find that each level "feels" the same, no matter what the theme of the track. Maybe it's because you're riding a hoverboard, but you would think that, perhaps, the ice track would be a little more slippery than when you're riding through the volcanic track. Unfortunately this is not the case. Furthermore, the whole control feels way too loose. If you're using the Dual Shock pad, it sure moves smoothly, but it feels so insubstantial that the experience becomes negligible. Your character can duck and jump, although the jumping is really feeble. Considering the relative simplicity of the controls, you would think the character animation would be better, but alas, it is not. As a bonus, there are minigames to access at the end of each level (such as the Penguin Shooter) that serve to break up the monotony.

Graphically, the game is fairly nice to look at. Perhaps on a par with Gex: Enter the Gecko, Psybadek is full of nicely modeled (if not designed) courses that make good use of Gouraud shading and light sourcing. Unfortunately, the draw-in can be fairly bad and is persistent enough to be a distraction at times. Again, the course designs are really nothing more than tedious slalom runs that offer little in the way of challenge.

The only really good thing that Psybadek has going for it is its soundtrack. While the sound effects are spare and not quite impressive, the soundtrack is easily one of the best in video games anywhere. Funky drum-n-bass surf music-style tracks are the modus operandi here, and it works out great. It adds a vitality to what is an otherwise pedestrian experience. It's a shame that the game doesn't do the arrangements justice.

After a short while of playing, it becomes clear that this game is clearly skewed towards a younger audience, possibly the same kids who would find Rascal appealing. Despite the Gen-X feel of the advertisements, Psybadek is a game that older, more experienced gamers would want to avoid. At no point during the game do you feel compelled to play, and quite honestly, isn't that the point? 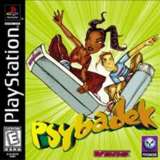 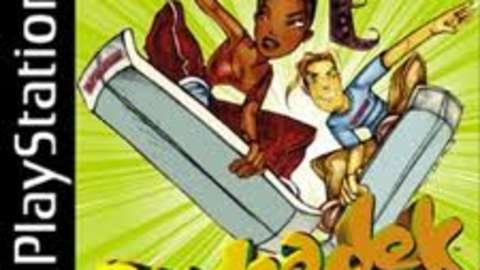 At no point during the game do you feel compelled to play.