Psi-Ops sets itself apart incredibly well with its series of well-implemented psychic abilities.

Sometimes great gameplay mechanics or a simple but effective twist on an existing formula is enough to turn what would otherwise be a run-of-the-mill experience into a fresh-feeling, well-conceived game. Take Midway's latest release, Psi-Ops: The Mindgate Conspiracy. For the most part, the game is your average military-themed third-person action adventure, complete with locked doors, navigation puzzles, and pattern-based boss battles against a variety of colorful foes. But Psi-Ops sets itself apart incredibly well with its series of well-implemented psychic abilities.

Psi-Ops sets you up as secret psi-agent Nick Scryer. Nick's a pretty powerful guy, but in order to infiltrate a growing psychic terrorist organization known as the Movement, he'll have to undergo facial reconstruction and have his memory wiped. Once this has been done, Nick's just an average guy like anyone else. But after his unit gets captured by the Movement, he runs into a double agent named Sarah, who shoots Nick up with a substance that will allow him to regain his psychic abilities and, over time, his memory. This provides a good storyline reason for beginning the game with no psychic abilities and for why they'll unlock as you proceed through the game.

Since Nick starts the game with only guns and simple melee attacks, stealth is a bit more useful at the outset. A well-placed melee attack on an unsuspecting foe will eliminate him in one hit. But you'll quickly regain your first and most useful power, telekinesis. The ability to lift up objects and fling them around with your mind is one you'll keep coming back to, partially because the game has been designed to make constant use of this power and partially because it's so much fun. You'll be able to lift up boxes and other objects and climb on them to get over certain obstacles. You'll also be able to stand on an object and levitate it in order to reach otherwise unreachable areas. But the most exciting use for telekinesis is as a weapon. If you're using the right analog stick to move an object, when you release the telekinesis button, you'll put some force into it and launch the object in that direction. This means you can pick up boxes, benches, or other ordinary items and clobber enemies with them, and it also means you can pick up enemies and fling them into exploding barrels, which is always fun. You can even pick up one enemy and toss him into another one, knocking them both down and giving yourself time to run up and gun them down. And perhaps most satisfying, you can pick up an enemy with your mind and then use your gun to finish him off while you're simply holding him up in the air. The movement of people and objects when using telekinesis is very fluid and believable thanks to a first-rate physics engine.

While telekinesis might be the most versatile power, the other powers in the game are also quite useful. Remote viewing lets you go out of your body, which is helpful for scoping out rooms without actually entering them. You'll also have to solve a puzzle by going into a locked room and viewing a security code. Mind drain lets you suck psi energy out of enemies' brains. You'll get more energy for sneaking up on a live foe than you will for sucking energy out of a dead one, but there are usually enough enemies around to ensure that you've always got enough psi power to finish your current task. Mind control lets you take over the bodies of enemy soldiers, which is handy for certain puzzles, though it also lets you get a view of the surrounding area without exposing yourself to danger or lets you take on enemy soldiers with one of their own. Aura view lets you see hidden objects and creatures that you can't see normally. And pyrokinesis puts the power of fire at your fingertips, letting you set enemies and objects ablaze at the touch of a button. As you might expect, this power combines with telekinesis quite well, letting you set boxes on fire and then launch them at enemies to, in turn, set them on fire.

Though telekinesis is the star of the show, all of the powers have their place. The array of abilities gives you a lot of different options when it comes to tackling a situation. When you're facing a team of snipers in a guard tower, for instance, do you want to use telekinesis to launch all of them out of the tower, making them all fall to their deaths? Or would you rather use mind control to get a bird's-eye view of the action, as well as a chance to take out a couple of soldiers with their own man? These sorts of choices are great because both options are perfectly viable and fun in their own way.

The artificial intelligence used to power the enemy soldiers' movements is decent, but Nick is so overpowered that taking on one or two enemies is laughably simple on three of the game's four difficulty settings. The real challenge is that the game tosses lots of soldiers at you at once. If you're spotted in some of the game's more open areas, you'll have to deal with a handful of soldiers rushing you, tossing grenades in your general direction, and distant snipers occasionally taking can't-miss shots at you. This means you'll have to make good use of cover and use the game's psi abilities to even the odds. The game's boss fights are mostly pattern-based, so you'll spend a little time figuring out the weak spots in the pattern and then deducing where and when to strike. The characters you fight against tend to be lively, and each one conveys his or her personality by speaking a lot during the fight.

Psi-Ops has a decent amount of speech in it, both in its cutscenes and from the average soldiers as you crush them by the dozen. Most of the voice work is pretty good, especially from the principal characters, though you'll still hear a clunker of a line here and there. The music is ambient in nature during levels, though it will swell during heavy action and fade back again as things slow down. The game also has pretty good sound effects that properly convey the loud cracks of gunfire and things like that.

Graphically, Psi-Ops has a great look to it. The characters are lifelike, for the most part, but their features and expressions have been lightly exaggerated to prevent them from simply looking like lifeless zombies. The game's environments are large and varied, and effects for things like fire look pretty great, as well. The game's physics engine helps make your interactions with the environment look more lifelike, which is a nice touch. Psi-Ops is available on both the PlayStation 2 and the Xbox. As you'd probably expect, the Xbox version does look better than its PS2 counterpart. The game is generally sharper and cleaner on the Xbox, but the PS2 version is no slouch when compared to other PS2 games. Additionally, as you play the game and unlock more and more powers, you'll be using practically every button on either controller. To that end, the PlayStation 2 controller feels better suited to handling the game's powers and abilities than the Xbox version is, but over time, this really isn't much of an issue.

Psi-Ops: The Mindgate Conspiracy is a great game overall. While it may look like just another third-person shooter with military overtones, the psi abilities are implemented so well that it's even worth taking a second crack at the game once you've completed it, just to be able to keep using telekinesis to slam foes around. It also tells a good enough story and will last the average player anywhere from 12 to 15 hours the first time through. So if you're on the hunt for a new action game, Psi-Ops would fit the bill very well. 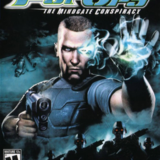 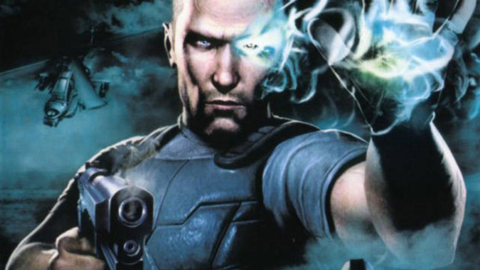 Psi-Ops sets itself apart incredibly well with its series of well-implemented psychic abilities.