All good things must end.

He's the archaeologist that has seen it all, traversed lands far and wide, and not only solved the mystery of Pandora's box, but traveled through time to uncover secrets of a forgotten past. Now, Professor Layton and his favorite young apprentice, Luke, are back for the final game in the prequel story arc, joining forces with former assistant Emmy Altava to delve deeper into the unsolved mysteries of a certain Descole. And what a fun, if familiar, adventure it is too, finally bringing to light many of Descole's motivations and linking together major elements of the films and games--from the Nautilus Chamber and the city of Ambrosia to the huge encompassing mystery surrounding the ancient Azran people.

Things get off to a strong start, with an action-packed narrative served alongside a large helping of anime cutscenes and an elegant orchestral score. Layton and his troupe discover a mysterious girl frozen in ice, and the story takes an eventful turn when she is subsequently kidnapped. Rather than the usual puzzle-solving picnic, the game kicks off with a dizzying and fun-filled session of quick-fire puzzles akin to picking the odd one out in a tense rescue mission. It's a welcome contrast from the usual mind-bending brainteasers that the Professor Layton series is so famous for, and a great way to get straight into the action.

Unfortunately, Azran Legacy's prologue is where the storyline peaks. As soon as it hits its midway point, and--surprisingly--when answers to long-standing questions are finally revealed, the narrative begins to drag something terrible. There's still plenty to do, and much to explore, but while each setting is packed full of its own characters and side stories, none are captivating enough to feel as though they are important to the overall story. They feel like filler more than anything else, and distract too much from the main adventure instead of building toward what should have been the ultimate climax in the plot.

The plodding plot can make getting the answers you've been searching for far more of a chore than it should be.

That said, while the plot is lacking, Professor Layton is, first and foremost, a puzzle game, and the puzzles are much more of a success. There are around 150 conundrums to tackle, many of which are more than tricky enough to challenge even the most hardened of puzzle aficionados. Unfortunately, the puzzle types have been unchanged from previous games. There's little diversity, with a chain of similar math problems, riddles, sliding brain-teasers, and rotating puzzles being repeated throughout the game. They're still lots of fun, but it would have been nice to see something a little different from the usual Layton fare.

Fortunately, the three types of minigames that are unlocked as you advance through the story are appealing and imaginative, and provide countless hours of additional challenges for those seeking that little something extra. In Dress Up, you take on the role of fashion consultant to an assortment of distinctive and lively characters, creating the perfect little number to match each character's style requirement from items discovered throughout the journey. Nut Roller, the most enjoyable of the bunch, involves taking control of a squirrel that needs to maneuver its precious walnut through an obstacle course to reach its goal. Even better is this minigame's ability to feel like a separate additional game entirely, with the difficulty of each level becoming increasingly more challenging as you advance.

The final minigame is Blooms and Shrooms. The objective is to tend to a flower garden, planting unusual flora that produces energy for trees in order for them to thrive and bloom. This involves placing flowers on a grid, each of them giving off energy in a variety of patterns either horizontally or vertically across the board. The trick is figuring out which arrangement will yield the most energy to grow your trees, all while trying to avoid growing poisonous mushrooms, which give off toxic gases. Blooms and Shrooms is tricky to master, and but if you've got the mental chops for it, it's pretty fun.

Azran Legacy also adds a whole new mode that makes great use of StreetPass. Treasure Hunt mode lets you challenge other players to find a variety of items within their game as they play through. Succeeding unlocks 3D models and dream sequences of characters from within the Professor Layton series, and the usual single-player mode offers rewards in exchange for points amassed from completing challenges.

Aside from the minigames, though, there's nothing special to make Azran Legacy stand out from its predecessors. And even if you're heavily invested in the story, the plodding plot can make getting the answers you've been searching for far more of a chore than it should be. Despite those issues, there's a certain charm about Layton and his chums that keeps you absorbed. The puzzles--if overly familiar--are still well designed, and with an additional year's worth of daily puzzles to download on top of the 150 already in the game, there's plenty to keep you occupied. If you're someone who has steered clear of Layton previously, Azran Legacy isn't going to convert you. This is a series that sticks to what it knows: challenging puzzles alongside a thoroughly charming adventure. 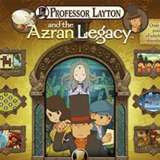 Lucy Ingram is an aficionado of puzzling adventure games and loves a bit of a challenge. She has followed the Professor Layton series from the onset of The Curious Village and is always eager for the next opportunity to stimulate her mind.