In the Disgaea series, Prinnies are nothing more than cannon fodder. Being used as grenades more often than fighters is an awful fate, so it was easy to take in their cheerful disposition and feel sorry for their lot in life. But after playing a few levels in their second chance in a lead role, you might take abject pleasure in punishing these combustible birds in whatever way possible. Prinny 2: Dawn of Operation Panties, Dood is structurally identical to its predecessor. As in Prinny: Can I Really Be the Hero, you traverse through side-scrolling levels hopping across platforms while fighting enemies until you reach the end boss. But the problems that erected a formidable barrier the first time around haven't been addressed in the slightest. You still have to wrestle with rigid controls the whole way through, and the frequent deaths are now so grossly unfair that it's unrelentingly aggravating. The careful balance between challenge and frustration has been upset, opening the door for bouts of head-pounding agony as you stubbornly force yourself through each stage. Tricky-but-rewarding boss fights provide adequate enticements, but there is too much misery in this demonic tale to make it worth playing for all but the most committed individuals.

Prinny 2 begins on a portentous note. Etna, underworld ruler of a helpless flock of Prinnies, has had her panties stolen. Her biggest fear is that the culprit will sniff them, somehow causing the whole world to end in the process. Now, Prinny is not exactly known for having the most highbrow humor, but there are certain lines of decency that shouldn't be crossed in polite company, and panty sniffing is definitely one of them. This isn't an offensive story by any stretch, but its crass setup only leads to juvenile jokes that are more likely to make you cringe than smile. There's nothing clever in the locker-room banter that pervades this adventure, so instead of having goofy yuks to look forward to at the end of each level, you only have headache-inducing eye rolling that should go along nicely with the blisters forming on your aching thumbs. This is obviously not a game for those who are easily offended nor is it funny enough to amuse those who enjoy raunchy humor.

The weak setup is the first of many problems in this troubled sequel. The combat and structure have been carried over virtually unchanged from the prinnies' original outing. The 2D levels are overflowing with precarious platforms, merciless enemies, and a healthy number of checkpoints to ensure you don't go crazy with rage. Your move list is small, but there is a bit more depth than in the previous game. Your main attack is still a sword that you can spam either while standing on the ground in a direct strike or as a longer-range, diagonal throw while in the air. There is also a butt-stomp that can stun enemies and trigger switches. What's different is how the combo system is utilized because it has major gameplay ramifications. When you hit enemies and eat desserts, a bar at the bottom of the screen begins to fill, and when it reaches its tipping point, you can unleash an impressive move. It's nice having a few powerful attacks in your bag of tricks, but this also makes boss fights slightly easier. Connecting with one of these bad boys does too much damage to bosses, making these otherwise exciting battles a little too easy.

A lack of balance is a theme throughout Prinny 2. Level design has always veered on the punishing side because this is a game in which you are meant to die--and die often. You start with 1,000 lives and run through that reserve rather quickly. But what was once a tough-but-fair experience has now become almost sadistic in its attempt to squash your progress at every opportunity. The problems begin with the controls. They are unchanged from the first entry, but poor level design exasperates the issues that were already present. Although you have a double jump, you cannot control your movement when airborne. This restriction has appeared in other games, but thoughtless level design has made this limitation feel extremely cheap in Prinny 2. Enemies randomly rush at you from offscreen all the time, and it's impossible to avoid them if they appear while you're trying to jump to higher ground. You often have to cross your fingers and hope nothing is waiting for you out of sight because it's not always possible to shift the screen slightly to look ahead in the heat of battle. And even when you can shift the screen, it doesn't scroll far enough to take in all potential threats.

The ground pound is also quite finicky. There's a noticeable delay between when you hit the button and when you begin the move, and the difference between striking your target and falling into a bottomless pit occurs in that beat. And don't think foresight will solve this issue, either. Enemies turn and juke on their own accord, and some vanish entirely, which leads to lots of deaths that aren't your fault. Oh, and if you miss and hit the ground, you have to deal with a brutal delay before you can move again. This control issue was present in the first game as well, but grueling level design and enemy placement makes it so much more aggravating the second time around. Your sluggish movement also crops up when you climb ledges. It makes sense that a penguin would need a second to hoist itself up on a cliff, but the game isn't designed around this idea. Enemies stand at the top waiting to attack you, and oftentimes, you are stuck in a no-win situation where the only way to advance is by climbing, but you're repeatedly knocked back whenever you grab onto a ledge.

And that's really the biggest problem with this game. Other games have similar control limitations, but it's possible to avoid the feeling of frustration by crafting levels with these restrictions in mind. Prinny 2, however, seems to relish punishing players. During one stretch, you need to leap between platforms high in the air until you reach safe ground way above you. The platforms are small and break apart with a few hits, and there are enemies flying all around you. Attempting to butt-stomp the enemies is more likely to result in falling to your death than anything good, but trying to hit them with your sword is just as dangerous because you destroy the platform on which you're standing. The best strategy is to move as quickly as possible, but you just have to hope for the best because enemies keep flying in from offscreen in no discernible pattern. In moments like this, Prinny 2 ceases to be a test of your gaming skills. Instead, you have to rely on memorization and luck to succeed. There is no feeling of satisfaction when you finally come out on top because you can do the identical thing a dozen straight times and only pass it once. In Prinny 2, it's often better to be lucky than good.

These aggravating moments overshadow the fun that is at this game's core. During the brief stretches where the level design and enemy placement come together to form something that is difficult but not cheap, Prinny 2 is just as exciting as the original. Butt-stomping enemies and then finishing them off while you're still airborne makes you feel like the all-powerful penguin you strive to be, and tossing in a few of your new supermoves makes it particularly satisfying to finish off those pests that dare to stand in your path. In one section, you have to fight off a gaggle of succubi swarming overhead while you try to open doors that are barred with a magical force field. This part is difficult because the succubi toss bombs and unleash bats, and there's a radio-controlled car on the ground that will run you down if you aren't careful. But it works because you can see the enemies at all times and there is plenty of room on all sides to ensure you can move without anything blocking your way. Stunning them all and then unleashing a deadly penguin slide is so satisfying that it's hard to contain your joy, but it just showcases the unbalanced nature of the rest of the game.

The highlight of the original Prinny was the fantastic boss fights, and they return with a vengeance in this second outing. These battles are as old school as you can get, but that doesn't make them any less fun. Your enemies move in precise patterns, and you have to bop them on the head, rattle them with your sword while they're stunned, and repeat the process until they die. It may not sound like much, but every boss has a unique twist, and figuring out how to attack them without suffering from a retaliatory blow is a delectable dance that almost makes it worthwhile to suffer through the painful levels beforehand. As previously mentioned, the new combo moves make fighting some bosses easier than you would expect, but there are still a few who will knock down anyone who gets too cocky. As in the original, the majority of the bosses return in the second half of the game in a gauntlet that prepares you for your final foe, and it's not nearly as exciting to square off against these masters a second time. But these are still great battles that make you want to prove yourself just as in the original game.

Prinny 2 is a disappointment on many levels. As good as Prinny: Can I Really Be the Hero was, it had obvious weaknesses that should have been addressed in a sequel. Not only does Prinny's second effort fail to fix those problems, but it also adds new ones that sap away most of the joy present in the first game. There are still good moments strewn throughout this grueling adventure, but it simply isn't worth the agony to reach them. The inclusion of three difficulty settings doesn't hide any of the problems tied to the level design and enemy placement, either. No matter which mode you choose, you should still expect unseen enemies to knock you into pits without giving you any chance to move out of the way, and that is not fun at all. If the Prinny franchise wants to keep the flame of gaming's past burning with these punishing platformers, it has to find a balance between challenge and frustration. Difficulty only works if you feel in control of the outcome at all times, and that is simply not the case with this game. Penguins will never be action heroes if they don't have the tools to succeed. 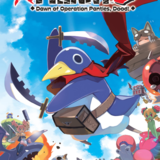 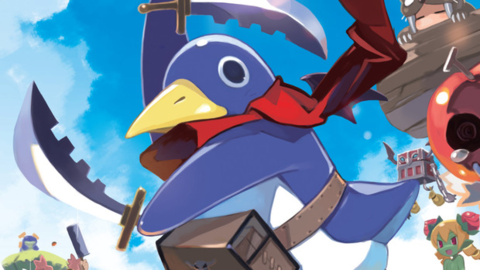 7.7
Sign In to rate Prinny 2: Dawn of Operation Panties, Dood!