While the fighting is fun, the game requires more brains than brawn.

It's tough to find a more consistent mobile games publisher than Gameloft, and right now it would be very tough indeed to find a better wireless action/adventure game than Prince of Persia: The Sands of Time. From controls to graphics, the game plays like it belongs on the top shelf in the GameBoy Advance section.

Like the previous Prince of Persias, The Sands of Time features a prince who has to climb, fence, and think his way out of a booby-trapped castle. The prince can find items that give him new techniques, like short-term flight and forward rolls. The controls are crisp, despite the game utilizing nearly every button for an action. And while the fighting is fun, the game requires more brains than brawn. Thankfully, there are in-game hints that can be turned off while you play.

The PoP graphics are cartoonish yet detailed, and the animation is among the best that cell phones have to offer. The difficulty meter is pegged just right-- always challenging but never frustrating. Extra details (like a code in the BREW version that unlocks a big-head version of the PC game) make Sands of Time a mobile masterpiece.

My only complaint is that, like most Gameloft titles, the game feels too short. However, hidden items and level rankings will probably encourage you to play through many times over. Another triumph for the Gameloft team. 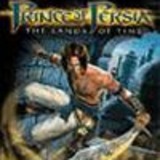