It has two tragic flaws, and these problems are so overwhelming that the good parts seem wasted.

If everything about Prince of Persia 3D were bad, it wouldn't be nearly as frustrating as it is. If the game were terrible or even mediocre, it would be easy to file away with all other such games that come out month after month. But there is much to like about Prince of Persia 3D, and certain aspects of it are especially excellent. Yet this third outing for Jordan Mechner's swashbuckling hero has two tragic flaws, and these problems are so overwhelming that the good parts seem wasted.

The previous two Prince of Persia games, the first from 1989 and its sequel The Shadow and the Flame from 1993, were both side-scrolling action games. In them, you controlled the prince as he climbed ledges, fought guards, and jumped over and crawled under traps, all in search of his beloved and imprisoned fiancée. Prince of Persia 3D follows this formula exactly, only this time the game is in 3D, and the prince and his princess are married. But once again, the prince has been imprisoned and left for dead, and he must escape the clutches of the villain and rescue his fair maiden.

That Prince of Persia 3D is essentially a three-dimensional version of its predecessors is no criticism. In fact, the trap-jumping, guard-fighting gameplay of the original translates nicely to 3D, and the best part of the game is how effectively it utilizes these elements. Only a handful of games have so successfully created the feeling that you are capable of such daring feats. During the course of the game, you'll find yourself swinging from ropes across wide chasms, leaping off high ledges to slide down rising drawbridges, and other exciting stunts.

The excellent level design in Prince of Persia 3D makes such stunts commonplace. The game is well paced; it has just enough enemies so combat doesn't get tedious, enough exciting moments to make you want to keep playing, and enough puzzles to keep things interesting in between. The levels also look quite stunning and are filled with big, exotic architecture and wondrous gadgets and machinery.

But while the levels themselves look great, the characters that populate them don't. That's not to say they look bad (except in the cutscenes, in which the disproportional bodies and strange faces of the characters can look downright ugly), but they don't look particularly special either. The motion-captured animation looks great, except when the prince runs up stairs or ramps, at which point he looks like an old man who just doesn't have it in him anymore. Then again, it's been ten years since he first took to adventuring, so perhaps we should give him a break.

The inconsistent visuals would be easier to ignore if the game didn't have more serious problems. The game's worst flaw is its sluggish and unresponsive control. Turning the prince while running feels like trying to steer an 18-wheeler. He turns wide, which makes running around corners a chore. And the game often won't respond to two commands at once, so that actions such as drawing your weapon or simply jumping while running are far more difficult than they should be.

The perspective is almost as problematic. The camera stays at a fixed point behind the prince, and only occasionally adjusts itself to clear objects and obstructions. You can control the camera Tomb Raider-style if you stand still and manipulate it manually. But that doesn't help when your back is against a wall and you're trying to make a difficult jump while the camera is showing you in close-up profile. Such situations are all too common in Prince of Persia 3D.

During combat, the camera angle is less of an issue because the perspective switches to a side view when your weapon is drawn, and while this feature is helpful, it too produces its share of annoyances. You can't turn while your weapon is drawn, which makes lining up with an enemy difficult. Thankfully, enemies will run up and get in position for a fight, but often you'll just start swinging wildly while they bash away at you. Then again, this problem goes both ways; your enemies will just as often not be able to hit you while you whack away at them with impunity.

Prince of Persia 3D would have been amazing had it been more refined in certain specific areas. The quality of the levels will more than likely make you want to keep playing despite its flaws, but these flaws will be a constant source of dismay for anyone who just wants to enjoy jumping and slashing around in the otherwise well designed world. 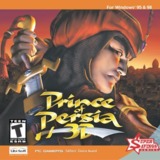