Expect to enjoy it immensely for the first week or two, but don't expect to find very much long-term fun.

Capcom's got more than a decade invested in the fighting-game business. Most of Capcom's fighters have followed in the footsteps of the Street Fighter games, keeping the same basic 2D gameplay. While the company has ventured into 3D in the past, nothing it's done has been even remotely like Power Stone.

Yes, Power Stone is technically a fighting game. But it's hard to compare it to your standard fighter. For starters, there's no block in the game. So all of the defensive maneuvers consist of staying out of the way of your opponent's attacks. This isn't nearly as hard as it sounds, given the game's 3D nature. Rather than pressing up to jump, you use the Dreamcast's analog pad to run around the arena in any direction. So you're free to run away from your opponent's larger attacks. The rest of the game's control is equally simple. You've got a jump button, a punch button, and a kick button. The rest of the buttons are used to execute combinations of the three main buttons, making throws and super moves easier to execute than in the three buttoned arcade version.

The aim of the game is the same as every other fighting game, but the methods you use are quite different. For example, there aren't really any special attacks. Your standard character won't be shooting fireballs or doing dragon punches. Instead, you must use the arena as a weapon. Each playfield is littered with crates, benches, signs, and other items that you can pick up and toss at your enemy. There are also various items that pop up, including hammers, swords, pistols, flamethrowers, Gatling guns, and rocket launchers. But the main items in the game are the three power stones.

At the beginning of a round, each fighter starts out with one power stone. The third stone eventually spawns at a random location in the arena. Getting all three stones shifts your fighter into overdrive, complete with a costume change. While powered up, each button press unleashes a super attack, usually resulting in a projectile. Each one of these attacks takes up a bit of your super meter. There are also super moves that do a significant amount of damage and usually look pretty flashy, as well. These supers use up the rest of your bar, turn you back into your regular self, and scatter all three of the gems around the arena. Given the explosive nature of the supers, it's in your best interest to get the gems and, obviously, keep your opponent from getting them. If your enemy possesses a stone, you can hit him a few times (or less, with stronger attacks or items) and cause him to drop the stone. So, most fights revolve solely around the stones and the jump kick (which automatically points you at your enemy and causes him to drop a stone if the kick connects) to keep your opponent from holding any stones for too long. A cheap tactic, yes, but also an effective one. Unfortunately, jump kicking at your opponent gets pretty old pretty quickly. The one-player game picks up some of the slack, as there are quite a few things that can be unlocked, including three characters, three VMU minigames, a different camera mode, and additional items that weren't in the arcade version of the game.The graphics in Power Stone are well done. The polygonal fighters are nice and smooth. The fighters are designed in a very cartoony style, and the stages are all incredibly nice. However, portions of the game (some of the more extravagant super moves, or when players are on fire, in particular) are plagued with slowdown, marring an otherwise explosive display. The game's sound effects and music are very good, but the announcer's voice, which you hear mainly when you are picking up or dropping a power stone, is stupidly annoying.

All in all, Power Stone is a very fun and unconventional fighter. It's easy enough for even non-fighting game fans to pick up the basics extremely quickly. However, the excitement is short lived. Expect to enjoy it immensely for the first week or two, but don't expect to find very much long-term fun. 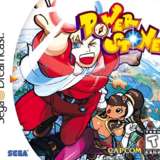