If you can find friends to play with, and can tolerate the long load times, there's some sturdy brawling to be had here.

Originally released in 1999 as an arcade game running on Sega's modular, then-standard-bearing Naomi hardware, Power Stone found itself a good home on the Sega Dreamcast, where it delivered an accessible style of explosive fighting action. Though it spawned a much-improved sequel, the franchise never made it off Sega's doomed console, until now. Power Stone Collection faithfully resurrects both of these underappreciated brawlers on the PSP. It's a bit of a warts-and-all package. The action has some teeth when played against live opponents, but the weakness of the single-player game is quite pronounced.

Power Stone Collection includes both games pretty much how they appeared on the Dreamcast. The game's arcade roots show in both the lightning-quick gameplay and the color-soaked visual style, and its look is pretty unique, applying an anime art style to some unusual sources. Many of the characters are ostensibly inspired by an eclectic variety of turn-of-the-century archetypes. There's Falcon, the dashing English biplane pilot; Wang Tang, the kung fu disciple; Ryoma, the top-knotted samurai; Rouge, the Arabian princess; and Galuda, the Native American. The inspiration for other fighters, like the hulking Gunrock or the creepy, mummified Jack, is less apparent, but the action quickly becomes so bizarre that it hardly matters.

At its core, Power Stone is a simple player-versus-player brawler--two players enter a room and beat the stuffing out of each other until only one's left standing. Everyone has the same basic abilities, including a few simple melee attacks, some grappling abilities, and the ability to pick up and throw environmental items. Weapons and power-ups will regularly materialize in the arena, like giant hammers, Gatling guns, bazookas, Molotov cocktails, swords, baseball bats, and more. Where the fight takes place can have a profound effect on the flow of the action, since arenas can vary quite a bit in size and shape, and each usually comes with a few specific environmental hazards.

But it's the actual power stones that make the game really interesting. Players start off with a single power stone in their possession, and successfully landing an attack on an enemy will knock it out of them. Collecting three power stones will trigger a transformation effect where your character undergoes a drastic costume change and is temporarily imbued with incredible powers. The effects of the power stones on different characters can vary wildly, and this is where their uniqueness really starts figuring into the gameplay. Falcon, for example, will turn into a missile-spewing robot. Wang Tang becomes a golden-haired warrior capable of launching massive energy attacks. Gunrock turns into a boulder monster. The fundamental gameplay in Power Stone is fast and fun, but it's the way players will ruthlessly fight to gain control of the power stones that makes it more than just a basic brawler.

Though Power Stone established the visual style and the pace of the gameplay, Power Stone 2 took the idea and ran with it. It increases the number of players from two to four, which has a huge effect on how manic and chaotic the action is. The cast expands to include even more bizarre characters, like Gourmand, the portly, mustachioed chef who can turn into a dinosaur. Weapons are crazier, and the levels are more involved, multipart ordeals. Rather than just beat the snot out of each other in a sealed room, in a Power Stone 2 level you might start off fighting on top of an airship for a while before it explodes, leaving you to freefall for a few thousand feet as you struggle with the other players to grab a life-preserving umbrella, before finally touching down on some kind of stone temple.

Power Stone and Power Stone 2 appear basically as they did on the Dreamcast in Power Stone Collection, though they've both been modified to include widescreen support (purists can choose the original 4x3 aspect ratio if they please). Both feature a story mode of sorts where you take a single player through a number of encounters, occasionally fighting some large, bizarre bosses. You can also play a single match against computer-controlled opponents in versus mode. There are also training modes to hone your skills in and a few odd unlockable bits like special items and a collection of simple Game & Watch-inspired minigames. The computer can definitely put up a decent fight, but really, Power Stone is a game best played against live opponents, and if you've got someone nearby that you can play with, the ad hoc multiplayer support can be incredibly fun. It would have been even better if Power Stone Collection included infrastructure support or if you could use game sharing for multiplayer purposes. Unfortunately, there's no Internet play, and game sharing can only be used to send someone a single-player demo.

The relative age of the games means that neither really pushes the limits of the PSP hardware, but they still look sharp, with a sense of style that's definitely fun and energetic. But, there are some low-res textures that stand out, the characters look a little boxy, and there are other little artifacts, like the pronounced circular shadows cast by characters, which denote the age of the source material. The sound design has aged a bit better, though it still sounds like an arcade game with a forceful and lively synthesized score and some good fight sounds that fit the cheery, cartoonish tone of the visuals. Despite the relatively simple presentation, Power Stone Collection is unfortunately saddled with some lengthy load times. They don't really interfere with the gameplay experience once you get in a fight, but all the waiting around between matches can definitely test your patience.

Power Stone Collection is sure to please fans that have since had to stow their Dreamcasts, as well as anyone just looking for some quick brawling fun. It's too bad that Internet play wasn't included, a feature that would make the game far more replayable, but even without it, the crazy, fast-paced gameplay still stands up. 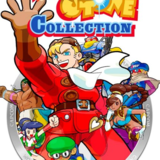