Port Royale 2 might focus more on building shipping cartels than sea battles and swordplay, but its brilliantly realized design is more than just number crunching.

All the attention being paid toward the imminent release of the remake of Sid Meier's classic Pirates! is doing a disservice to another game set on the rolling waters of the Caribbean. Ascaron Entertainment's Port Royale 2 might focus more on shipping cartels than on sea battles and swordplay, but its brilliantly realized gameplay is more than just number crunching. Buccaneers, tropical locales, and piracy on the high seas are fully realized in Port Royale 2, and the intricate real-time design is geared to win over even those who aren't fans of economic simulations.

Accessibility is the biggest reason for this broad-based appeal. Unlike the first Port Royale, which dumped you into the deep end without even a tutorial, eight starter scenarios here cover every aspect of building a shipping career amid the feuding English, French, Spanish, and Dutch Caribbean colonies in the 16th and 17th centuries. Starting at the lowly rank of ship's boy, you soon trade goods, set up convoys with around a half-dozen different types of vessel from sloops to galleons, build businesses in towns, construct settlements of your own, stage sea battles, and even track Blackbeard for the governor of Havana. These scenarios practically form a game unto themselves. Most of these scenarios take well over an hour to complete, so by the time you're finished with them you'll be thoroughly prepared for the free play campaign (the game's only other mode of play).

Ease of use is further enhanced by the superb interface. Ships are maneuvered by right-clicking on a destination. Journeys can be accelerated by holding down the space bar to turn up time acceleration. Right-clicking on ports of call after arrival brings up the trading window, and this is where you buy and sell goods on a chart that shows prices and uses a color scheme to indicate the availability of goods. Yes, it's still a spreadsheet, but don't let that scare you--it's the most user-friendly spreadsheet we've ever seen in an economic sim.

Left-clicking on a town while you have a ship in port brings up a view of the settlement's buildings, which control most other game functions. Head to the shipyards to purchase ships, visit the governor's mansion to check on missions, drop into the inn for some gambling or to recruit a captain or pirate crew, and wander into the council building to hobnob with the upper crust. All activities and events are tracked in a log. Aside from a couple of miscues regarding minutiae like button size and location, the interface is a snap to learn.

The elegant trading engine at the heart of Port Royale 2 is complementary. You deal in 19 different goods, ranging from foodstuffs to building materials to finished items. Each of the 60 towns spread across the Mid-Atlantic and Caribbean, from Charleston in the north to Georgetown in the south, specializes in five products. The 48 colonial towns produce two essential goods like grain and fruit, two raw materials like sugar and cotton, and one processed item like coffee or tobacco. The 12 governor and viceroy towns produce essential goods and finished goods like meat and garments. These towns are also on European shipping lines, so luxury imports such as spices, wine, and tools can be found there. A handy map provided with the manual shows each town's products, regional specialties, and the colonial power spheres of influence.

Supply and demand rules everything. You buy low in a town where items are common and sell high in a town where they are not. You can make a killing moving coffee beans out of Venezuela, tobacco out of Cuba, and dyes out of Nassau. There are lucrative trading opportunities all over. Also, icons under needy towns alert you to what goods are scarce. Have a hold full of hemp? Scan the map and see which town is the most desperate to, um, make some rope. Such easily obtainable information makes it easy to get absorbed in the game for hours, going from port to port looking for the best deals and watching your bank account grow. It's incredibly addictive trying to figure out the most economical ways of setting up trade routes, largely because there are so many towns and so many possibilities.

That said, trading also comes with loads of complicating factors. The map and rate of consumption are designed to impede easy money runs. You can't produce enough of an item to ship it constantly, and even if you could, even the most voracious consumers eventually get their fill. Also, other traders regularly move in on your action, and random occurrences such as storms, plagues, rats, and wartime sabotage change supply and demand. Trade routes can be automated rather nicely, thanks to convoy captains who can be given direct orders to govern what to buy and what to avoid, but you need to micromanage to maximize profits and to develop new markets. This can cause the game to drag at first, as it takes many hours to learn who's selling and who's buying what goods, and to establish sensible trade routes. Before you can really play the game, you need to invest a lot of time in trial and error and pretty much memorize the map.

Making big bucks requires more than trading, too. Top profit margins are earned by selling your own goods, so it is vital to build businesses like cotton plantations, wheat fields, and the like. Business interests must be watched. Construction materials like wood and brick must sometimes be shipped in, workers often have to be imported, and residential areas must be built for employees. Businesses also have operating requirements. Money, raw goods, and other materials have to be provided. A cocoa plantation, for instance, wears out tools, so you have to keep importing them to maintain production.

The end result of all this commerce? Building a mini-empire. In addition to the free enterprise, you also accept missions for town governors. Build a respectable reputation with a particular nation and you can visit the mansion in the governor's towns for assignments like fighting another nation under a letter of marque, seizing enemy towns, hunting pirate gangs, and so forth. You can even marry the governor's daughter and gain the land needed to build your own town, with businesses and facilities like hospitals and schools. Of course, you can also go in the opposite direction and hoist the flag with the skull and crossbones of piracy.

No matter which way you go, combat is a bit of a low point. All of the arcade-style action elements feel tacked on to please the Pirates! crowd, and they don't complement the economic part of the game very well. Sea battles are real-time affairs where you control just one of the vessels in your convoy at a time. Lose one ship and you move on to the others, only giving up the fight when all of your warships have been destroyed. These engagements are always simplistic, spin-and-shoot scraps that begin and end very quickly--sometimes too quickly, as you can get ambushed by pirates and lose a whole convoy of ships in the blink of an eye. Town battles are equally basic, involving nothing more than knocking down gates before a time limit expires. And sword duels fought when a ship is boarded or at the climax of a town assault are clickfests so dumbed down that it's almost impossible to lose.

Visual presentation is another disappointment. Economic simulations are usually seen as the ugly kids on the PC gaming block, and Ascaron doesn't do anything to change that perception here. But even with the blocky minimaps and jagged town buildings and citizens, the map looks like a beautifully animated board game, with bright blue seas, lush jungles, and just enough 3D to satisfy graphics nuts. And the audio is fantastic. The soundtrack perfectly underscores the action, and it is catchy enough to keep you humming after you've shut down your computer.

Above all, Port Royale 2 is a remarkable accomplishment, largely because it can make economic simulations captivating even to those who may typically dislike the idea of this game genre. Ascaron has a lot of help from the picturesque Caribbean setting and the always-enticing lure of piratical plunder on the high seas, but the game design is so well thought out and executed that it would be a hit no matter what the backdrop. 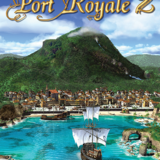