While it's a good game, Pool Hustler is a few steps short of what Backstreet Billiards has to offer.

For anyone who's watched The Color of Money, the only reasons for playing pool for real are those with dead presidents on them. That quest for the Benjamins is the motivation behind Pool Hustler, an above-average pool simulation that's well-rounded if a bit light in the reflex-testing department.

It should be noted that Pool Hustler offers a bit more than just playing for money. There's a great in-depth lesson mode to teach all aspects of pool, from aiming shots to jumping balls. A two-player mode offers 9-Ball, Rotation, 8-Ball, and 14-1 Continuous games. A trick-shot mode lets you execute 30 multiball trick shots. And there's also a very flexible practice mode.

Still, it's the story mode that's the reason for playing, as you bet cash against computer players of progressively tougher skill levels. As you beat players at different pool games, additional stages are unlocked. One cool feature in the story mode is the random "jeopardy" bet, where the computer asks if you want to bet on a single shot. Since these are a bit spontaneous, the occurrences add a little spice to the gameplay.

From a gameplay standpoint, this game tests the intellect and not reflexes, which is either a plus or minus depending on your point of view. All the shooting parameters - power, spin, angle - are determined first. Once you deem those settings OK, you press a button to execute the shot. This is unlike Backstreet Billiards and Virtual Pool 64, where some finger finesse/timing is required to win. As far as AI goes, the computer seems well able to pick the best shots, although foes tend to be easy to beat at the start (such as winning after a boneheaded opponent sinks the eight ball prematurely).

Graphically, the pool table and action are presented well enough, while the backgrounds are a bit sparse. It would've been nice if the computer opponent faces were animated a lot more when they talk, but otherwise, there's nothing to gripe about visually.

There are a couple irritating aspects in the story mode. The computer is sometimes slow in making decisions, plus there's extra "cue aiming" animation as your opponent prepares to hit a ball. This slows the game down a touch. As for the practice mode, there's no "optional" ball tracking so players can learn how to aim better, as there is in Virtual Pool 64. The music is bland; it would've been nice to have the ability to play music from any CD, like in Backstreet Billiards. There's also one minor interface gripe. Since X is the shot power/shooting button, its possible to accidentally flub a shot while using X to clear off an onscreen message. Again, this forces you to be cautious with your button pressing, which slows the game down some more.

While it's a good game, Pool Hustler is a few steps short of what Backstreet Billiards has to offer. It lacks any carom-type play and several play modes found in its main PlayStation competitor. (However, there is a hidden bowlliards play mode accessible by password - see the codes section for details). It's those drawbacks, plus other minor gameplay flaws, that keep this game from being great; instead it's merely good. 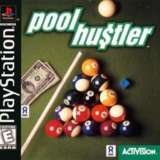 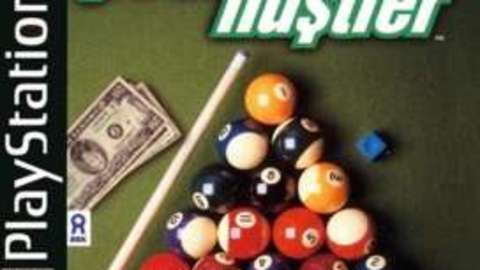 While it's a good game, Pool Hustler is a few steps short of what Backstreet Billiards has to offer.