A meager selection of gameplay modes keeps Trozei from being essential, but the core gameplay remains engaging, regardless.

Aside from its stunningly relentless fight for the hearts and souls of schoolchildren the world over, Pokémon is best known in the world of video games for consistently fun and accessible role-playing games, though it has regularly taken detours into other genres. It has experienced success with puzzle games in the past with Pokémon Puzzle League, and Nintendo goes back to that particular well with Pokémon Trozei for the DS. As easily as Trozei! could have been highly marketable trash, the gameplay actually has something new to say, and a change in art style makes things all the more interesting.

Pokémon Trozei cribs liberally from a number of established puzzle games, and the hallmarks of games like Columns and Bejeweled are in plain view, but it assembles the pieces into something fairly unique. You're presented with the familiar box-of-blocks playfield, which immediately begins filling up with icons for different breeds of Pokémon. Using the stylus, you can select an icon and slide it up, down, left, or right. Icons don't move independently, though, and when you slide one icon, it causes the rest of the icons in that row or column to slide as well. If you slide horizontally, the icons will wrap around, meaning that if you slide a row to the right, the icon that was on the far right will slide into the far left. Your ability to slide icons up is limited, but when you slide an icon down, it causes icons on the bottom of the column to fall back down from the top. The sort of curved-space logic that Trozei employs can be a bit much to wrap your head around, but it is one of the key features that give the game its unique gameplay style.

There are also new icons that regularly drop down from above, and you'll need to quickly make room before the entire playfield fills up. Initially you'll need to create a vertical or horizontal row of four identical icons, which will clear out those icons and activate a "Trozei Chance," which, for a little more than a second, makes it possible to clear out icons with rows of just three. If you're able to take advantage of that Trozei Chance, you'll then be able to clear out pairs of identical icons. You can slide around icons at will the entire time that the Trozei Chance is activated, making it quite possible to create huge chain reactions, which will net you big points. Things start off pretty slow, but the icons start falling more quickly, and with greater variety, the further you get into the game. The Trozei Chance system does a commendable job of injecting the game with a sense of urgency, and the way that icons wrap around the playfield flexes your puzzle game muscles in ways they're not really used to. The gameplay isn't without its faults--the manic pacing makes it difficult to really plan out high-yield chain reactions, with luck playing a bigger role than it ought to. Also, certain icons aren't as distinct as others, which can lead to some deadly hesitation.

What's most unfortunate about Trozei, though, is its meager selection of gameplay modes. Single-player options are limited to an endless mode and a short and sweet adventure mode, which sees you playing the part of some kind of Pokémon secret agent trying to recapture Pokémon that have been thieved by a shadowy organization. The adventure mode puts you through a series of increasingly difficult stages where you have to clear out a number of icons to advance, and it throws an occasional boss fight at you. There are also some training levels peppered throughout the adventure mode, where you're given a premeditated scenario that you have to figure out how to clear. These levels become downright diabolical later on, and had the developer cared, they could have supported a separate gameplay mode all on their own.

You can play competitive or cooperative games against another player locally, whether he or she has a copy of the game or not. Anticipating that Trozei will appeal to the playground set, the developers included an espionage mode, which, when activated, will constantly search for other nearby DSs that are also in espionage mode. If and when it finds one, it will automatically exchange information, possibly giving you the location of a rare Pokémon. Trozei subscribes to the copyrighted "gotta catch 'em all" mantra, and you collect Pokémon simply by clearing them out as you play the game. This has been an effective motivator in other Pokémon games, but since you don't really get anything from catching them all in Trozei, other than some kind of embarrassing bragging rights, it's kind of a moot point.

The Pokémon series has always been home to a hyperactive breed of anime, something that Trozei eschews for a more inspired art style that is more than a little reminiscent of Genndy Tartakovsky's work on Dexter's Laboratory and Samurai Jack--a style that, admittedly, has fast become almost as prevalent as the anime aesthetic in modern animation, but it's still a nice change of pace. Though the menus and the playfield show off a little bit of this funky flair, it really comes across best during the adventure mode, where the gameplay is punctuated by stylish little animated cutscenes that use both 2D and 3D graphics while, most impressively, maintaining a singular style. There are only a few different pieces of background music that match the game's feverish tone, but they can eventually wear out their welcome through sheer repetition.

The rather limited and predictable number of gameplay modes in Pokémon Trozei is lamentable, but the gameplay still holds up quite well, putting its own spin on the standards of the genre. There are certainly deeper, more robust puzzle games available for the DS, but Trozei is still fun and mostly recommendable, despite some missed opportunities. 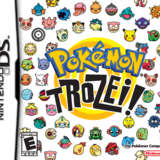 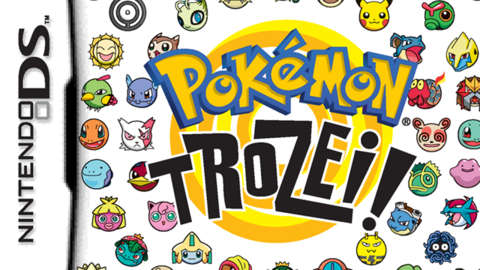 The player's objective in the game is to erase puzzle pieces on the screen by aligning four of the same kind together, either vertically or horizontally. All the puzzle pieces are shaped in the form of Pocket Monster faces.