The injection of Pokémon characters and aspects hasn't done anything to improve ChunSoft's oft-copied dungeon hack.

Lovers of all things Pokémon are bound to be disappointed by Pokémon Mystery Dungeon, as are those looking for a role-playing game to play on their preferred Nintendo handheld. For starters, it isn't even a true Pokémon game. Nintendo and ChunSoft have simply taken a dungeon hack that ChunSoft has produced for numerous other publishers in the past and integrated the Pokémon franchise's characters and a few of its key concepts into it. The real kicker, though, is that ChunSoft's game wasn't that good to begin with, and the injection of Pokémon elements hasn't done a thing to change that.

ChunSoft has been churning out Mystery Dungeon games for various publishers since the early 1990s. Although most were published only in Japan, a couple have made their way to North America, including Chocobo's Dungeon 2 and Torneko: The Last Hope, both for the Sony PlayStation. Like those games, Pokémon Mystery Dungeon has you exploring randomly generated dungeons and fighting the monsters inside them in a manner that combines real-time movement with some of the nuances of turn-based games. In a nutshell, every time you take a step or perform an action, the enemies in the dungeon also take a step or perform an action. You command a party of as many as four Pokémon. You have direct control over the lead Pokémon's actions, but the CPU controls the other characters. For the most part, what happens in the dungeons is all of the usual stuff that you'd expect from a dungeon hack. You can perform close-up or ranged attacks, throw rocks and iron scraps at enemies from afar, and pick up any items that happen to be sitting around. Pokémon become stronger and learn new attacks as they gain experience, various items can be collected and used, and gold can be collected for later spending in the village. Also, like every ChunSoft dungeon hack, this game has a hunger meter. If you don't occasionally eat an apple or a seed, you'll faint and leave the dungeon.

Suffice it to say, Pokémon Mystery Dungeon has more in common with a litany of dungeon hacks than it does with any of Nintendo's traditional Pokémon role-playing games. Whereas a typical Pokémon game has a large overworld with multiple environments populated with hundreds of villagers and Pokémon, this game has only a single small overworld village populated by a few chatty Pokémon and a handful of useful shops. Everything of note, whether it's recruiting additional Pokémon or fighting legendary Pokémon, happens in any of the game's 16 or so dungeons. The game explains away its deviations from the usual Pokémon blueprint through its story. You assume the role of a human who has been transformed into a Pokémon and whisked off to a disaster-plagued continent populated by wild Pokémon. After arriving in a tiny forest, you are greeted by another Pokémon and you both decide to form a rescue team. The purpose of a rescue team is to help other Pokémon that have somehow become trapped in dungeons. This serves as all the excuse the game needs to constantly send you into dungeons, as Pokémon are constantly delivering mission requests to your mailbox. The overall story, which can take anywhere from 15 to 20 hours to complete, also pulls you into dungeons to quell legendary Pokémon to get to the bottom of why the world is currently falling apart.

Key Pokémon aspects have been incorporated into the game to varying degrees. Since there are no trainers around, you can't add new Pokémon to your team by capturing them. Instead, the wild Pokémon you defeat in battle will sometimes offer to join your rescue team. In a traditional Pokémon game, the Pokémon in your party evolve once they have reached a certain level. Here, evolution isn't even an option until you finish the main story. And once it does become an option, it's simply a choice you can make by visiting a specific cave. The major share of evolved Pokémon can be recruited during the normal course of the game. The process of teaching Pokémon new attacks, on the other hand, works almost exactly as it does in standard Pokémon games. Pokémon learn new attacks when they reach certain levels, or you can use rare TM items to teach them attacks whenever you like. This game also lets you link multiple attacks together during a single turn. Rounding out the list of key Pokémon aspects that made it into the game are elemental affinities, which also function much the way Pokémon veterans are familiar with. Water Pokémon are strong against fire Pokémon, ghost Pokémon are strong against psychic Pokémon, and so forth. In some dungeons, weather conditions can also hinder or help your Pokémon.

While the inclusion of characters and aspects from the Pokémon franchise serves to give Pokémon Mystery Dungeon a familiar and friendly atmosphere, it doesn't do much to address the weaknesses in ChunSoft's original dungeon hack. Chiefly, the design is overly simplistic and gets old really fast. Each dungeon typically has anywhere from 10 to 30 floors, which all recycle the same bland background tiles and contain the same three or four wild Pokémon. Although you can perform four different attacks, in practice you'll stick to the same reliable move and watch the same battles play out over and over again. There's a tinge of strategy involving the orientation of your Pokémon in relation to the enemy during battle, but what this boils down to is that it's best to have an ally next to you so you can double-team enemies. Wild Pokémon aren't aggressive as it is, and they don't do much to exploit obvious weaknesses. Making matters worse, the CPU has control over the backup Pokémon on the team, which takes yet another layer of control out of your hands. In some cases, particularly boss battles, you can let the CPU do all the work. Dungeon hacks are repetitive by nature, but this one takes sameness too far. Incredibly, aspects that would have made the game more interesting, such as traps, the ability to dig, and the ability to choose leaders, are in the game, but they don't become available until you've already completed the main story. Other flaws, such as randomly generated layouts that place an exit right next to your entry point, or the glitchy CPU artificial intelligence that sometimes sends your allies prancing off in the opposite direction, don't help.

Nintendo and ChunSoft also didn't do much to spruce up the game's production values. Not that any Pokémon game has ever pushed a system's hardware, but the graphics and audio in this one fall somewhere between the Game Boy Color and Game Boy Advance in terms of quality. The small overworld village and friend areas, where you spend hardly any time, are lush and colorful and flaunt animated water and haze effects. By contrast, the dungeons, where you languish for dozens of hours, are put together with repetitive tilesets that employ barely any color or animation. The Pokémon themselves aren't very animated, except for footsteps and some choppy attack motions, but at least they're colorful and cute. As for the accompanying audio, it's nothing special. The different tunes are upbeat, but they loop incessantly, and the sound effects and Pokémon cries have a static buzz that makes it seem like they were ripped out of the original GBC Pokémon games. About the only thing developers got totally right in terms of production value is the story, which is charming and mushy like Pokémon stories are supposed to be. On the whole, the game feels dated. Worse, since the DS version contains all of the same graphics and audio as the GBA game, it seems downright ancient compared to games that have been developed exclusively for that system.

As it often does for Pokémon games, Nintendo has produced two corresponding versions of Pokémon Mystery Dungeon. This time around, however, one is available for the Game Boy Advance, and the other is available for the Nintendo DS. The story and characters in both games are identical, although each version contains a half-dozen Pokémon that aren't readily available in its counterpart. If you plan to get the game and have a choice of Blue Rescue Team or Red Rescue Team, you should opt for the Blue Rescue Team version on the DS. It doesn't look or sound any better than the GBA game, but the system's twin screens and touch-screen capability make it easier to stay informed and navigate the various menus. Health, status, and item indicators are constantly visible on the DS's top screen, while the lower screen displays the same top-down dungeon viewpoint and map overlay as the GBA game. The DS game also lets you open menus, make choices, and select enemies simply by tapping the stylus in the appropriate spots on the touch screen.

Nintendo, of course, would prefer that you pick up both versions or convince one of your friends to pick up the version that you passed on. The incentive is that people with both games can take advantage of various connectivity features, such as the ability to share items and trade missions that unlock the few Pokémon that are normally exclusive to a particular version. The only way to recruit all 387 pocket monsters is to trade between the two versions. You can also call a friend for help or answer your friend's call for a rescue. Indeed, when your team is knocked out in a dungeon, you have the option to send a rescue request to your friend. If your friend accepts the request, he or she can journey to the corresponding spot in his or her game where you were knocked out and revive you with all of your loot intact. After the rescue, your friend can even choose to give you a Pokémon to fortify your squad. Friends can send and receive rescue requests and items in a myriad of ways. Two copies of the DS game can initiate a wireless link, two copies of the GBA game can initiate a cable link, the DS and GBA games can share data when both versions are plugged into a single DS, or you can use passwords to send items and requests between any two versions of the game. Passwords are a pain to input, though, since they're a whopping 54 characters in length. Sadly, the game doesn't appear to interface with any other Pokémon games.

No matter how much you claim to love Pokémon, you should probably skip Pokémon Mystery Dungeon. It may contain plenty of recognizable Pokémon creatures and incorporate some of the franchise's key concepts, but it's nowhere near as diverse, slick, or fun as the canonical Pokémon role-playing games produced by Game Freak. Odds are that even staunch fans of the dungeon hack genre will find this game far too simplistic and repetitive for their tastes. 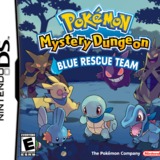