Colosseum largely gives fans what they want, which is lots of real freaky-looking monsters and lots of battling.

Though its popularity isn't quite at the same fevered pitch it was back in the late '90s, Nintendo's Pokémon franchise still seems to have some spark left in it. The perennial pairs of Pokémon games that show up on the Game Boy platform have maintained a level of quality that, despite an aesthetic that some find too saccharine, has kept the franchise fresh and accessible. Though the weird metagame known as Pokémon Channel was released in the States a few months ago, it's been a long time since a real Pokémon game has been released outside the GBA, and the new Pokémon Colosseum does a decent job of filling this void. As the successor to Nintendo's Pokémon Stadium games for the N64, Colosseum largely gives fans what they want, which is lots of real freaky-looking monsters and lots of battling. It can be pretty fun, even if you're not already sold on the whole Pokémon thing, though it's probably not the best introduction to the franchise for novice players.

While the Pokémon Stadium games were purely about taking your Pokémon into battle, Colosseum includes a full-on story mode, though a lot of it just seems like window dressing. The story revolves around its two main characters--a teenage boy and a young girl. The teenage boy has stolen technology that gives him the ability to snag Pokémon from their trainers right in the middle of battle, while the young girl has the ability to see the aura of "Shadow Pokémon," who differ from your standard Pokémon in that they're unafraid to attack people. In one of the game's most unintentionally hilarious lines, it's explained that the Shadow Pokémon are really just regular Pokémon who "have had the doors to their hearts artificially closed." The pair of teens take it upon themselves to snag as many of these Shadow Pokémon as they come across in hopes of stopping the people behind this treachery. The story and the dialogue are pretty lame, but it's still an improvement over the battle treadmill that the Stadium games put you on.

The core Pokémon games have always been the kinds of RPGs that, even if you had a hard time playing RPGs, you could pick up and play with little difficulty. Colosseum follows much the same design ethic. Though you'll spend time running around the world, having conversations with various characters to move the story along, and buying the occasional piece of Pokémon-related gear, the meat of the game remains the fighting. Contrary to what the game's title might suggest, you'll be doing a lot of your fighting on the streets against random trainers you'll encounter, though you'll also battle in several coliseums, as well as in some Pokémon gyms along the way. The combat should be pretty familiar to Pokémon fans. Like Ruby and Sapphire before it, Colosseum lets you put two different Pokémon in play at the same time, which is significant because it adds an extra bit of strategy to the action by letting you use one Pokémon's status-enhancing abilities while the other attacks your opponent.

Though wandering through the wilderness and catching wild Pokémon that you randomly encounter represent the fundamentals of the core Pokémon games, there aren't any wild Pokémon around in Colosseum, so the only way to increase the size of your roster is to snag Shadow Pokémon from the trainers you fight. Shadow Pokémon can be used almost immediately after they've been snagged, but a Shadow Pokémon has only one attack, and it will sustain damage every time it uses this attack. If you want to "reopen" the hearts of your Shadow Pokémon, you'll need to use them in battle, which will slowly clear the Pokémons' shadow meters. This can be a little tedious, so you might find yourself relying a lot on the two, non-Shadow Pokémon you start the game with simply because they're more useful right out of the gate. The least that can be said about the whole Shadow Pokémon system is that it's unique, but it also seems kind of obtuse. It doesn't ruin the game, because the core gameplay is inherently pretty fun, but it would probably appeal more to fans if the game were structured as a more-traditional Pokémon game.

The story mode, which can provide you with a solid 10 hours of Pokémon fun, is where Colosseum invests most of its energy, though there's other stuff to keep you occupied as well. If you've got friends who are into the whole Pokémon thing, either two or four players can take the Pokémon they've built up in the story mode to have them battle it out against one another. There's a little bit of the patented Nintendo connectivity fun in Colosseum as well. So if you have a GBA, a GBA-to-GC link cable, and either Pokémon Ruby or Sapphire, you can transfer any Pokémon you've been training on the GBA into Colosseum's battle mode.

The visual style of the Pokémon franchise has been getting stranger and stranger over the years, and it appears that the whole thing has gone off the deep end in Pokémon Colosseum. Never mind the actual Pokémon, many of which look downright hallucinatory. The people that populate the world of Colosseum, who previously looked like anime versions of regular suburban kids, have become freakishly overstylized. The aesthetic has become slightly more teen-friendly, but the game still can't shake the cutesy undercurrents that course through all things Pokémon. Technically, a lot of the game is kind of bland, with really boxy, generic-looking environments. Despite their rather deranged costumes, the character models look decent, though they look a little stiff in motion. The N64 roots of Colosseum are apparent in much of the game's presentation, which generally has a rather sparse, barren look to it--with the main exception being the Pokémon themselves. The pocket monsters get some good attention here and are easily some of the sharpest, cleanest, most well-animated renditions of these creatures to date. The game is good about laying on lots of cool-looking special effects for attacks, and these dazzling little bursts of light and smoke definitely keep the battles fun to watch. If you're a Pokémon freak, the great-looking monsters and the slick battle effects will make it much easier to forgive many of Colosseum's other visual shortcomings.

There's nothing so impressive in the sound department, though. All of the dialogue is delivered through subtitles, and the Pokémon are generally pretty quiet, which is really rather disappointing. There's some decent music, though you get the sense that there was some cultural misinterpretation on behalf of the sound designers, since some of the music just doesn't quite seem to fit the situation. The more glaring examples of this include the low-key bebop music that plays when you arrive in a seedy town that's been overrun by a gang and the percussion-heavy salsa music that kicks in when Miror B., a supposedly disco-loving villain, arrives.

It's definitely a much better-looking game than either of the Pokémon Stadium titles, and the new story-driven adventure definitely gives you more context to the fighting (in addition to providing more stuff to do), but otherwise, the game isn't very different from its predecessors. Still, despite the sense that you've done this before, the upgrade to the game's visual clarity will make it a good buy for fans. Those who aren't already committed to the world of Pokémon may want to go with one of the core Pokémon games first, because any of those games is deeper and more fully realized than Colosseum.

View Comments (1)
Back To Top
7.3
Good
About GameSpot Reviews 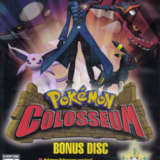