If you do have a Transfer Pak, want to get more out of Gold or Silver, and enjoy a lot of battling, then Stadium 2 is a complete package and is definitely worth picking up.

The highly successful Pokémon Stadium was less of a stand-alone game and more of a graphical expansion pack made to accompany the best-selling Game Boy Color Pokémon games. The premise was simple: Raise your Pokémon on the handheld and send them into battle in full color 3D against friends or the CPU on your N64. The game certainly had nowhere near the amount of depth available on the Game Boy but made the perfect companion piece for the Pokémon enthusiast who needed everything. This year's Pokémon Stadium 2, appropriately housed in a gold and silver cartridge, improves upon the original's formula in nearly every category, although its status as a quality stand-alone game is still questionable.

From the moment you first press start, you are bombarded with options and play modes. Battle now! initiates a quick battle with a random set of Pokémon. The event-battle mode is a two-player battle that lets you configure the rules to your liking. Once again, the focus of Stadium 2 is clearly on the tactical battle elements of Pokémon, eliminating the RPG elements that made the Pokémon series so well rounded.

Those familiar with the first Stadium game will notice that combat has remained essentially unchanged, save for a few welcome menu-based changes and slight graphical tweaks. As before, a group of Pokémon is chosen for each side, ideally balanced enough to challenge any opposing roster. Pokémon perform attacks, dole out punishment, and are called back to the reserves for substitutions, battling until one side has been defeated. Selecting techniques has become significantly easier for those not familiar with every attack in the Game Boy game, thanks to a detailed onscreen summary of move effects and statistics such as type, strength, and accuracy. Awkward moments where players stare at the screen trying to decide whether a metronome, leer, charm, or sunny day would be appropriate can now be avoided, and the game is much friendlier for inexperienced players.

If battle is the heart of the Stadium series, the graphics are clearly the body. The 249 Pokémon available in Stadium 2 are rendered in full 3D, complete with a proper repertoire of over-the-top attack effects. The characters are large, nicely rendered, and faithfully represent what you would expect of the cartoon and handheld's newest stars. The techniques are each accompanied by a brief animation, such as an onscreen sandstorm, a colorful shower of light, impressive chrome effects, and the like. Attacks have been altered to accurately represent the way each individual Pokémon would perform them. For example, Dragonite's fly attack is preceded by a frantic flapping of miniscule wings while Delibird, the over-the-shoulder-sack-wielding birdlike creature, takes flight by flapping one wing up and down in a comical motion. Although frustratingly ineffective, Caterpie and Metapod's defense techniques also serve to show off how nicely the attacks look in Stadium 2.

The menus are very nicely designed and are easy to navigate--a must given the game's many options. The artwork as a whole is solid, and the trainers and characters encountered follow what we've come to expect of the Pokémon series. However, the battle arenas are plain, drab, and generally an eyesore. Although the variation is sufficient--you can fight in a baseball diamond, a library, and many other arenas--not one of the areas is detailed enough, with a total lack of any appreciable textures, shadowing, or other graphical effects.

The single-player gym-ladder castle mode has returned, this time with 21 different opponents with level-50-plus Pokémon, including the gym leaders found in Pokémon Gold and Silver. Familiar faces like Misty and Brock can be found therein, and while the battles against the CPU opponent are predictable and easy to counter if you have knowledge of the types and proper matchups, they remain entertaining nonetheless. Besides taking on the gym leaders, you can participate in a free-battle mode, alone in single competition or with up to three friends in team competition. The team mode uses a tag-team mechanic: When one player selects the Pokémon battle option, his or her teammate depresses the appropriate button to toss a reserve Pokémon into the fray.

Pokémon Stadium 2 presents a number of options outside of the gym-leader castle and battle modes. You can spend time in Oak's laboratory, where you can peruse your collection of Pokémon and examine items you have found. Arranging Pokémon into groupings of your choice, such as level, gender, tameness, and type is allowed. The Pokedex has returned, and it's more versatile than ever. You can check each Pokémon's specific data, display a full-screen image of the Pokémon, and examine a full color map of Gold and Silver to locate areas where each creature lives.

If battling gets boring, you can compete in the 12 new Pokémon-themed minigames. The games are simple to understand but difficult to master, and they are better than most of the games found in Nintendo's Mario Party series. The games range from button mashers to revamped classics. In a test of speed in a feudal Japanese setting, Scythers and Pinsirs time their slashes on quickly falling logs. In a test of reflexes, Eevees enter a musical-chairs-type contest and snatch up fruit when the music runs out. And Pichus charge up power plants faster the more you pound on the buttons.

For those with a Pokémon Gold or Silver connected via the N64 GB Transfer Pak, you'll earn a mystery gift every 24 hours. The gifts vary and can include techniques and relatively rare items. These items, as well as some of those found in your Game Boy game, may be used to redecorate your room and are also accessible via the game's main menu. The room looks identical to the main character's room from Gold and Silver, although now in 3D, and can be adjusted to fit your individual tastes, similar to a trophy case in other games.

Getting familiar with all the items, Pokémon, and techniques can be difficult, and anticipating this, Nintendo has included Earl's Pokémon Academy in Stadium 2. You can attend classes at the academy, graduating from trainer to gym leader to elite four after answering questions, taking tests, and defeating fellow students in what can be seen as an alternate and relatively deeper story mode. Casual fans of the franchise will be astounded at the depth of information imparted in the lectures and will come out of the academy with a much better understanding of Pokémon. If taking classes isn't your thing, but you have a specific question, you can peruse the library's stacks where the answer to seemingly every question can be found. The academy is the perfect place for honing your knowledge of the franchise and is a necessary and often enjoyable chore that will prepare you for success in the quiz-show modes. When competing against yourself, the CPU, or human opponents, you are asked a series of multiple-choice questions. While it may be embarrassing for older players to admit to knowing what certain TMs do and how many tails a Tauros has, the questions are often tricky and enjoyable for those who tire of constant battling.

Stadium 2 is fully compatible with every version of the Game Boy Color Pokémon games via the Game Boy tower mode. Using tower mode with a Pokémon cart hooked in the GB Transfer Pak lets you play any of the Pokémon GBC games on your TV, and it is a very nice touch. Additionally, playing your GBC Pokémon games through Stadium 2 unlocks some special items in the Game Boy games. Stadium 2 also lets you trade items between GB carts and send items to and from Stadium 2 for analysis in the laboratory or trading sessions. Your own uploaded Pokémon maintain their move lists, are a slightly different shade from the set available on the cartridge, and can use attached items found in Gold and Silver.

Disappointingly, the lackluster sound effects, music, and commentating from the original Pokémon Stadium has returned in Stadium 2. The Pokémon speak in generic bleeps and squeaks, like the Game Boy games, rather than hilariously repeating their names as in the cartoon. The commentary is pretty drab, and thankfully it can be disabled.

You really need to own a copy of Pokémon Gold or Silver to get the most out of Stadium 2. Without the GBC cart and a Transfer Pak, you lose access to nearly half of the game modes and much of the expansion to the original handheld game that Stadium 2 offers. Playing the GB game full-screen and finding new items along the way is often more exciting than the exclusive modes on the N64 cartridge. If you do have a Transfer Pak, want to get more out of Gold or Silver, and enjoy a lot of battling, then Stadium 2 is a complete package and is definitely worth picking up. 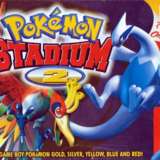