If you've played Pokémon Puzzle League on the N64, you're already familiar with Pokémon Puzzle Challenge. Despite a few missing options and the addition of Gold/Silver Pokémon, the games are roughly identical. What you may not realize, however, is that Pokémon Puzzle Challenge isn't just a generic puzzle game surrounded by Pokémon characters. Instead, Nintendo has taken one of its most beloved SNES-era classics, Tetris Attack, and given it a Pokémon-themed facelift.

Although formerly dubbed Tetris Attack, Pokémon Puzzle Challenge has little to do with Alexey Pajitnov's historic creation. You begin with a pile of cubes called garbage. Your job is to clear away the garbage by matching cubes of the same color into lines of three or more. When those lines disappear, the remaining garbage falls into place, sometimes causing further chain reactions. If you're unsuccessful at clearing the garbage, the pile will eventually collide with the top of the screen, which ends the game. What makes Pokémon Puzzle Challenge exciting is its system of groups and chain reactions. Single matches and chains can remove four, six, ten, up to 30 cubes at a time from the screen! Where Tetris was merely a game of shapes, Pokémon Puzzle Challenge is a game of color, coordination, and chain reaction.

In keeping with Pokémon tradition, each of Pokémon Puzzle Challenge's six single-player game modes also encourages the collection and battling of Pokémon. In the challenge mode, you'll face off against a series of CPU-controlled opponents and try to bury them in unwanted garbage through the deft completion of combinations and chain reactions. Depending on your performance, namely how many chains you complete or how fast you defeat your opponent, hidden trainers may challenge you to a grudge match. Pikachu, Pichu, Togepi, and Marill are just a few of the many Pokémon you can acquire via this route. Puzzle mode also offers hidden Pokémon, such as Igglybuff and Magby, provided you can solve each of its 163 unique layouts in four moves or less.

The rest of Pokémon Puzzle Challenge's modes don't present as many surprises as the challenge and puzzle options, but they offer up enough variety in their own right. Garbage mode is similar to challenge mode, except the onslaught of unwanted garbage pieces occurs at timed intervals. In the time and line clear modes, you're racing the clock to achieve a high score before your time expires or your pile ducks below a certain level. By contrast, marathon mode eschews any such limitations or opponents, simply pitting you against your own endurance. If you have a link cable and a friend, the game's two-player challenge, time attack, and line clear options further extend its already healthy life span.

In addition to creating an addictive game that's fun to play, Nintendo has also done an excellent job of integrating the Pokémon storyline and characters into the game's overall presentation. Professor Elm occupies help screens that provide hints and tips as you go along, while familiar characters, such as Falkner and Bugsy, cross your path throughout the championship and line clear modes. When you're engaged in battle, the Pokémon characters you've collected don't just sit there transfixed in cute poses - they actually react to your progress by making faces or barking out their familiar battle cries. Even the game's music, a selection of tunes ripped from the five previous Game Boy Pokémon games, makes it hard to believe that the game originally started out as a Tetris wanna-be.

Nintendo's Game Boy Color seems to be the system of choice when it comes to puzzle games, and Pokémon Puzzle Challenge is no exception. The absence of the Nintendo 64 version's puzzle edit and 3D modes hurt the game's overall value, but only by the slightest of margins. With its 25 Pokémon, six unique game modes, three two-player modes, adjustable difficulty levels, demo theater, and multiple save slots, Pokémon Puzzle Challenge is a game that does the Pokémon license proud. 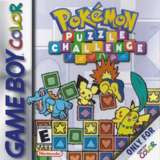