I Wanna Be The Very Best, Like MOBA Ever Was

For the Pokemon brand's first foray into a new genre, Pokemon Unite gets a lot of things right. The game certainly feels like a MOBA a la League of Legends or Dota 2, just in a much easier to understand presentation for those who've never played one before. Matches are short, snappy affairs with plenty of action and strategy. Learning each of the five classes is fun and rewarding. Each skirmish within a match ups the ante, increasing tension and excitement until it boils over in the final stretch. It's just a shame that the confusing in-game economy composed of multiple currencies and a loot box-style lottery system can sometimes get in the way of the game's fun.

For those unaware, Pokemon Unite is a "multiplayer online battle arena game" or "MOBA." Two teams of up to five players choose a Pokemon, then enter an arena where they defeat wild Pokemon in the environment to gather energy and experience. Experience levels up a Pokemon, increasing its stats and powering up its moves, while energy is used to score points and win the game. This is where Pokemon Unite separates itself from traditional MOBAs. Pokemon must take their stored energy to an opposing team's goal and "dunk" it through the hoop to score points equal to how much energy the Pokemon held. The dunking sequence itself is wonderful, with the Pokemon slamming the energy down through the hoop with force and excitement that will put a smile on your face. Dunks aren't the only scoring method though, as special wild Pokemon sometimes appear that give temporary buffs or extra points, but they are rare and sometimes one-time occurrences during a match. When time runs out--10 minutes in a standard match--whoever has the most points wins.

This goal-scoring approach is different from established MOBA games--League of Legends, for example, requires that a team enter the enemy's base and destroy the Nexus--but it's a fantastic choice in action. Most of the wild Pokemon lining the arena aren't difficult to defeat, so even novice players will be able to gather energy easily. Some goals can only have so many points scored on them before they break, meaning disabled goals force you to progress further into the opponent's side of the arena to find a new one. It's a fun spin on the core objective of a MOBA match, taking something like defeating towers in LoL in order to progress and making it unique. Also, since the goals don't fight back like LoL towers do, new MOBA players won't need to worry about extra threats when trying to score.

Pokemon Unite does a great job of making each match feel exciting. As this is a team game, you'll feel a quick bond with teammates who stick to their roles and support as needed, and you'll feel embarrassed for the one player doing their own thing and getting crushed for it. Every mid-match skirmish where you and your teammates are meeting a group of opponents is tense and exciting, and emerging victorious is thrilling. That 10 minute timer feels like it breezes by due to how much fun each match can be.

The 20 Pokemon on the Pokemon Unite roster fall into one of five categories: Attacker, All-Rounder, Speedster, Defender, and Supporter. These categories describe how each one should be controlled, leaning into the genre's strategic elements. Attackers are better suited for the frontlines, taking out enemies and scoring loads of points, while Defenders keep the team's goals safe from attack, for example. It's simple, it's straightforward, and it's exactly what a MOBA for genre newcomers should be. You'll know exactly what style of match to play depending on the Pokemon you choose, which for a brand-new MOBA player is a huge comfort. That's not to say things don't change mid-match, but taking that uncertainty out of the character-select screen lowers the barrier of entry, which is better for everyone.

Team balance is a big factor in a MOBA player's success, and the game does a good job of allowing players to balance their teams how they wish. Small hints on the character select screen will let the team know which roles are not yet filled, while chosen Pokemon are faded out to clearly show who's still available. Experimentation is encouraged in Pokemon Unite matches, allowing you to tinker with team composition until finding what works for your group. This freedom makes the game even more fun, delivering a unique experience in every match.

Despite having different classes, all Pokemon are controlled with the same simple button scheme. As you gain experience, the Pokemon's special attacks will power up, first changing to a new move and then adding an enhanced version. While that sounds like a lot, the game does a great job of making everything clear in real time. Pikachu, for example, starts with Thundershock as a special attack, but at a certain level it will change to either Electro Ball or Thunder with a single press of a button. You don't have to sort through menus or take minutes to power up--one simple press and you have a new move. It's yet another lowering of the entry barrier for new MOBA players, and it's well appreciated.

That touches on the best part about Pokemon Unite; it serves as a tremendous entry point into what may be a new genre for many players. It's easy to pick up and play, giving everyone a chance to learn what MOBAs are all about. That said, genre veterans may find the game a little too simplistic, lacking the deep gameplay and strategic elements of LoL or Dota 2. There are no minions running around to farm for experience, and every player must head into the wild area--or "jungle" in MOBA speak--in order to level up. Pokemon Unite feels more of a stepping stone to other MOBA games and not the other way around, meaning longtime MOBA fans might feel underwhelmed with what they find.

The speed of the matches coupled with the approachable mechanics makes grinding for higher levels easy without feeling repetitive. Grinding has its benefits, too, with Trainer Levels that give you access to new modes and rewards and an optional Battle Pass that gives even more reward drops. There are ways around grinding as well if you want to speed things up, but unfortunately that means you have to deal with microtransactions, the Achilles' heel of Pokemon Unite. The game's easy, streamlined processes in gameplay goes out the window when the game's economy enters the discussion.

There are five different in-game currencies, four of which are earned by playing. Aeos Coins are the most prominent currency and are earned after every match (as well as given as rewards for daily events, Trainer Level up rewards, and more). Aeos Tickets purchase items and enhancers and are earned from events as well. There's also Fashion and Holowear Tickets--used to obtain Trainer skins and Pokemon skins respectively--that only come from the loot box-esque random draw called the Energy Reward system. The lone premium currency are Aeos Gems, which are only available via real money and can be used to purchase some of the things the other free currencies can buy, like Unite Licenses to access playable Pokemon or boosts to Battle Points to gain levels faster.

Having five currencies is an unnecessarily confusing system. Granted, four of them are earned by playing the game, meaning that everything available can technically be earned by grinding out matches, but the rates at which some currencies are earned are unreasonably low. Take the Holowear Tickets for example, which are earned one of two ways: complete the 90-level Battle Pass and earn a Battle Pass Prize Box, or get a lucky break in the Energy Reward lottery system. A chance in the Energy Reward system is given every five matches, but even then the chance of pulling the Holowear Tickets is very low. Then again, should you be lucky enough to pull the Holowear Tickets, you'll only get 10, and currently the cheapest Pokemon skin available via Holowear Tickets costs 18 tickets. The quickest way to increase your chances is to buy extra Energy Reward lottery chances in the Shops--and those are only available for premium Aeos Gems.

This paid currency would not be inherently bad if it were only used for cosmetic items such as those skins. As long as the game lets you earn the important things--Pokemon, battle items, etc.--by playing the game with no financial influence, the premium Aeos Gems would be a harmless addition to be ignored. Unfortunately, that's simply not the case, as Gems can also be used to purchase Unite Licenses to unlock Pokemon and temporary boosts for Aeos Coins and Battle Pass Points, allowing you to more quickly unlock items that can be used in battle.

While buying a Unite License for a Pokemon just gives a player access to that Pokemon early--which isn't a big deal outside of being able to use a Pokemon in battle sooner--it's the items that are a key example of why this economy can feel unbalanced. In the Shops are two types of items: Held Items, which give your Pokemon permanent boosts in a match; and Battle Items, which are activated with a button press and give a quick temporary perk like healed damage or increased attack power. Pokemon can have up to three Held Items and one Battle Item assigned at a time. These items must be purchased in the stores before they can be equipped onto a Pokemon.

What's not enjoyable is the game's economy, a confusing mess of multiple currencies and systems

By pumping money into the game via the premium currency, either to boost Coin gain or using the Gems to purchase the items directly, a player can purchase and use these items faster than someone who's not buying Gems. Items are also included in the Battle Pass, so buying Battle Pass Point boosts with real money will unlock those items faster as well. What's more, these items can also be leveled up with Item Enhancers, yet another currency earned in-game that can be boosted with premium currency, increasing the disparity gap even further. All of this leads to a scenario where players who don't want to spend money may find themselves itemless against a team of fully decked out opponents, putting the player that hasn't purchased currency at an immediate disadvantage. 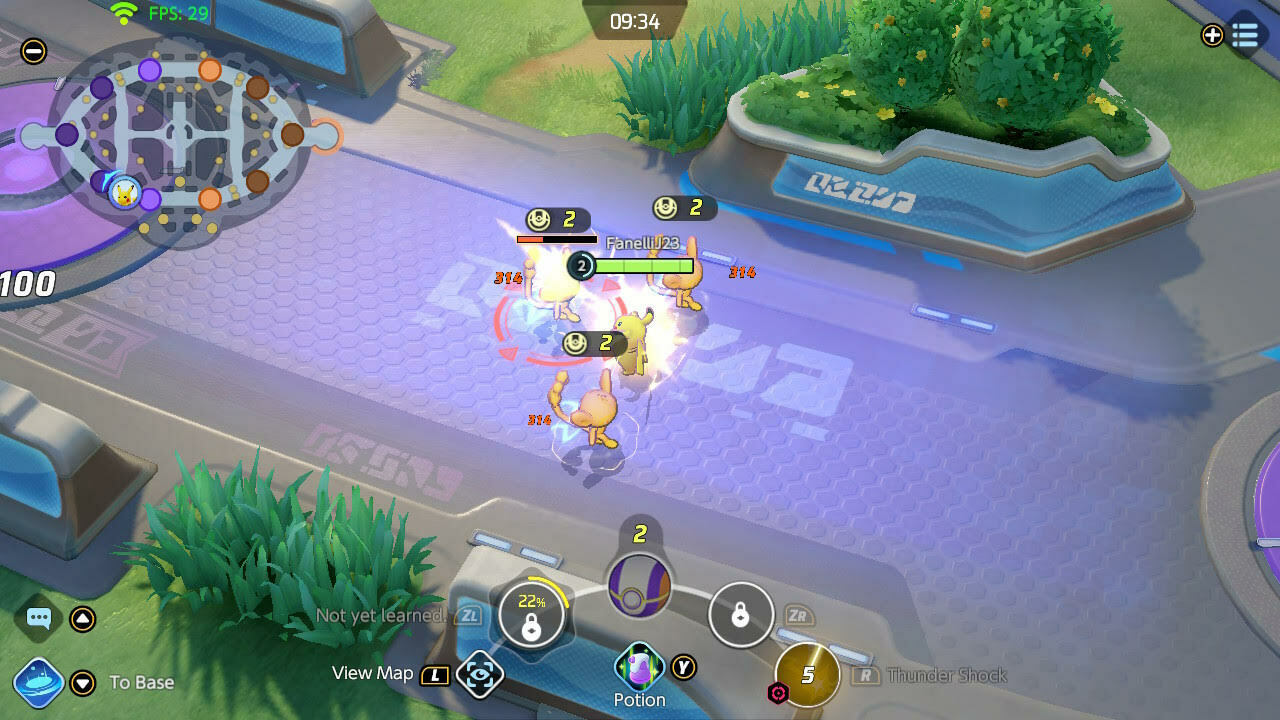 Don't get me wrong: Pokemon Unite is an enjoyable game. The MOBA genre fits the Pokemon franchise very well, and as more Pokemon are introduced, the metagame will likely continue to evolve and may introduce more fun opportunities to strategize. Dropping into battle with new builds and trying new things is fun, as is taking a newly earned Pokemon into a battle and seeing what they can do. What's not enjoyable is the game's economy, a confusing mess of multiple currencies and systems designed to make paying for premium currency look like the easiest option to succeed. If microtransactions weren't so incentivized we'd be looking at the next major Pokemon success story. Knowing that they are, however, player--and considering this is Pokemon, parent of player--beware.

Jason Fanelli united with Pokemon and battled it out for over ten hours, playing multiple matches and practicing with each Pokemon. The game was downloaded from the Nintendo eShop on the Nintendo Switch.