You really can't go wrong with 251 monsters, two main adventures, countless side quests, and a baseline of 60 hours of gameplay.

It has been three years since Ash Ketchum completed his quest to become a Pokémon master. Since that time, the world of Pokémon has changed considerably. New gyms have sprouted up in countless lands, the number of would-be trainers has increased, and new species of Pokémon are being discovered daily. As such, Professor Oak's Pokédex is out of date. A new trainer must step up to the plate, one willing to serve the world of research while pursuing his or her own dream of becoming a Pokémon master. In Pokémon Gold/Silver, the true Game Boy Color sequel to Pokémon Red/Blue/Yellow, you will heed the call. You'll want to set aside a good chunk of time though, because 251 Pokémon, 16 badges, more than 500 trainers, 100 new moves, and over 60 hours of gaming awaits.

In Pokémon GS, you assume the role of an up-and-coming trainer. From your mother's house in the peaceful village of New Bark Town, your adventure begins with a short visit to the laboratory of Professor Elm. You're given a single Pokémon to start out with and are asked to complete the Pokédex, a creation of Elm's peer, the venerable Professor Oak. Across the land of Johto, you'll battle, capture, and train Pokémon, topple the resurgence of Team Rocket, and defeat eight gym leaders for the right to challenge the Elite Four in the Pokémon League. Your journey will not end there, however, as the continuation of your quest will reunite you with your old pals Ash, Brock, and Misty, as well as yield a few new surprises. Completing the Pokédex isn't going to be easy.

At its heart, Pokémon GS is just your standard strategy RPG with a number of collecting elements thrown in. You follow a circular route through nine main locations, acquiring eight gym badges while participating in a number of side ventures. You'll level up your Pokémon through a series of random battles and eventually end up back in your hometown of New Bark Town before heading off to the Pokémon League. It may seem contrived to tack on an additional quest after you've defeated the Elite Four; however, the joy of the game lies not in its underlying design, but with the details. Every plot and subplot is well explained and translated, giving the game a variety of intricate stories that get your brain working. The battle system itself encompasses all that is great about turn-based RPGs and features a decent mix of attacks, items, and strategy options. You can carry up to six Pokémon with you at a time, and each may possess up to four attacks. A computer network within the game lets you swap out items and Pokémon at your leisure, providing unlimited storage for anything you may need. Nintendo has made a few necessary gameplay tweaks as well. Pokémon can now carry items into battle and use them when the situation requires. Some items even yield new evolutions when the Pokémon carrying them are traded. Formerly useless moves, such as metronome, have been greatly improved, while unfair moves such as earthquake don't overly bludgeon the competition. The addition of new Pokémon also fills out previously lackluster evolution chains. If you thought Hitmonlee and Hitmonchan were cool, just wait until you snag a Hitmontop. Supporting these refinements, a plethora of new HM and TM moves gives you more control over what moves your Pokémon learn, while an in-game move eraser allows you to unlearn moves should the need arise.

Besides solid gameplay, a big part of Pokémon is the collecting aspect, especially the monsters themselves. Pokémon GS adds 100 new Pokémon to the ever-growing menagerie of pocket-sized battle beasts, bringing the grand total to 251. At the beginning of the game, you're once again presented with a trio of Pokémon to choose from: the fiery aardvark, Cyndaquil; the wily alligator, Totodile; and the bizarre plant Pokémon, Chikorita. As you progress, you'll encounter a whole smorgasbord of new Pokémon. Some are cute, such as the aquatic mouse, Maril, while some are downright bizarre, such as the dark-type teddy bear Pokémon, Teddiursa. There's even a subtle homage to Blade Runner in the form of the electric sheep Pokémon, Mareep. In addition to the previous 15 types of Pokémon, two new types have been added to the mix in Gold and Silver - dark and steel. Dark-type Pokémon are strong against psychic Pokémon, while steel-type Pokémon give plants a run for their money. Once again, since neither Gold nor Silver contains all 251 Pokémon, you'll need to trade with a friend to acquire the ones you're missing. You can also use the link-cable stations in Pokémon Centers to import Pokémon from previous versions of the game or to battle friends in the cable club coliseum.

Although a sequel, Pokémon GS isn't just about beefing up preexisting elements. Sure, the full-color environments and restyled Pokémon portraits are great to look at, and yes, the remixed music and battle cries make the game fun to hear. For that matter, no one's going to scoff at the game's dynamic attack animations or onscreen experience meter either. However, the game also features a number of new, groundbreaking features, most of which have never been seen in handheld RPGs.

The first major addition to Pokémon GS is the presence of a time element. When you first activate the game, it will prompt you to enter the current time and day of the week. Once set, the clock tracks the real time in hours, minutes, and days, even if the Game Boy is off. Although it may sound like a gimmick, the addition of a clock adds quite a bit of variety to the game. Nocturnal Pokémon only come out at night, while day-roaming Pokémon sleep during this time. Furthermore, many items or events must be triggered or acquired on specific days. Good examples of this include the S.S. Aqua, which you can only sail upon on Tuesday and Saturday, and a Pokémon-catching contest that occurs every Tuesday, Thursday, and Saturday. Admittedly, the decreased selection of Pokémon and darker locales makes nighttime playing a bit boring, but the game more than makes up for it with all of the goodies you can acquire, thanks to the inclusion of a real clock.

The next greatest improvement in Pokémon GS is one you'll only come to appreciate after a few hours of playing: the new and improved item system, dubbed Pokégear. The Pokégear, a combination backpack and personal data assistant, contains multiple pockets for items and communications options. There are four pockets: one for status items, one for Pokéballs, another for TMs/HMs, and one for key items such as bicycles and fishing rods. The increased level of organization is nice, but a pleasant side effect is that you can now carry more items. Instead of the 20-item limit from Red/Blue/Yellow, the Pokégear has spots for 20 status item types, 20 key items, 20 Pokéball types, and an unlimited number of TMs and HMs. In addition, the Pokégear also gives you access to a comprehensive world map, a radio for entertainment purposes, and a cellular phone for keeping in touch with the game's many characters. The cell phone is especially nice, in that it not only allows you to beg Professor Elm or Oak for hints but also lets you routinely challenge any of the game's trainers to rematches.

The final major change in Pokémon GS is the inclusion of Pokémon gender and breeding. Despite a few notable exceptions, such as Mew and Mewtwo, every Pokémon comes in male and female varieties. In the beginning, gender isn't that important to the outcome of the game, but this will change later in the game when you reach the Pokémon daycare. By leaving compatible male and female Pokémon with the proprietors, you may later return to find a Pokémon egg. The egg will then hatch into a Pokémon. In most cases, it will be a normal level-5 Pokémon. However, some combinations may yield pre-evolved forms of standard Pokémon, such as the cute pre-Pikachu Pokémon, Pichu. If you're intent on catching all 251 Pokémon, you're going to need to breed for at least six of them.

In addition to the major features and changes noted above, Pokémon GS also boasts a number of minor refinements and gimmicks that further boost the game's comfort and variety. A revamped Pokédex allows you to sort Pokémon by either type or number and also includes a search-by-type feature. If you have a Game Boy printer, you can use the Pokédex to print pictures of the Pokémon you've encountered, or you can visit the GB printer house later in the game to take candid photos. Pokémon GS also sports interactivity with the upcoming Pokémon Pikachu 2 GS, a colorized update to the original black-and-white Pokémon Pikachu virtual pet. The Pokémon Pikachu 2 GS has an infrared port, and by accruing watts with it, you can send mystery gifts to your Pokémon GS game, usually in the form of strong potions or status enhancers.

The only prevailing question is whether or not Pokémon GS is the right game for you. If you've never played Pokémon, you really ought to go out right now and pick up a copy of either Pokémon Gold or Pokémon Silver. If you're a fan of Pokémon, the same goes for you. If you're displeased with the Pokémon phenomenon in general or were only a mild fan of the first games, a cautious look is still highly advised. You really can't go wrong with 251 monsters, two main adventures, countless side quests, and a baseline of 60 hours of gameplay. 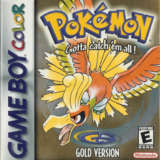