Pokemon is a series that comprises a multitude of titles, the majority of which are actually spin-offs. These spin-offs tend to vary wildly in quality--some of them are exceptionally well done, while others are mediocre, and a few of them are just downright bad. Pokemon Rumble Blast is a follow-up to a rather obscure 2009 WiiWare game, and at first, it seems like it might offer up some mindless fun. Unfortunately, the "fun" part quickly evaporates after a short amount of play, revealing that a game that should be a "blast" is just mindless tedium.

Rumble Blast, like the Pokemon Mystery Dungeon series before it, is based in a world entirely separate from the central Pokemon setting. In this world, Pokemon are sentient tin windup toys. It's a cute idea, and the squat, angular toy Pokemon have a distinct style and charm while still being recognizable. These toys seem to live for combat and spend most of their existence either fighting or preparing to fight in big battles. There's a flimsy story where some malevolent force is trying to steal the healing glowdrops from the various settlements in the world for nefarious purposes, but it's unlikely to hold your interest.

To move the story along, you recruit strong Pokemon to your cause from various locations and then enter competitions and storm enemy strongholds. After you finish these tasks, you unlock a new area with new recruiting locations and a new arena or enemy base. There are a handful of hub towns where you can heal, buy additional skills, and access collection data and multiplayer features, but the core cycle of the game's progression doesn't change much.

The key to success in Pokemon Rumble Blast is recruiting strong Pokemon for your team. Each area in the game has a few locations (meadow, forest, cave, tower, beach, and so on) where specific Pokemon dwell, and you need to visit as many of these locations as possible--some perhaps more than once--to get a sufficient quality and variety of Pokemon. These locations consist of a series of straightforward overhead-view maps where you take on gaggles of Pokemon at once, attempting to knock out as many as possible without getting KO'd yourself. Defeating these foes rewards you with either money or a new member for your team. Each Pokemon you recruit is distinct in its own way, with differing stats and abilities (which will likely remain unchanged for the majority of the game). Even if you recruit two of the same Pokemon, they are likely to have different attacks and strengths. At the end of these linear levels is a big boss Pokemon with a lot of health and strong attacks. Beating these bosses yields both copious amounts of cash and the potential to recruit a high-powered bruiser to your crew. After amassing a sufficiently strong Pokemon army, you can then move on to special story-progressing arenas with slight combat variations like battle royale and team battle. This probably doesn't sound too bad so far, and to its credit, Pokemon Rumble Blast does a good job of replicating the enjoyable collection element of the core Pokemon games.

Unfortunately, that's where the fun ends. The central gameplay of Pokemon Rumble Blast is extremely simplistic: the circle pad/D-pad moves your selected Pokemon around the arena, while A and B perform the attacks the Pokemon comes equipped with (many Pokemon have only an A button attack unless taught an additional skill). There are no super-special attacks, no skillful jumping or dodging maneuvers, and no special items to power you up: you just run around and try to evade attacks being lobbed at you while mashing your own attack buttons. While your attacks have different properties (including classic Pokemon skill types that increase effectiveness against certain foes), once you find something that works well, does a lot of damage, and keeps you a good distance from enemies, you really have no reason to stop using it--until your favorite Pokemon either gets low on health points (or KO'd) or is simply too weak to be effective against the foes in that area. In that case, you simply pick another Pokemon with an effective skill that does a lot of damage and keeps you a good distance from enemies. The game presents an illusion of strategy by offering a huge variety of Pokemon and move types, but there is little incentive to change things up because the best skills are consistently effective on everything. You can even forgo attacking entirely and simply run around all the enemies until you reach the boss, but you won't be getting any stronger teammates that way.

The enemies don't offer much variety, either. They typically approach in groups and lob attacks at you like crazy, and you run to the side or behind them and spew attacks back. This description of combat holds true throughout the whole of Pokemon Rumble Blast. The game's idea of upping the challenge level isn't by giving enemies surprising new twists or abilities; it's by increasing the number of them onscreen at once and raising the amount of damage they can inflict. This leads to some bizarre difficulty spikes in a few areas where the enemies can deal out far more damage than you can, but the challenge lasts only until you recruit a Pokemon that's on equal footing. And don't expect any challenge from the bland, oft-recycled environments--levels are simplistic and linear with little in the way of obstacles or creative design.

The boss fights are particularly inane, because almost all of them follow the exact same structure and pattern: summon small assistants, charge up for a big attack, and then charge up and gain momentary invincibility for a really big attack. You can take down bosses easily by getting out of the way when they charge up and then attacking from the back (preferably with a skill that does multiple hits); this is not a game that requires fast reflexes and thinking. Even the themed fights are completely uninteresting because they simply tack on a few new rules that do nothing to improve the combat's shallowness. It all adds up to a game that starts out mildly fun but quickly degenerates into a boring, button-mashing slog. Multiplayer doesn't alleviate this at all: you can run through the levels with a second player or recruit a helper Pokemon via StreetPass, but this really only serves to make an already easy and dull game even more of a snoozefest.

There are other frustrations, too. One appealing element of the main Pokemon games is the ability to train and raise your favorite Pokemon over time into a superb fighter. In contrast, the Pokemon in Rumble Blast never gain strength in any way. They are designed to be disposable, forgotten as soon as they can no longer pull their weight in combat. You rarely use a Pokemon for more than half an hour before you find one far better--or are forced by sheer enemy strength to use one that's stronger. Pokemon players who have strong feelings for certain critters are likely to be annoyed when their rare and precious Victini can't survive three seconds in the new forest level before being clobbered. You can spend money to teach Pokemon new skills--which are often quite pricey--but given that the Pokemon will eventually become useless anyway, it feels like a complete waste of time and effort.

Perhaps the most egregious element of Pokemon Rumble Blast is just how little it has changed from its WiiWare predecessor. If you're willing to spend some Wii points, you can get the same sort of monotonous, mindless combat as Pokemon Rumble Blast on the Wii for substantially less money, though you won't be getting the newest Pokemon from Black and White or 3D visuals. It's hard to recommend either Pokemon Rumble game, however, when there are so many far superior Pokemon games already on the market. If you need a Pokemon fix, you may as well just go back to Pokemon Black or Pokemon White and completely avoid this sorry scuffle. 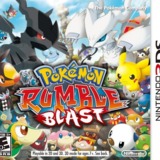