Pokemon Ranger: Shadows of Almia improves upon its predecessor just enough to make it a fun, solid addition to the spin-off series.

Just over two years ago, Pokemon Ranger gave Nintendo DS owners an unorthodox spin on Pokemon with its unique touch-screen capturing controls. It turned out to be an enjoyable game, eschewing the franchise's traditional evolution and "Gotta catch 'em all!" tenets. With Pokemon Ranger: Shadows of Almia, Nintendo gives more of the same, though with a few small but welcome improvements that add a little depth to the experience while keeping its quick pace.

You start out as a fresh-faced student at a ranger school, where you learn about the various aspects of taming and helping Pokemon in the wild. Like in the original Pokemon Ranger, there's no battling here: rangers and students instead strive to keep the peace between Pokemon and humans. You capture the critters as in any other game in the franchise, but in this game you do so by expressing friendly, benevolent feelings through a device known as a styler, and once you use the Pokemons' special abilities to help you, you kindly release them back into the wild. There's no Pokemon leveling up or evolution here. As you progress from student to full-blown ranger, you take on the job of stopping the fiendishly named Team Dim Sun criminal organization from brainwashing Pokemon to do its nefarious bidding. The entire concept sounds a little trite, and many of the story's surprises are predictable, but it's got just enough lighthearted mystery to satisfy a younger audience.

In any case, the real star of Shadows of Almia is its refreshing capture system. The core idea entails drawing a circle around the Pokemon you're attempting to capture. If it bumps into the line you've drawn, it gets destroyed and you have to start drawing again. If its attack hits your line, you take damage. However, where the last game required that you draw a certain number of consecutive circles around a creature (without interruption) in order to succeed, in Shadows of Almia you need to fill up an empty friendship gauge. One complete circle fills up the gauge a little bit, with the catch being that it gradually depletes if you wait too long in between scribble attempts.

These changes make the capture process a bit easier because you're not forced into an all-or-nothing situation, and they also add a hint of strategy. Instead of just scribbling circles as fast as you can, you're now employing an exciting stick-and-move strategy in some of the tougher encounters--lifting your stylus just in time to avoid a series of attacks or catching an especially quick Pokemon when it pauses briefly. Each Pokemon has different attacks and movement patterns (though a number of them are similar) such that almost every new monster encounter brings a unique capture experience and a slight level of intrigue and uncertainty. Save for the large boss encounters, each capture instance can be completed in tens of seconds. Therefore, capturing rarely gets boring thanks to its brisk and varied nature.

Any Pokemon you capture can be used for its special ability during other capture sessions. For instance, you can use a fighting-type Pokemon to enhance your capturing power or a grass-type Pokemon to slow down your target by causing it to sprout foliage. You can also use special abilities on the field as you explore Almia. Like in the last game, the exploring portions are less exciting than capturing, and they employ the same obstacle-clearing mentality. For example, you can't clear a stream without a Pokemon that can swim; if there's a boulder in your way, you'll need a Pokemon with a high-level crush ability to smash it. These parts get progressively intricate and sometimes require a little use of your noggin. But you'll also quickly learn that in many cases, either the Pokemon you need for especially taxing obstacles is close by or a unique-looking Pokemon encountered for the first time will come in handy later in whatever dungeon you're in. This takes away some of the challenge, but at least it saves you some of the frustration of backtracking just for one little critter.

Exploration has changed too: Shadows of Almia includes optional (but highly recommended) side quests. Bystanders will ask you to help find, rescue, or calm down their Pokemon, among other similar tasks. It's nice to take a break from your main Team Dim Sun-thwarting duties to wander around a bit and fill out your catalog of monster encounters, but the quests also offer you the opportunity to meet partner Pokemon--those that never leave your side until you substitute in another partner--and to power up your capture tool with a variety of offensive, defensive, and elemental bonuses. These additions help flesh out the game a bit more, and leveling up your styler might satisfy those who would miss leveling up their Pokemon. The only slightly annoying factor here is that the quests must be taken one at a time, forcing you to backtrack to clients before taking on new quests instead of just queuing up quests as you encounter them.

The world of Almia is presented with vivid 2D graphics and large detailed sprites. Each area you travel to has a distinct feel, with colors that pop off the screen and its own collection of inhabitants. Though this variety is primarily due to the predictable use of lava, snow, desert, and underwater environments, the world is no less pleasing to the eye. What should have been improved upon are the Pokemon calls that you hear whenever you pass by them. They reek of 8-bit audio, and hearing a Ninetails or Shieldon in this game roar at you is incredibly grating, though not in the intimidating way a roar should be.

Nintendo hasn't made sweeping improvements on the original Pokemon Ranger, which is a slight disappointment given the two-year gap between entries. All told, however, the improvements do make for a more complete experience overall that provides the same invigorating mechanics introduced in the first game. With a meaty adventure that could easily take you past 25 hours, the return of downloadable side quests thanks to the Nintendo Wi-Fi Connection, and the same core that made the original game so refreshing, Pokemon Ranger: Shadows of Almia is a worthy addition to the series. 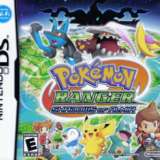 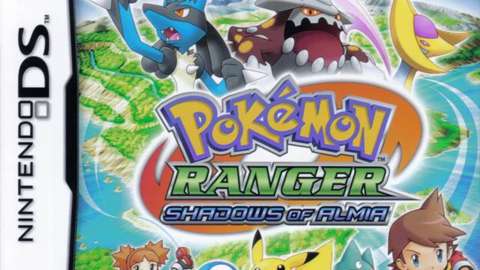 Play as a Pokemon Ranger, working to help people, Pokemon and nature in a new area called the Almia Region.

8.1
Sign In to rate Pokemon Ranger: Shadows of Almia