Pokémon Ranger has a similar look and feel to all the other lighthearted Pokémon games, but invites you to capture all those critters in a rather exciting new way.

You'll really get to put the Nintendo DS touch screen to good use in Pokémon Ranger, a spin-off of the popular series that requires a very hands-on approach to capture all those hundreds of different pocket monsters. Though the game retains some of the same role-playing elements as the traditional Pokémon titles, rather than facing off against the critters in turn-based battles, you'll instead have to ensnare them by drawing circles around them as they skitter about the screen. This turns out to be more interesting and challenging than it initially appears. Pokémon Ranger's unique touch-screen controls, good-sized quest, and bright, colorful 2D graphics add up to a solid game.

In the game, you play as a boy or girl who dreams of becoming a Pokémon ranger and is lucky enough to get recruited into the ranks of a noble organization devoted to preserving the peaceful harmony between people and Pokémon. As a new recruit, you're given a "styler," a device that may be used to pacify agitated Pokémon and temporarily recruit the critters to your cause. Initially, you'll undertake a series of menial missions as you learn the ropes. But all the while, you'll be hearing about the no-good Go-Rock Squad, a rival organization looking to exploit the powers of the Pokémon using devices similar to the rangers' own stylers. Sure enough, you'll get caught up in the rangers' efforts to get rid of these self-satisfied villains. Pokémon Ranger is mostly linear as you move from one major mission to the next, though as in just about any Pokémon game, there's more to do and more Pokémon to find even after you've finished the main quest. The lighthearted story has a few amusing bits in it, but it's fairly predictable for the series.

As you accomplish missions and rise in rank among the rangers, you'll grow more powerful, allowing you to run around with a bigger posse of Pokémon followers and use their special abilities more frequently. The game's combat--if you can even call it that--is pretty unusual. When you run into an untamed Pokémon out in the field, a capturing minigame ensues as the Pokémon starts running around onscreen. At this point, you can draw on the DS touch screen, and each time you form an uninterrupted circle around the Pokémon, you come closer to capturing and taming it. Some Pokémon can be captured with just a couple of loops, while other, stronger ones will require more than a dozen. Sometimes you'll face several Pokémon at once. This can be such an intense endeavor that you may find yourself scribbling the heck out of the DS touch screen, possibly scratching it in the process. It's nothing that can't be avoided if you don't press down too hard, but there aren't many DS games out there that require such extensive and continuous use of the touch screen.

As you attempt a capture, the Pokémon will often try to attack or bump into the capture line. If this happens, the line breaks and the capture attempt fails, forcing you to try again. Since the capture line vanishes each time you complete a loop, the strategy becomes having to quickly draw loops around a Pokémon when it isn't attacking, which is easier said than done against some of the bigger, tougher breeds. Their attacks against the capture line deplete your energy, and should the styler run out of energy, it's game over. Your energy reserves increase as you level up by capturing more and more Pokémon, just like your health points do in a typical role-playing game. And, just like a typical role-playing game, Pokémon Ranger starts off easy but the challenge noticeably ramps up. Initially the capture process is almost mindlessly simple, as you can quickly swirl around most Pokémon types to capture them in seconds. But some of the captures further on in the story will require patience and skill.

This is one of those games that are deceptively easy at first. Thanks to the variety of Pokémon (it's not the most of any Pokémon game, but there are around 200 different breeds), the capture process stays interesting. The same can't necessarily be said of the field-exploration sequences, most of which boil down to some pretty basic dungeon crawls with a whole bunch of thinly veiled key hunts in them. You'll often need to capture a certain type of Pokémon to proceed further into an area. Some Pokémon can cut through gates or wire fences, others can crush rocks, others can swing you across ravines, and so on, but all of this boils down to you getting some sort of obstacle out of your way. The level design of the different mission areas isn't bad, but isn't particularly imaginative, either. In between the game's equivalent of dungeon crawls, you'll get to explore a few towns and may undertake some optional capture challenges, which entice you to capture as many wild Pokémon as possible in a few minutes' time.

Though you'll travel with a partner character at times, Pokémon Ranger is a single-player game that gets most of its lasting value from offering up a reasonably lengthy quest that spans 15 hours or so. Beyond that, some extra missions and the underlying goal of finding every last Pokémon could keep you going for a while longer. All throughout, Pokémon Ranger features a bright, attractive visual style that does a fine job of bringing all the different Pokémon critters to life. There aren't any 3D graphics here, but the 2D characters are nicely drawn and animated, and the Pokémon themselves are shown to scale, which means that a massive charizard appears much bigger onscreen than a tiny pikachu. Since the traditional Pokémon games use static images for all of the creatures, it's great to see them actually moving this time around, using their various special abilities to breathe fire, spout electricity, spew poison gas, and much more. The creatures all have a unique call, but these unimpressive sound effects seem lifted straight from the Game Boy era. The rest of the audio is pretty standard, including the upbeat music that sets the tone and pace of the game.

Pokémon Ranger is more than a one-trick pony, because the process of capturing different Pokémon has some variety and strategy to it. This still isn't as deep or involving of a role-playing experience as some of the other Pokémon games, though, because you don't get to level up the different Pokémon directly. In fact, you don't even get the sense that you're keeping all of the Pokémon you're capturing, as you promptly let them back into the wild once you use one of their special abilities. This means Pokémon Ranger doesn't give you that same sense that you're building up a huge collection of creatures, even though you still log the data for each breed you successfully capture. And at any rate, the whole theme of the game is different; you're cast as more of a nature-loving peacekeeper, as opposed to an animal trainer. But the result is another original Pokémon game with plenty of challenge, a unique spin, and an underlying "be good to the environment" message that both kids and grown-ups should be able to appreciate. 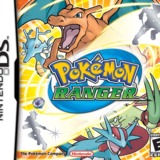