It's as cute as a button, but dull, simplistic dungeon exploration drags Gates to Infinity into mediocrity.

The genre of game known as "roguelike" has traditionally been something of a tough sell to the mass market. Typical elements of these games, such as procedurally generated areas and the loss of valuable items and experience upon (often quite common) death, tend to turn off players who view them as too punishing. The Pokemon Mystery Dungeon series has been an anomaly in the genre: it retains a few key genre features, does away with a lot of the usual stress and penalties, and is all dressed up in a cute and cuddly Pokemon theme. However, as demonstrated by the newest installment, Pokemon Mystery Dungeon: Gates to Infinity, toning down what makes a genre distinct can rob it of its appeal.

Pokemon Mystery Dungeon: Gates to Infinity begins with you, the player, having awoken from a nightmare. That's not the only shock: you've been mysteriously transformed into a Pokemon and sent to a world where humans don't exist. When you meet another Pokemon companion (you select both your own Pokemon type and your companion's from five different options), you make fast friends and agree to help them achieve their goal of building a paradise for Pokemon. But that lofty goal is even tougher than it seems: the peaceful Pokemon societies have become corrupted by greed and violence. You and your pal can help restore order, however, by acting as freelance do-gooders: exploring strange mystery dungeons and completing requests to earn respect and rewards from your fellow Pokemon.

It's quite charming to see the Pokemon interact and speak directly with each other, which doesn't happen in the main games. But for such a simplistic premise and story, it is exceptionally wordy, and because there's no way to skip dialogue or increase the text speed, the story sequences transform from cute diversions to annoying barriers keeping you away from the rest of the game.

Not that the rest of the game is particularly great. When you aren't listening to various Pokemon woes, you're exploring randomly generated mystery dungeons to accomplish various missions, both mandatory and optional. By completing these dungeons, you're rewarded with items and the loot you collected. Some of these items can be used as material to clear land and build new facilities for your Pokemon paradise. The upgrading and expansion of your commune is the high point of the game: it's satisfying to watch your town grow from a wasteland to a bustling hub of Pokemon activity. The problem is that this is a small portion of the game compared to the story scenes and dungeon exploration.

In fact, it's the dungeon exploration that drags the game down more than anything else. While the dungeons are rooted in genre traditions of the roguelike--multi-floor structures of mostly randomly generated layouts, enemies, and loot--they strip away much of the danger, challenge, and thrill that make that sort of game compelling, leaving Gates to Infinity feeling like a dreadfully dull husk of a much better title. Dungeons are pretty but samey-looking, with nondescript backgrounds and floors often devoid of treasures that compel you to explore and put yourself at risk, but with plenty of generally easy enemies to impede your progress. Traps and hazards are also sparse, taking away the thrill of exploration and the strategy of using them against your foes. A hallmark of the roguelike is the danger and risk inherent in every step and action you take, as is using limited resources cleverly for survival. Pokemon Mystery Dungeon doesn't entirely remove these elements, but deemphasizes them to the point where the game becomes simplistic and boring. Some dungeons try to spice things up by implementing incredibly basic puzzles, but these do little to break up the monotony.

Combat, at least, is a bit more involved. As in the core Pokemon games, each creature has four different commands to use when fighting foes. Skills have limited usage, so you can't expect to repeatedly use effective techniques without eventually running short and needing to use restoration items. Each skill levels up independently, meaning that more frequently used techniques grow more powerful over time. Levels of Pokemon and skills carry over between dungeons, instead of resetting as they often do in other roguelikes.

After defeating them, you can also recruit new Pokemon to join your party, and take up to three CPU-controlled helpers with you in each dungeon. This makes the already diluted gameplay even simpler, because you can use a companion as an easy shield if you wind up in even the slightest bit of danger. This mechanic introduces its own set of annoyances, however: CPU companions set to attack tend to spam the most limited techniques like they're going out of style, wasting valuable uses on otherwise easy foes. You can also give basic generalized commands to your CPU companions that enable them to split up and explore on their own, which they also occasionally manage to do independently. If any one of them gets defeated (and they often do, typically by otherwise ridiculously weak, unseen foes), it counts as a defeat for everyone; it's either give up or set a StreetPass signal and hope somebody you walk by rescues you. If you give up, you lose some, but not all, of the items and funds you're carrying. It's frustrating to have an otherwise easy dungeon trek ruined by a Pokemon pal who wanders off and gets into trouble.

One of the better features of the game isn't even in the main game itself. The extraneous Magnagate AR feature lets you randomly generate a completely original dungeon using a picture of a circular object snapped with the 3DS's built-in camera. These dungeons tend to be more complex and challenging than those in the main game, featuring better (and more frequent) loot, tougher enemies, and more interesting Pokemon companions (along with the elimination of the "one falls and everyone fails" rule). These dungeons give high-quality items that can be transferred to the main game or stored for later re-exploration. But despite their relative improvement in quality, these dungeons are still pretty dull overall.

Pokemon Mystery Dungeon: Gates to Infinity sits firmly in mediocrity: it's not poorly made and designed, but it fails to deliver much excitement or fun. It's also not clear just who this game's target audience is: the controls and mechanics are a bit too complex and confusing for younger players, but they're far too stripped and simplistic for older genre fans. What results is a game that ultimately isn't quite right for anyone. 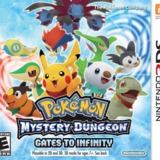