If you ever thought it would be cool to hang out with Pikachu, think again.

Pokémon Channel is the latest entry in Nintendo's long-running series of games based on the popular anime franchise that has been going strong since the first game hit the original Game Boy in the late '90s. Since then, the series has seen a variety of entries on the Game Boy Platform, along with appearances on Nintendo's home consoles. Whereas the handheld titles have proved to be addictive and inventive games in their own rights, the home console titles have usually fallen short of the high standards set by the Game Boy games. This, unfortunately, holds true for Pokémon Channel, a loosely defined game that has you hanging out with Pokémon poster boy Pikachu. While there are some interesting elements to the game, it's ultimately undone by poor execution that ends up bringing down the whole experience. So, if you ever thought it would be cool to hang out with Pikachu, think again.

The game's premise is simple. You serve as a virtual Nielsen family to help Professor Oak focus-test the Pokémon Channel, a new network that airs programs aimed at Pokémon. Your main task is to watch the various television programs on the network and report back with your findings. Oak becomes especially interested in your feedback when, shortly after a pack of Magnemites deliver your television, a wild Pikachu shows up at the door to your pad. Quicker than you can say "home invasion," Pikachu makes himself at home and becomes fascinated with your television, at which point the little guy becomes a permanent fixture in your pad. Since you're now sharing space with one of Oak's intended audience, the canny professor urges you to watch television with your new friend so you can provide feedback.

The gossamer-thin premise suits the equally lean gameplay quite well. The core of your experience in the game revolves around watching television with Pikachu. You'll initially find a small number of channels selectable when you first start the game, with the centerpiece being the anime channel that features the first part of an episode of Pichu Bros. As you progress through the game, you'll open up the other parts, and you'll eventually be able to watch the whole thing through. The other channels feature themed shows that are hosted by familiar faces in the Pokémon universe. Squirtle is host of the shopping channel, Psyduck anchors the local news (which features on-the-scene interviews by Meowth), Smoochum leads you through exercises on the fitness channel, Wobuffet is the host of the quiz channel show, Smeargle waxes poetic on the arts in his show, and Slowbro keeps you up-to-date on weather, to name just a few.

The game uses the GameCube's internal clock to track when you play. There are three basic times of day in the game--morning, afternoon, and night--which affect when you can access programs. You access new shows by watching all the channels you have available to you at a given time, and you interact with them if possible. Following this, you submit a detailed account to Professor Oak on the report channel.

You have limited interaction with some of the shows, most notably Quiz Wobuffet, which quizzes you on Pokémon trivia, and Shop Squirtle, where you can buy items by touching the television screen to input answers or shopping orders. Both shows are tied to each other in that you earn cash (called Poké) on the quiz show that you can use to buy stuff on the shopping channel. Shopping is another large part of the game experience, as is collecting items. You're able to buy a number of different items, including new TVs, posters, dolls, and Pokémon Mini games. In fact, you find one of the handheld units in your room with Snorlax's Lunch Time, and you're able to get several more. You're also able to collect "Nice" cards, which are virtual trading cards that you collect in your binder as you go through the game. They come in normal, motion, and platinum varieties. Normal cards have a Pokémon's picture on them, motion cards are virtual lenticular cards that simulate motion when tilted, and platinum cards are upgraded motion cards that also offer up a sound sample of the featured Pokémon's signature cry. Finally, you're able to collect special items, such as a pass that lets you ride the local bus to visit new locales.

You're also able to interact with the programs in another way, via a paint program triggered by a Smeargle doll you receive early on in the game. If you click on the doll while watching any parts of the Pichu Bros. cartoon, the program captures a still image in black and white, which you can color. Once you're satisfied with your creation, you can name it and display it in your room. While you can only display one work of art, you can have the others auctioned off to earn Poké. In a nice bit of synergy, you'll see your artwork critiqued by Smeargle, on his television show, as you progress through the game. The paint program also features e-Reader support, which allows you to upload more images into the game for you to paint. The game comes with three e-Cards that you can use to get your budding art career started.

Pokémon Channel uses a simple first-person perspective--with a hand-shaped pointer that you can use to interact with your environment--as your primary interface. Your ability to interact with your surroundings is pretty limited. You can turn your TV on and off, and you can switch channels by using your pointer to press the buttons or by using your GameCube controller, which has the on/off and channel-changing functions mapped to it. When watching TV, you can choose to zoom and have the program take up the whole screen, or you can pull back slightly, which lets you see Pikachu's reactions to the programming. You're also able to interact with various items in your room. You can interact with Pikachu by calling him and having him investigate objects in your room. In some cases, having Pikachu check out objects rewards you with collectible items.

Additionally, you're also able to leave the confines of your room--if Pikachu will let you--so that you can explore your front and backyards. Both areas feature appearances by assorted pokémon, who vary depending on the time of day. You have limited interaction with everything to one degree or another. In the backyard, you can have Pikachu eat fruit, talk to wild pokémon, and tend to a garden. In the front yard, you can talk to wild pokémon and can eventually catch a bus to see some new sights--once you've gotten the right pass. New areas also offer some minigames that you can engage in, like fishing. There are also new wild pokémon to talk to. Talking to wild pokémon usually triggers an impromptu quiz that rewards you with a Nice card if you answer correctly. Unfortunately, given that you're usually tied to watching television, you won't be getting out and about as often as you'd like.

The game's graphics are decent but unspectacular. All the pokémon are nicely done in 3D and feature distinct animations that suit their personalities. Pikachu is naturally the best-looking of the lot and has an expressive face and a varied assortment of animation. The environments you explore look fine and offer clean detail that doesn't push the GameCube hardware at all. There's a nice bit of technical flashiness to the various television programs in that you can zoom in and out of them on the fly without affecting playback, which is cool. The video quality of the Pichu Bros. episode is good. The Pokémon Mini games offer the same zoom-in-and-out option that's a nice touch as well.

Audio in Pokémon Channel is sparse and sometimes annoying, thanks to the signature cries of the menagerie of pokémon. You'll hear some catchy music in the assorted programs, but it starts to grate after some of the mandatory repeated viewings you'll have to endure. The various sound effects in the game are fine but minimal. This sadly puts the weight of the audio burden on the pokémon voices, which, while accurate, are naturally repetitive.

Overall, Pokémon Channel has some interesting ideas, such as going around and interacting with wild pokémon in a 3D world and having the GameCube clock affect gameplay, for example. Fundamentally, they're hampered by the gimmick of having to "virtually" watch television programs. There's some nice content in here for fans of the franchise, as there are quite a few pokémon to be found in the game. Furthermore, there are a ton of items to collect, and there's even some replay value, but it's a chore to get to because of the limited gameplay. Although clearly aimed at children, the game fails to offer a very compelling experience for younger gamers due to the long stretches of time you spend being forced to watch the programs in order to progress further. Ultimately, Pokémon Channel fails to capture the addictive and inventive appeal of its handheld predecessors due to weak gameplay, bland visuals, and sparse sound. 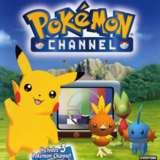