Fans of Point Blank will certainly not be disappointed, and those who thought Point Blank was a bit too remedial will probably be right at home.

The Japanese version of Namco's Point Blank 2, GunBarl, came out overseas about nine months ago - just months after the US release of the original game, Point Blank (or Gun Bullet, as it was called in arcades and in Japan). Now Point Blank 2, the shoot-'em-up puzzle sequel has arrived in the States. The game, like its Japanese counterpart, is not an arcade port, but rather a console-specific game geared expressly to the home audience. How does it fare? Very well indeed.

Point Blank 2 is a toughened up a step beyond the Japanese version, yet it includes the same modes, such as a theme-park mode in place of the RPG-like storyline of the first game. There's also a party mode with a two-to-four-player tournament, a team battle, a really fun turf war, and the Point Blank Castle, which includes versus and endurance modes. Theoretically, in single-player and multiplayer modes, you have the same sort of timed "target" challenges that the first game offered. These challenges test your ability to shoot straight and often in rapid succession, with limited time, ammo, or both. In single player, you can start off with a training mode that recommends the next stage you should try - depending on how well you do, of course. The practice levels are painfully easy and often suggest you go to an advanced round next, but then the advanced levels will beat you soundly and suggest you go back to beginner. As in the Japanese game, the practice level has four rounds, and the beginner and advanced levels each have 16. And as an added bonus, a new "insane" level has been thrown in to up the ante. Once you complete a stage, you receive stats that track your progress, from accuracy to speed of firing. The trick is to make it through all of the courses, finishing each successfully. Also in single player, the theme park mode is much more enjoyable than Point Blank Island was in the first game. As the hero (a young kid with a big gun) in theme-park mode, you must search the park for the king's daughter and clear all the stages before you can complete the level. As in the first game, the puzzles in this mode are similar to puzzles in the multiplayer and single-player modes, but with a bit more diversity in their delivery.

Overall, the stages in Point Blank 2 exhibit a greater degree of depth than the original game did. For example, instead of just clearing the bad guys and saving the good guys, you now have bottles sprinkled throughout the level to grab for extra points. Also, the bad guys don't just dress the sidewalks, porches, and hallways; now they actually ride by you in buses and truck beds. You get to shoot out the glass of the vehicles before capping the bandit! Clever new puzzles such as one in which you shoot the cork off a champagne bottle and defuse a time bomb make you wonder if the developers had concocted these puzzles by sitting on lawn chairs on their back porches with their BB guns. The vandal levels have expanded as well. Now you shoot out neon signs in Tokyo and destroy a house and tractor with rapid fire. You'll even shear sheep with a gun. Pretty slick. But the list of new stages goes on and on (between the original version and the Japanese version of the sequel as well), and they're all just as fun, if not more fun, than the original. One thing to note - besides having a greater degree of depth, Point Blank 2 is also considerably more difficult than Point Blank.As expected, the multiplayer mode is even better. This time, you can challenge other players in real-time one-on-one battles. You'll have races to destroy the targets or shear the same herd of sheep. Another multiplayer stage finds you knocking off vultures so your character can beat your opponent's character to the mountaintop.

The tournament mode is essentially a larger, more focused head-to-head mode, but the team play is quite fun. However, the best new mode has to be the turf war. Up to four players battle for blocks on a layout of a couple dozen squares. The player with the most squares in the end wins. You earn squares by selecting an opponent's square and challenging that person to a match. The puzzles you play here are the same puzzles you play throughout the various modes in the game.

Graphically, Point Blank 2 is a bit better than Point Blank, and the music is slightly improved as well, offering less of a Casio keyboard sound and more of what could be more aptly referred to as "penguin techno," although it seems that some of the same tunes have returned, and they haven't evolved in the least.

The Point Blank 2 challenges have greater depth, they are more difficult, and, in part, they are more sophisticated - you'll rely less on your reflexes and more on hard-core hand-eye coordination and your brain - at one point you'll have to complete math problems and shoot the correct answers. This game is just as addictive as Point Blank, yet it has greater difficulty and strategy elements, along with the new modes, making the experience one step beyond mesmerizing and quite an authentic challenge. Fans of Point Blank will certainly not be disappointed, and those who thought Point Blank was a bit too remedial will probably feel right at home. 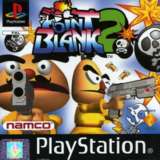 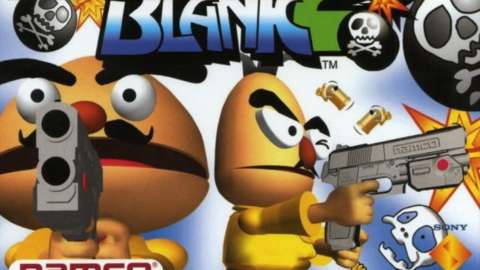 Fans of Point Blank will certainly not be disappointed, and those who thought Point Blank was a bit too remedial will probably be right at home.