"Once upon a time, there was an evil ghost. He did many nasty things, so a goddess had to keep him prisoner. However, a hundred years later, the evil ghost escaped." This is a word-for-word transcription of the introduction you see when you first play Pocky & Rocky with Becky. It's a cute-looking shooter, but as the plot suggests, it is also extremely simplistic.

Pocky & Rocky with Becky has a lot in common with the space shooters you can find in arcades. All of the action in the game's seven levels occurs on the ground, but enemies fly toward you from all directions, and their bullets have a tendency to pass right over solid objects such as trees and boulders. You have to walk from the beginning of a level to the end while navigating the maze of trees, rivers, and walls that stand in your way. These objects won't hurt you, but the ghosts and their bullets will, so you also need to shoot back at them and repel their attacks. As the title suggests, there are three characters to choose from. They differ in looks, especially Rocky, who is a raccoon, but their attacks are pretty much identical. The main difference between the characters is their unique power-up items: Rocky can equip a shot that seeks out enemies, Pocky has a special shot that explodes when it touches an enemy, and Becky's special attack fires in multiple directions.

The letdown comes when you start playing through the levels and you discover that the only good strategy is to just race right through them. All of the characters have an attack that enables them to deflect enemy bullets, but it's much more effective to avoid combat altogether, grab the key, and fight the boss at the end of the stage. The stages themselves are also terribly brief. Some of them are barely 10 screen lengths in size. Along the way, there are three different power-up items you can collect by attacking enemies or swatting lanterns. These include the character-specific items mentioned above as well as a flame shot that's doubly powerful and a range shot that travels twice the distance of your normal bullets. You also get a single bomb attack that you can use once per stage to clear the screen of enemies.

Surprisingly, while the levels themselves are quick and somewhat easy, boss battles are altogether cruel. They'll get plenty of cheap hits with their attacks, and you can't repel their shots or use your bomb ability against them. The collision detection is fairly unpredictable here as well, so you won't always hit a boss even when your shots are supposedly plunking them in the head. You get only three lives, so you can expect to scamper through a stage countless times until you figure out the pattern and weakness of each boss. Thankfully, the North American version of the game includes a health feature that lets you take two hits before losing a life. In the Japanese version you perish after a single hit.

Although the graphics and audio seek to give the game a cute personality, they don't really succeed any better than the levels at making a good impression. The character sprites look like cartoons, and the enemies don't seem menacing at all, which isn't necessarily a negative, but they don't move very much either. The backgrounds are also quite plain. There are moments when you'll see a fog or rain effect superimposed over them, but they don't exhibit the kind of detail you've come to expect, such as shimmering water or flickering torches. In the same vein, the music is bouncy and the sound effects are crisp, but there isn't much variety at all.

Pocky & Rocky with Becky will certainly appeal to shooter fanatics who want a simple and challenging game. Unfortunately, the overall product is so underdeveloped and the quest is so short that most casual players will feel shortchanged. 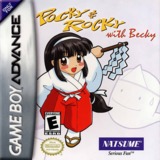 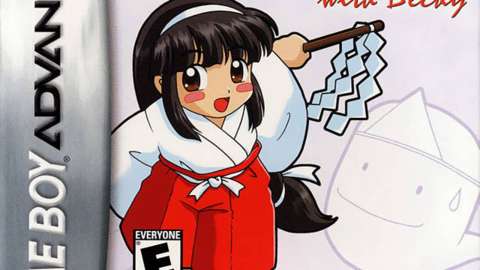