Not only does Pocket Pool miserably fail to deliver an enjoyable game of billiards, but its attempts at titillation are more depressing than anything else.

It's going to take a certain kind of self-hating individual to wring any drop of enjoyment out of Eidos' Pocket Pool. Let's start with the basics. For one, as a portable pool game, Pocket Pool is terribly underwhelming. It's got several variations of the game, to be sure, but its mechanics and physics are so wonky and unpleasant that any potential gameplay enjoyment is quickly squashed. But let's say you're the masochistic type and are willing to suffer through any amount of bad gameplay to get to what Pocket Pool's purported prize is: photos and videos of sexy models. Fine, sure, why not? Here's why not: The unlockables happen to be complete garbage. These are cut-rate models gyrating and posing in such utterly boring fashion as to make early-'90s swimsuit calendar videos look like Larry Flynt concoctions in comparison. Suffice it to say, Pocket Pool has about zero going for it in any category.

Just in case that wasn't enough to scare you off, let's go a little deeper. Pocket Pool is innocuous enough on boot up. When you start a game, you're presented with several pool variations, such as 8-ball, 9-ball, 15-ball, rotation, snooker, and the like. You then get to mess with some options, such as the location you're going to play in, table type, cue type, ball set (none of these matter, as they're all generic and ugly), and ball speed. Ball speed is the one you're really going to want to pay attention to. The default option is slow, and on this setting, balls feel overly heavy and don't get much bounce at all. The high setting turns them into ping pong balls and has them flying all over the place. The medium setting is the only playable one (and since there's no savable options menu, you're going to have to manually select it each and every time you play--which, hopefully, is exactly zero times), but even it doesn't feel quite right. Balls on this setting still have a tendency to feel overly heavy and not bounce quite enough to be realistic. Breaks, for instance, don't break up the rack nearly as much as they should, even when you ramp up your shot power all the way. The on-the-table action just never feels quite right as you play, and it often leads to your missing all but the most straightforward shots.

The game's control scheme doesn't offer up many surprises. Unlike some games, which have used the analog stick to measure power or wind up for a shot, Pocket Pool uses a basic power meter that you can bring up by holding down the circle button. You just press up on the D pad until you get the power you want, then press right on the D pad to take your shot. Cue movement is relegated to the D pad as well, so you may find getting more subtle angles on shots frustrating, as the movement tends to be a bit stiff compared with games that use the analog stick for this sort of thing. You can adjust a few things like spin and angle, but you'll rarely need to use these mechanics except for very late in games. There's an aim assist feature that shows exactly where the cue ball will connect with a specific ball, but it doesn't give any hints as to where the ball you're hitting might end up, so it's not especially helpful. There are camera angles to play with, but the only useful one is the standard first-person perspective, as most of the other angles don't give you much perspective on where a shot might actually end up, and the overhead view is too zoomed out to let you figure out proper angles.

Computer opponents are perhaps the oddest thing in the game. There are a variety of characters to play as and play against, most of which are headshots of some of the models in the game (though, weirdly enough, there are some guys to pick from as well). All have text profiles that are funny for all the wrong reasons, and all come at you with some appropriately awful banter as you're playing. However, the really odd thing is the unpredictability of the artificial intelligence. There are some matches in which computer opponents will forget what game they're playing and miss on a constant basis, and there are some in which they'll start channeling Jeanette Lee and making the most patently ridiculous bank shots you will ever see. There's little rhyme or reason as to how this will go, except that it seems like the AI is better at certain pool variations than others. Basic pool and 8- and 9-ball seem to be strengths, whereas snooker variations appear to be weaknesses. Regardless, the AI is either too overwrought or too brain-dead to be any fun to play against either way. You do have the option to play ad hoc against a friend, but subjecting anyone else to the lousy presentation and clunky physics of Pocket Pool is a good way to lose a friend.

There's no real structure to Pocket Pool. You just keep playing games, and every time you win, something new unlocks, be it a new table, a new ball set, or some new gallery items. Gallery items are presumably why you'd be interested in this game in the first place, but sadly, they're not interesting at all. These are cheap, lazily produced photos and videos of trashy models that are roughly as sexy as anything you'll find on basic cable past 10 p.m. Heck, remember The Guy Game? That game had basically the same idea, and at least its cheesy gameplay actually worked as intended. 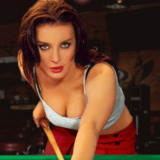