Are those two fighters really smoking opium in that igloo?

OK, let's see if I can explain this without losing my mind. Capcom took characters from its various fighting games and put them in a puzzle game, called Super Puzzle Fighter II Turbo. The game was, at its core, a Puyo Puyo clone, except little super deformed versions of the Street Fighters fought it out in the middle of the screen. This was done purely for effect, as their fighting didn't really impact the gameplay at all. Now, Capcom has taken the midget fighters out of the puzzle game and put them back into a fighting game. The gems from Puzzle Fighter show up, as well. The result is a fighting game that is so sickeningly basic and painstakingly derivative that even Capcom diehards should stay away.

The familiar six-button fighting game control has been ditched in favor of a three-button system. One button punches, one kicks, and one does a special, unblockable attack. The game's special moves are powered by the gems from Puzzle Fighter, which fly everywhere on every hit. Special moves have three levels, depending on how many gems you have. For instance, a level one fireball will only hit once, but a level three will hit three times and set your enemy on fire. Along with picking up gems, you can also pick up small globes. There are fire globes, ice globes, stone globes, and more. Tossing these globes at your opponents will either hurt or stun them, depending on which globe you have.

The graphics are well done, although the style of the artwork is open to debate. Do we really want goofy-looking squashed fighters? Do we really want combos that cause the characters to change outfits? Do we mind that the costume combos are much more apparent on the female characters? Are those two fighters really smoking opium in that igloo? Who exactly is Capcom making this game for? Sick fighting game fantasies aside, the characters and backgrounds look nice and animate well. The backgrounds contain a good number of characters from the Street Fighter universe. In one scene, you'll see Dee Jay tending bar, Honda ordering a drink, and Guile and Charlie yakking it up at a back table. The music fits the game, consisting mostly of happier remixes of existing tunes from other Capcom fighters.

The game also contains a create-a-fighter mode. The game asks you a lot of different questions and gives you a character based on your tastes. You then send this character into battle, where it earns cards for winning fights. While it may sound a bit like Monster Rancher, it's far too basic to be interesting.

Capcom made the fighting genre what it is today, but this game is yet another blemish on Capcom's rapidly declining record. If you really feel the need to see Chun-Li dressed up as a cheerleader, then this game is right up your alley. But then, perhaps a psychiatric evaluation would be time better spent. 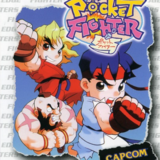 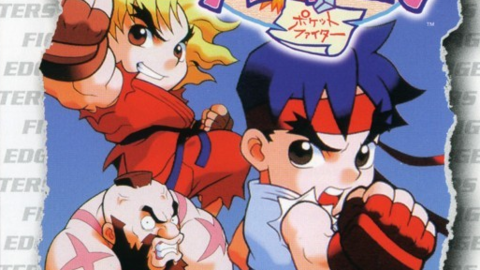 Are those two fighters really smoking opium in that igloo?