It's easy to be cynical about a game that borrows so heavily from a well-loved franchise. And there's no question that, on the surface at least, PlayStation All-Stars Battle Royale bears more than a striking resemblance to Nintendo's Super Smash Bros. But this is a game where appearances can be deceptive. Underneath its collection of classic (and not so classic) characters, four-player battles, and tongue-in-cheek franchise mash-ups lies a fighter that eschews button mashing and over-the-top special moves for a deeper, more technical fighting experience.

That's not to say it's a better fighting experience because of it, though. There are three attack buttons to choose from--which don't directly correspond to punches, kicks, or the power of an attack--and each of them can be modified by using the D-pad or analogue stick. That already gives you quite the combination of moves to choose from, but the game layers on more complexity with jumps, throws, blocks, rolls, dodges, taunts, items, and super moves. The sheer number of attack options available to you can be overwhelming, particularly during a heated battle.

It's a complex system that stands in stark contrast to the game's eclectic collection of characters and cute, colourful arenas. But it mostly works--if you're willing to put in the practice. Button mashing isn't an option--at least if you want to win a fight--and you won't see the kind of outlandish, high-energy effects and special moves typical of other team-based fighters like Marvel vs. Capcom. In some respects that's a disappointment, but your pugilistic powers do leave room for more strategic forms of combat.

Making sense of that strategy with well-timed punches, kicks, and throws, particularly amid the chaos of four-player fights, is where the challenge in Battle Royale lies. Getting a grasp on things is made all the more difficult by each character having a unique way of handling, to the point where learning to fight with one character rarely translates across to another. Kratos, for instance, moves and attacks much like he does in God of War, flinging his Blades of Athena around with a brute force that results in some slick, impressive-looking combos.

But someone like Parappa the Rapper is a trickier proposition. Chaining his moves together requires more delicate timing, and demands multiple directional commands to execute uppercuts and sweeps or to wield his skateboard to fling opponents into the air. The unnervingly cute Toro (Sony's official mascot in Japan) can change clothing during a match to switch from a karate champ to a ninja to a helmet-wearing hothead, and each outfit completely changes the types of moves he can perform.

Such complexity means that, at least initially, the only way to succeed is to try to master a single character. And even when you do it's disappointing to find that the game never reaches the silky-smooth, fluid heights of a truly great fighting game; there's simply a lack of finesse in how the characters handle, how their abilities are balanced against each other, and how their punches meet that makes for unsatisfying combat. Numerous tutorials that cover everything from basic kicks and punches to full-on combos and combat trials that put those skills to the test certainly help make sense of Battle Royale's technicalities, but never to the point where you can overcome how stilted everything feels.

There are other idiosyncrasies to contend with too. For starters there are no health bars; matches are instead won by racking up kills, either to a set goal or by simply getting as many as possible within a time limit. The only way to get kills is by building up your AP (power) meter via combos and unleashing super moves: the higher your AP, the more powerful the move. It's an interesting twist on fighting game mechanics, and changes how you approach battles.

Without the constant pressure of a health bar, you can be more reckless and go on an all out attack without fear of reprisal, especially at the beginning of fights when AP is low. When everyone's AP Is higher, and special attacks are ready, it's wiser to take a more cautionary approach. But even then the game never really approaches the sort of tension levels you might expect from a fighting game. There's none of those last second, down to the last of your health bar moments that are so tense, and so appealing.

Like the rest of the combat, gathering AP for special moves is tricky. Each character handles differently, going beyond simple differences of short, medium, or long-range attacks. Some level one supers can be interrupted with attacks and throws; others can't. Most level two supers can be countered only with other supers. Some level three supers kill everyone onscreen, without any input from you, while others require you to hunt down your opponents. Suffice it to say, the learning curve is steep.

There is, however, a certain charm to it all. Much of that is down to the game's eclectic collection of characters and some inventive and often amusing level design. Classic Sony characters like Sly Cooper, Parappa the Rapper, and Sir Daniel sit alongside more modern creations such as Nathan Drake, Sackboy, and Fat Princess. And, let's face it, because Sony doesn't have quite enough loveable characters to make up a full fighting roster, there are third-party inclusions too, like Big Daddy, Dante, and Raiden.

And then there are the gorgeous arenas. The bright, colourful dojo from Parappa the Rapper--complete with pointers from Master Onion--is a delightful nostalgia trip that takes a bizarre turn as the dojo's walls crumble, a city is revealed, and giant robots fire rockets at the combatants. Indeed, many of the arenas contain obstacles for you to avoid while fighting. For instance, the Little Big Planet level is in a constant state of construction, and platforms appear and disappear often. That's tricky enough to work around when you're trying to land a few punches, but the platforms soon fall altogether to reveal quizmaster Buzz, who poses a question that you must answer by standing in the appropriate area of the screen. Mess it up, and you're pelted with pies that stun you for a few seconds and leave you wide open to attack.

To reveal any more mash-ups would be to spoil many of the neat surprises each arena has to offer. But they're all well designed and span a range of games from Patapon to Killzone to the as-yet-unreleased BioShock Infinite. The environmental challenges they present, such as moving platforms, projectiles, and items like guns and swords, do stand at odds with the game's focus on technical prowess, but they can be turned off in versus mode, and for more casual matches, they do a great job of livening up the action.

For some reason, the game's visual flair hasn't made its way over to the menus that tie the whole thing together. It's a small thing, but it doesn't inspire confidence in a game when the first things you see are flat, pixelated menus laid over ugly gradients. Perhaps they're some kind of homage to classic 8-bit fighters, but whatever the reason, they are not an attractive sight. The arcade mode's character backstories aren't much better, consisting of nothing more than 2D images with a lot of Ken Burns effect.

Like with most fighters, though, multiplayer is where you spend most of your time, and thankfully Battle Royale's works a treat. Each match is completely customisable, so you can turn hazards and items on or off, set time limits, or choose how many kills are required for a win. Serious players will no doubt want to turn all the superfluous features off and concentrate on the battles at hand, but local matches against friends certainly benefit from the humorous mentality of exploding levels, and fish that you can slap opponents with.

Aside from local four-player matches, Battle Royale supports a variety of online modes. There's a hint of input delay, which might put seasoned players off, but on the whole matches are lag-free and work well. They include standard versus matches, team battles (two-vs.-two or three-vs.-one), and tournament play via ranked matches. There are also leaderboards that display your overall rank, supers per minute, and the number of times you placed first, second, third, and fourth. Cross play is also supported, so PlayStation 3 and Vita players can take each other on regardless of platform and work towards a place on the same leaderboards, which is a nice touch.

But it's hard to imagine those leaderboards being filled when Battle Royale is such a confusing proposition: it simply doesn't know what it wants to be. Its in-depth technical battle system suggests that this is a serious fighter, and it has the learning curve to match. And yet, it asks you to slap competitors in the face with a fish, or avoid the march of Patapon, when all you really want to do is concentrate on honing your skills. There are better, more fluid games out there for the serious fighter, and there are more accessible ones for those interested in a bit of silliness. In attempting to mix the two, PlayStation All-Stars Battle Royale merely ends up being competent at both and the master of neither. 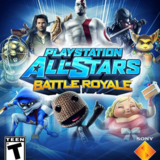