Back to the beginning

From the outset, Planet Alpha is purposefully vague about what is going on. Your unnamed protagonist, a non-entity in an unrevealing spacesuit, limps through a series of harsh environments during the game's opening. After a minute, they stagger and collapse only to awake in a new area. The how and why of this event and everything that happens afterward never become important. This is a game of mystery and discovery where you're never sure who you are, where you're heading, or why you're on this glorious, mysterious planet. Planet Alpha does not have answers to the questions you might have--it's a sightseeing tour of a planet that feels truly alien, by way of a 2D puzzle platformer.

The sights and locations you'll see and explore are varied, with each of the game's chapters taking you to a different environment. You move through catacombs, jungles, enormous architectural structures, and even across islands floating in the sky. There is beauty in every environment, but nothing beats the deep backgrounds of the game's numerous outdoor sections, which teem with life and a sense of history. It's clear that something has gone terribly wrong on the eponymous planet and watching it all unfold--occasionally becoming involved in incidents as they break out--is a pleasure. While you might leave without a clear idea of what just happened, there's a coherency to Planet Alpha that suggests some deeply established lore.

From its opening moments through to its closing credits, Planet Alpha is stunning. It's the sort of game that dedicated screenshot buttons were made for--you feel like a tourist taking holiday snaps, only you're coming home with pictures of giant squid-aliens, bioluminescent plants, and inter-species battles that break out in the distance. There's no UI on the screen, so you can really appreciate how beautiful everything looks. The camera often zooms out to let you take in the scope and beauty of your surroundings and the vistas that stretch to a distant horizon. A large part of the appeal is wondering what you might see around the corner.

Planet Alpha focuses on platforming puzzles--you'll frequently have to move climbable boxes and figure out how to avoid the hostile creatures and robots that inhabit the planet. There are no real head-scratchers though, and succeeding is mostly a matter of paying attention to your environment and timing your actions well. Getting past enemies usually requires either some rudimentary stealth (like hiding among foliage or behind a pillar until an enemy moves) or luring them into danger. This can be frustrating since the AI patterns of your enemies are unpredictable, but the feeling of relief in finally managing to lure a killer robot to its death is always satisfying. Several sections can be solved through trial and error, and running forward and getting killed is sometimes the easiest way to work out how to avoid getting killed next time--respawning is very quick, and changes you make to the environment persist.

For reasons never fully explained, you also have the power to rotate the planet with the shoulder buttons. At first, you're only able to do this in designated spots, but later in the game you can do it anywhere. This means that you can switch from daytime to nighttime, making use of the day/night cycle and the fact that some elements of the environment change between the two. For instance, during the day, a mushroom might appear as a platform you can jump on, and at night some plants awaken and unfurl, allowing you to use them as cover as you sneak through an area. Rotating the planet can also move elements within the environment, so a platform might rise or shift, or a door might open if you rotate in the right direction. These puzzles are interesting, but they're rarely challenging or clever, and while the world rotation ability feels inherently grand when you first start using it, there are no unexpected twists or new interesting wrinkles in how this mechanic works. There’s beauty in watching the shift happen, though, as luminescent plants glow in the moonlight and the dawning sun casts a glorious light across the planet.

Planet Alpha gets trickier when you're asked to perform death-defying physical feats. Large sections of the game feel reminiscent of Uncharted and its ilk, as you scramble up walls and leap between pillars, or slide down an embankment and jump at just the right moment to avoid falling to your doom. These moments can be quite exciting, and there are plenty of great scripted sequences throughout the game that see you just barely surviving as you run, jump and climb away from danger. But the controls can feel stiff in instances where precision is required, and sometimes you'll fall to your death because your last-microsecond jump didn't register or because you character doesn't grab the ledge for some reason.

This is an especially big issue during a handful of sequences that warp you into what seems to be another dimension, a trippy, dark void full of huge floating blocks where gravity is greatly reduced. These sections are weird, even by "mysterious game set on an alien planet" standards, but their pure focus on low-gravity platforming can be exciting at times. Flinging across long jumps is exhilarating--if you're on a moving block and jump from it right as it comes to a stop you'll be sent flying, which allows for traversal puzzles on a bigger scale than anything outside of the void. But these areas can also get frustrating when the physics aren't quite gelling and you're finding yourself being flung further than expected, desperately wishing you could wall jump off the floating pillars you're smacking into.

While there are moments of frustration in its platforming, and the puzzles are relatively unsophisticated, the locations of Planet Alpha will most certainly stick with you. It doesn't matter why you're there, or what it is you're looking for. There's great pleasure in just existing on this planet, in navigating its harsh terrain and admiring its vistas, and the sheer beauty of it all makes the game's shortcomings easy to bear. 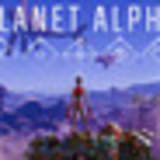 James O'Connor enjoyed how bright and beautiful Planet Alpha was during his eight-hour journey through the game. He's also wondering if it's time to replay Limbo, though. He played on PlayStation 4 using a code provided by the publisher.