Fun driving and an inviting world make visiting Planet 51 a pleasure in this family-oriented open-world game.

The animated film Planet 51 turns 1950's sci-fi about Earth being invaded by little green men on its ear. Life on the titular planet very much resembles the stereotypical vision of 1950's America, but the inhabitants are little green men (and women), and the alien invader is an American astronaut. It's a charming concept that has enabled the people behind the game to create an inviting world that younger players are sure to enjoy exploring--a world that meshes 1950's design concepts with hovering cars that are a lot of fun to drive. It has a few frustrating elements, but it's got plenty of appeal for children, families, and gamers seeking some whimsical amusement.

You spend most of your time in Planet 51 playing as Lem, the young, eager Planet 51 inhabitant who befriends NASA astronaut (and alien invader) Chuck Baker. Unfortunately, the only movie footage employed by the game is in brief, wordless snippets, and the story the game tells is an incoherent one that players may have a hard time making sense of if they haven't seen the film. The plot here is a paper-thin excuse to send Lem on all kinds of odd jobs, putting him to work as a paperboy, a courier, a dog catcher, a taxi driver, a parking-lot attendant, and a mower of lawns, among other things. The flimsy story is disappointing, but the variety of tasks it manages to toss your way keeps the gameplay interesting.

Many of your missions involve controlling a vehicle, so it's vital that the driving be enjoyable, and it is fun. The cars in Planet 51 resemble classic cars of the 1950s, except that they're round and hover a bit above the ground. This freedom from friction with the road means that in addition to accelerating, steering, and braking as cars do in any number of games, they can also freely strafe from side to side and leap higher into the air for a few seconds to get over obstacles or other cars. The handling is just a bit floaty, which feels right. (They are floating cars, after all.) And each vehicle can go into turbo for a short while, which is accompanied by a screen-shudder effect that contributes dramatically to the sense of speed. Reckless driving will result in pursuit by police, but they're very easy to shake off, and even if you're busted by the cops, there's no penalty aside from being transported to the nearest police station. So kids can enjoy a bit of mild GTA-style police pursuit in the harmless, lighthearted confines of Planet 51. All in all, driving in this game is easy, intuitive, and enjoyable.

In addition to the aforementioned jobs, you'll find yourself frequently forced to race against the arrogant Voorde and his goons. These races take place in the suburban streets, down urban canals, and through the desert. Adding to the excitement is a bit of satisfying roughness. When you're near rivals, you can tap a button to slam your car into theirs, knocking them aside and slowing them down for a bit with a terrific sense of impact. Less enjoyable are a series of destruction derby events in enclosed arenas, in which you need to plow into your opponents from the side or the rear to cause damage. Lining up these hits is difficult, and these missions can drag on long after they've ceased to be fun.

While the overwhelming majority of missions put you at the helm of a vehicle, there are a few exceptions. A handful of missions have you on foot as Chuck, avoiding obstacles as you run from one place to another. As Chuck approaches a fence, a closing door, or some other obstruction, you'll need to mimic a button sequence that appears onscreen to successfully avoid it and earn a time bonus. These missions are simple and less enjoyable than most of the vehicle-based missions, but they don't take long and contribute a bit more variety to the overall game. Then, there are a few missions in which you play as Rover, Chuck's small WALL-E-esque robot. These missions range from dull to frustrating. Rover moves too slowly to be fun to control, and his missions involve such mundane tasks as scanning for and collecting rocks. The camera also follows him too closely to give you a good sense of your surroundings, which is particularly troublesome on one mission where you must pursue an escaping dog down an obstacle course, but you can't clearly see what's around you. Thankfully, should you get fed up with this or any other mission in the game, you can bypass it after failing three times, which should help prevent younger players from experiencing too much frustration with the game.

After encountering any task, you can return to it at any time to complete increasingly challenging levels to unlock stickers and other collectibles. This option isn't very interesting, though, because the tasks are exactly the same each time. Returning to the taxi job, for instance, sees you shuttling the exact same people from the same locations to the same locations each time, with the only difference being that each subsequent level gives you a bit less time. As a result, it's unlikely that you'll feel compelled to come back to the game much once you've finished your initial play-through, which should take about six hours.

While it lasts, though, the world of the game is an enjoyable place to spend time because it's vibrant, colorful, and bustling. It's brimming with such charming details as 50's-style ads for soda fountains and planned communities. The vehicles are sleek and shiny, and the action maintains a smooth frame rate even during the fastest races. Story cutscenes are weak, however, with an unsettling lack of synchronicity between the moment a character appears to talk and when we hear the character speak. This is exacerbated by some weak voice work, provided by actors who, for the most part, sound nothing like their movie counterparts. The music, while sometimes too dramatic for the lighthearted action, is quite good, but the sound effects are not. At first, hearing radio noise emanating from passing cars seems like an impressive detail. But then you'll notice that you're hearing the same few snippets of radio chatter from every passing car, which becomes a kind of sonic torture.

There are a few local multiplayer options here as well. Two players can compete in races, demolition derbies, or hot bombs, which are basically a vehicular game of hot potato that can be fun in short bursts. It's clearly aimed at younger players, but Planet 51 is attractive and fun enough for even parents or older siblings to enjoy. If you're looking for a good game for some gaming kids in your life, chances are they'll enjoy a visit to the inviting world of Planet 51. 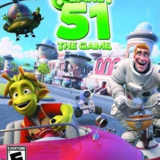 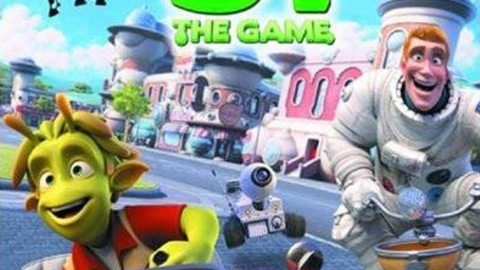 An action game based on the upcoming animated movie that features an "alien invasion" - a human landing on a planet full of aliens.