Imaginative puzzles and explosive boss fights are the most exciting elements of this sequel, but a new emphasis on shooting brings some frustration to the mix.

The gloves have come off. Whereas the original PixelJunk Shooter made shooting only a fraction of the core experience, high-stakes battles against a variety of gun-toting enemies are at the forefront of this feisty sequel. Lava-spewing machines, sound-sensitive bats, and all sorts of missile-sporting miscreants look to take down your modest ship in PixelJunk Shooter 2, and staying alive quickly becomes your number one priority. The shift in focus does mean your own death is much more probable than before, but the delectable puzzles that made the original so enticing still provide a guiding hand to give your actions a purpose. It's in the pacing that things sometimes go awry. There are stretches in which the difficulty squashes the free-flowing fun that comes with cruising through these colorful environments, and the repetition of replaying levels causes your forward momentum to slam into the nearest wall. But if you can survive the added difficulty, this is an inventive ride that requires fast reflexes and ingenuity to make it to the end.

Events concluded on a catastrophic note in PixelJunk Shooter. After making your way through the deviously designed caves in which your colleagues were trapped, your heroic ship was swallowed by a gargantuan worm just before the ending credits rolled. It was a dour ending, to say the least. Luckily, you have landed in the digestive tract of this disgusting beast no worse for the wear, and in Shooter 2, you once again must save your fellow scientists while trying to keep your humble yellow ship from meeting a fiery end. The core mechanics are largely identical to the original game. Your ship controls with a fluid grace that makes it a joy to glide past intestinal walls while gunning down the pesky critters intent on your demise. Your health is measured in heat; when your temperature rises, your ship starts to smoke. If you don't cool off quickly, you blow up and have to start the level over again. Enemy bullets are a frequent source of overheating, and you have to be aware of environmental dangers as well. If you veer close to that lava flow, your thermometer will whine. Your ship is equipped with standard guns, as well as missiles (which cause you to overheat if you fire them too frequently), and you have a grappling hook to rescue survivors and nab treasure.

The 15 stages that separate you from safety consist of elaborate mazes that force you to make clever use of your tools. You may have to carve a path through loosely packed dirt with your trusty gun, pull switches to open locked doors, and plant bombs to cause clenched orifices to relax. There are also a variety of liquid and gaseous elements with which to contend. Lava and oil present formidable dangers, but you can mix them with water to clear a safe path. A wide contingent of dangerous chemicals also exists in these underground caves, from hissing acid to bilious smoke, and figuring out how to dispose of these disparate compounds is a compelling endeavor that keeps you invested in the action. In addition to balancing the hot/cold dynamic, the last third of the game introduces another pair of opposites to juggle: light and dark. This last stretch ramps up the challenge considerably because dying in pitch-black sections can happen in a flash, and a lot of the carefree fun is sucked away as well. The simple joy of gliding through levels while you gun down enemies and rescue survivors is stripped away and replaced with a nerve-wracking test of your survival instincts. Coming out of this stretch alive is certainly satisfying, but it's a severe shift in tone from the early sections.

Challenge is layered in throughout the adventure this time around. Enemies are fierce and relentless in Shooter 2, and because you can die from just one shot, death surfaces early and often. Sharp controls ensure you can dispose of these lethal pests with a few quick blasts, but their frequent and unexpected appearances can often catch you unaware. Enemies appear in previously cleared sections after events are triggered, and if you're unprepared for a confrontation, you can die before you even ready your aim. The punishment isn't severe--you only go back a few minutes most of the time--but it can be frustrating if you have to replay the same level repeatedly because the unrelenting opposition is such a sure shot. Shooter 2 is still an immensely fun game when you get in a groove, but frequent deaths cause the pacing to grind to a halt at times, and the luster of these imaginative levels burns away when you're stuck in them for long stretches.

If things become too difficult, you can recruit a friend to help out. In the offline-only cooperative mode, two ships are unleashed in these subterranean worlds, which give you a chance to complete your task even if one of you gets gunned down. The levels are constructed for one player most of the time, so there isn't always something for the second player to do, but it's still fun to puzzle things out together--and an extra gun couldn't hurt. The difficulty comes to a crushing and thrilling peak in the explosive boss fights. The first such battle is a mere warm-up for what's to come. The second offering fully embraces the shooting heritage upon which this game was built, and though you will die frequently in this thrilling duel, it's an exciting rush to overcome its many deadly attacks. But it's the final boss that provides the exclamation you would want for an ending battle. Just about every trick you've learned throughout the adventure is utilized here, and tying these many pieces together into such an incredible fight will make you howl with delight. It provides the finest action sequence in either of these games and will leave a smile plastered on your face while you watch the credits roll.

An online, one-on-one competitive mode provides an exciting new addition to Shooter 2. Here, two players square off in a battle to see who can rescue the most survivors. Players take turns on offense and defense, and both sides of the coin provide their own satisfaction. On offense, you try to find stranded survivors littered across the playing field and bring them back to your base. It's a simple concept that's made difficult by the opponent trying to interfere with your goal. Your opponent has to gun you down before you make your rescue but has the disadvantage of only being able to see you when he has a direct line of sight. Defensive players have to track down their opponents using a truncated radar beam that extends from the ship, which results in a glorious game of cat and mouse. Offensive players have to move deliberately to come out ahead, securing the treasure while staying out of sight of their hunting foes. The only problem has to do with how the unlock system works. By playing ranked matches, you earn access to more weapons and gadgets, but this mode is at its best in unranked matches against someone you know. You have to invest a few hours playing against strangers before you can unlock most of the goodies for use against your friends.

PixelJunk Shooter 2 should be applauded for making the basic concepts from the original game feel so different, but the change isn't always for the better. The shift in focus from a mostly puzzle-solving adventure to one in which shooting takes priority isn't always smooth, and your frequent deaths can make repeatedly solving the same set of puzzles a drag. However, it is still a very good entry in the colorful franchise that adds enough new elements to make it worthwhile for veteran shooters to make a trip back under the earth. And the addition of a clever competitive mode gives you the added incentive to dive right into this game. PixelJunk Shooter 2 has some rocky portions, but clever puzzles and thrilling boss fights make it hard to put down. 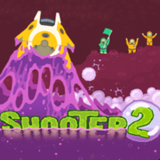 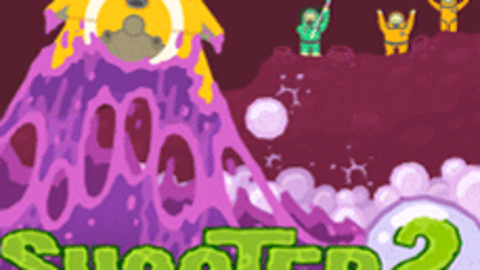