PixelJunk Monsters may not look like much, but you'll quickly get hooked on its simple, strategic gameplay.

A first glance at PixelJunk Monsters may not be entirely impressive, but you shouldn't let the game's plain, cartoony presentation discourage you from checking out this surprisingly addictive and charming experience. This is strategy for the masses, and it makes up for a certain lack of depth with mesmerizing gameplay and just the right degree of challenge. If you've got $7.99 to spend in the PlayStation Network and an itch for something a little different, you'll find plenty here to scratch it.

Those that played Desktop Tower Defense or the Defense of the Ancients mod for Warcraft III will have a pretty good idea of what PixelJunk Monsters is all about. Waves of monsters hike through the map on a predetermined path, and you must construct defense towers to take them out before they reach your village and kill the hula-skirted residents. To do so, you maneuver your little tribesman about the tree-laden level, turning trees into turrets and collecting the coins and upgrade gems fallen monsters leave behind.

It sounds simple enough, but there's a surprising amount of strategy involved. Tower choice and placement is obviously a key consideration, but you also need to be conscious of how you use your upgrade gems. You can use them to increase the effectiveness of existing towers, or you can use them to unlock new towers or other enhancements. You can also upgrade towers by standing next to them, which makes your avatar dance a jig while the leveling bar slowly rises. Not that you'll have a lot of time to do this, particularly in later levels, since you also need to skitter around to collect dropped coins and gems. Do you upgrade some cannons, or do you purchase that laser ground-to-air turret you've been hankering for? Do you let a couple of coins disappear in the corner while you dance around, or do you forgo your hip-shaking and explore the map, which could result in finding some random funds? This might be casual strategy, but you'll still need to think on the fly.

Even early on, you're not likely to win maps on the first try--and once you get to the harder ones, it'll take you a good number of attempts before you can congratulate yourself on a job well done. Yet as difficult as it gets, PixelJunk Monsters has a laid-back vibe, and the ebb and flow of monster attacks can be oddly hypnotic. The tinkly elevator music that accompanies your strategizing tries to add to the relaxed atmosphere, but it gets as grating as the constant jingling of wind chimes. Luckily, the austere, colorful visuals remain appealing throughout.

A second player can grab a controller and join you on the same machine. Co-op play does reduce the challenge, but it's also a blast to strategize with a friend. Yet whether or not a buddy joins you, you'll probably have a lot of fun with PixelJunk Monsters. It may not look all that deep, but you'll still squeeze a lot of enjoyment out of its 20 levels. 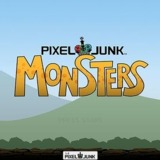 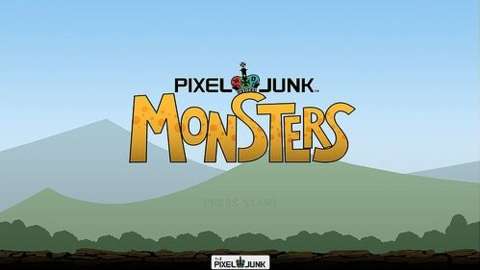 PixelJunk Monsters is an RTS game in which you build up your defenses to protect your base against threatening monsters.