Despite a frustrating difficulty level, the deep strategy and undeniable charm of PixelJunk Monsters will keep you hooked for hours.

PixelJunk Monsters was a big success on the PlayStation 3, bringing a unique twist to the tower defense genre, along with the inimitable PixelJunk style. However, as much fun as it still is to sit down and play on the couch, Monsters is a game that definitely lends itself well to handheld play. With PixelJunk Monsters Deluxe, developer Q-Games has not only faithfully transferred the game to PSP, but has also added a plethora of new content. With a brand new island, unlockable challenges and online multiplayer, PixelJunk Monsters Deluxe has enough depth and visual charm to keep you firmly glued to your PSP, despite some frustrating issues with its difficulty.

The concept of PixelJunk Monsters is similar to other tower defense games. You must protect your base of 20 vulnerable villagers from waves of monsters by building defensive towers around the map. The twist is that you must use your onscreen avatar Tikiman to convert the trees that are littered across the map into defensive towers. The addition of an onscreen avatar is significant because Tikiman is vulnerable to monsters rather than being an all-powerful deity. When he accidentally runs into an enemy, he'll lose gold coins--the currency used to build towers in the game. It's made all the more difficult by the fact that the only way to collect the coins is to pick them up from monsters that have been destroyed. This introduces some difficult decisions as you frantically run around trying to balance collecting coins with moving to other trees on the map to build towers.

There is a good selection of towers to choose from, and others can be unlocked within a level using gems, which are also dropped by fallen monsters. The gems can be used to upgrade existing towers, giving them faster reload times or increasing their weapon range. Using gems wisely is often the key to success because you must balance purchasing upgrades with building new towers. You can upgrade towers without using gems by standing next to them, causing Tikiman to dance a merry jig while the upgrade bar increases. However, this takes a significant amount of time, and in later levels, there are rarely enough free moments to make this plausible.

PixelJunk Monsters Deluxe includes islands from both PixelJunk Monsters and its Encore expansion, as well as a whole new island. Each island contains several maps to play on, and each map has its own twist. For instance, one level contains only a single bridge to gain access to your base, while another contains only four trees with which to build towers. It's difficult to complete a map on your first try, and though monsters move along a set path, it's only once you've familiarized yourself with that path and with the pattern of enemy waves that you'll know what towers to use and the best placement for them. There are different difficulty levels to select from: Casual and regular are available from the offset, and hardcore is unlocked after completing the game.

There are moments of frustration as the game occasionally throws out a wildcard enemy that may be invulnerable to electricity attacks, or suddenly decides that the river the monsters couldn't cross becomes passable. Most frustrating of all is the rainbow system used to unlock new islands and maps. Rainbows can only be collected by completing a map perfectly, which means not letting any of your 20 villagers die. You're unable to advance at all unless you've collected a certain amount of rainbows, even if you've completed all the maps in a certain section. While completing a level perfectly affords you access to unlockables and bonus content, requiring it to simply advance to the next level makes progress unnecessarily difficult.

Fortunately the charm of PixelJunk Monsters, coupled with its deep strategy, is enough to keep you playing those levels over and over just to attain perfection. The game also has unlockable challenges, exclusive to the PSP version, where you have to complete a level with a restriction, such as having a limited supply of gold. The graphics have a cartoon style to them, and the designs of the characters--even the monsters--is endearing. However, the jingly electronic music is repetitive and can start to grate after only an hour or so of play.

Alongside the single player, the game offers local co-op modes via ad-hoc, though there is no game sharing, so each player needs a copy of the game. New to PixelJunk Monsters is online co-op, allowing you to tackle any of the levels in the game with the help of another player. Up to eight people can join a room and text chat, though you'll have to pair off with just one of them to tackle a level. You can create rooms for others to join, choosing the difficulty, island, and region to play on, or search for other rooms by the same parameters. You can also jump straight into a random game via quick pick if you're in need of a spontaneous monster-killing fix. Players in a room that haven't yet started a game can keep an eye on others via a ticker tape commentary which scrolls across the top of the chat window.

The online gameplay combines both co-operative and competitive elements. Each player has his own Tikiman and must work towards the same goal of defending the village from waves of monsters. However, they also each have their own personal supply of gold with which to build towers, so as monsters drop coins it becomes a mad dash to try and collect them first. The game doesn't support voice chat online, but it does include chat icons such as hearts, question marks, and arrows. Holding down triangle brings up a circular menu, which you can scroll through to select an icon. It then appears above your Tikiman's head to let the other players know what you're thinking. The online play is lots of fun, and pairing up with a friend makes tackling some of the more difficult levels significantly easier. The game plays very smoothly over the internet, and we had no issues with lag or joining rooms. Unfortunately, because all of the islands are unlocked in multiplayer, any levels completed online do not show up in your single-player game.

PixelJunk Monsters Deluxe is the definitive version of this game, combining previous releases with all-new content and a robust multiplayer mode. If you can see past the occasionally frustrating difficulty, you'll find a surprisingly deep and charismatic strategy game that keeps you entertained for hours--even if you're tempted to throw your PSP at the wall every now and then. 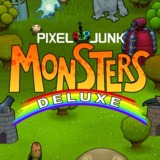 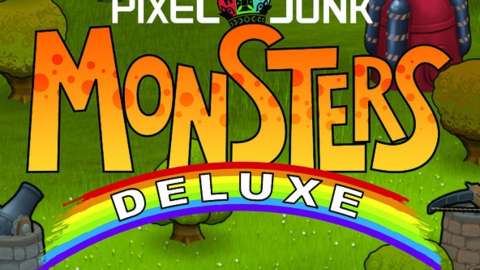 PixelJunk makes its way to the PSP featuring new towers and enemies.